An Interview with Singer/Pianist Freddy Cole

AN INTERVIEW WITH THE SINGER/PIANIST FREDDY COLE
NOVEMBER 7, 2013

NOJ: When did you first realize you wanted to make a career in music?

FC: You know, I never really thought about it. I never really distinguished between doing it or not because I have played the piano since I was five years old. So, I have always been involved with music. I was just fortunate enough for it to happen to me.

NOJ: You were in a musical family and were exposed to some of the most iconic figures in jazz history at an early age.

FC: I don't know. To pick out one would be kind of difficult, I have had wonderful experiences with Billy Eckstine, He was such a wonderful man. I played golf with him and went out for drinks with him, you know after I got old enough. I guess "B" would be the person I would have to choose.

NOJ: You had a great song you wrote "I'm Not My Brother I'm Me" which pretty much addresses the difficulty of living in the shadow of an iconic figure like your brother Nat ("King" Cole) and finding your own way. When do you feel the public was willing to accept you as an artist on your own terms?

FC: One time, I guess it '88 or '89, I was playing in NY and my niece and I went to church the next day- you know Natalie's younger sister- and I heard a sermon that kind of touched me. I started off going to try to right myself, you know going down the path of... in fact there is an old saying that Papa used to say " If you don't know where you are going , any road will take you there."  You know? (Laughing)

FC: Exactly. I was doing okay. I was playing around town, but I was on the same road. I was just going round and round  in circles. Until you can get to where your peers respect what you do, that is when you are making progress. When I was playing at Bradley's this one night, who comes in but Carmen McRae, Betty Carter, George Coleman you name it. You know I said to myself, 'They're all coming to see me.' Never knowing that they respected me, what I did.

NOJ: according to John di Martino, who has worked with you and arranged and played on several of your albums, you have one of the most extensive repertoire's in the industry to draw from, but you never make a set list before a show. Is this true?

NOJ: How do you spontaneously choose what your going to play for any particular show?

FC: I don't know. It's hard to explain, 'cause I just zero in on the it as I do the first song and then from there it's like boom, boom, boom ...you know.

NOJ: So it's a visceral thing? You feel the audience and feel what they are looking for and then...

FC: Yeah, its like all in the presentation, You have to present (properly) what you do.

NOJ: How do you look at lyrics when you sing a song?

NOJ: One of your contemporaries, Tony Bennett, likes to pick songs ( with lyrics) that mean something to him.

FC: Exactly. I don't do anything that I don't like. Anything you hear me do, you know I like it.
I like some (songs) better than others, but I don't do any songs that I feel I have to butter up or doctor it up. No, I don't do that.

NOJ: You mentioned Billy Eckstine.You did a great album dedicated to him titled
Freddy Cole sings Mr. B  from 2010, which was nominated for a Grammy award in 2011 in the
category of "Best Jazz Vocal Album." Congratulations. What was it about Mr."B"and his music that still endures?

FC: He was so musical and he was a classy person. It is so hard to talk about him, he did so many things right. His selection of songs was impeccable. You know during that era nobody recorded more than "B" my brother Nat, Ella ( Fitzgerald) and Frank Sinatra . Those four people recorded more than anyone.
Their music still stands.

NOJ: In reading about Billy Eckstine, he apparently credited Russ Columbo and Bing Crosby as two of his influences.

FC: Bing Crosby was a fantastic musician. People don't realize how great he was. His choice of songs, he did everything. There wasn't anything he couldn't do that was the same way "B" was.

NOJ: Where Crosby or Columbo too early to be an influence on you?

NOJ: You have developed a vocal style that is so naturally conversational and yet so intrinsically musical that it mesmerizes your audiences. Is this a result of playing gigs where the audience was not always attentive and you needed to grab them or did it just come naturally?

FC: (Laughing) well it's a little bit of both. I learned how to do this from watching and listening to Brazilian singers. I used to go to Brazil, I had a couple of hit records down in Brazil and I had a chance to meet and play with a lot of great musicians. They have a lot of great musicians down there who sadly will never be known up here. One thing always got me was the way they could really grab an audience. Elise Regina was a master at that. She was beautiful and she could sing, oh man! Maria Bethania was another.

NOJ: You have over twenty albums as a leader, starting with The Joke's On Me from 1952 all the way to your most recent album This and That. Do you have any favorites? 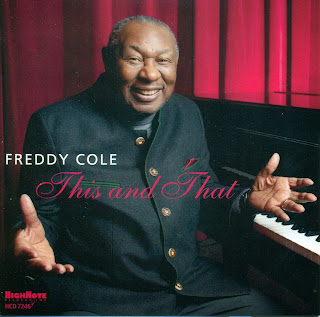 NOJ: You will be playing a duet with the vocalist Hilary Kole at the Stamford Center for the Arts Palace Theatre on November 13, 2013. What do you have planned for this gig?

FC: I have no idea. I recorded with Hilary once before " It's Always You" (from Hilary's You Are There album of 2010), so I am sure we will do that one and what else I don't know.

NOJ: One of the interesting parts of the "Perfect Pairs" series at the Palace is that it brings together two artists from different backgrounds, usually jazz and cabaret. Ms. Kole has worked in cabaret and she also worked at Birdland and the Rainbow Room and you have a repertoire that includes a generous helping of Broadway tunes. Is this a common ground that you might explore?

FC: I don't know, not until I talk to her. I have to speak with her and see what direction she would like to go with and what we could do together. Fortunately it's jazz music so it gives us a chance to do several things.

NOJ: What are the commonalities between jazz and cabaret?

FC: I am a firm believer in (not labeling)...people always have to have a title for something. Why can't they just let it be music. Or good music. Why does it have to be "Urban Contemporary Adult Music?" What is that? The "Nearness of You" or "Body And Soul" are the same I don't care what you playing at.
It's like Stevie Wonder's "Sunshine of My Life," that's music.I'm not putting any kind of music down, but why does it have to have a title? You have to say, oh this is a singer, he's this or she's that....I totally disagree with that.

NOJ: I guess when we writers try to describe and differentiate the many styles we hear we tend to use words to compare and to label,seemingly for clarity.

FC: Well they (writers) messed up a lot of careers with that. Some people try to fit in to whatever
(category) it is they say and if you keep bouncing around, not doing what your capable of doing or of what you can do best, well that is what you should do. Try to worry about your presentation, about doing that
(properly) instead of worrying about...oh, I 'm in Texas so I'd better do a Country & Western song. Or, oh I'm in California so I got to do a cool jazz song. That's crazy!

NOJ: But even guys like Sonny Rollins did a Western album (Sonny Rollins Way Out West from 1959)
that was successful.

FC: You why he did it? It was because it made sense musically.

NOJ: Ray Charles was another artist that would crossover into different areas to widen his audiences.

NOJ: Will you be playing with your regular quartet at the Palace show?

NOJ: Does Randy do some arranging for you?

FC: He has been arranging some of my material on the last two Cd's and he is doing a nice job.

NOJ: I understand your son Lionel is a talented musician and musical director in his own right?

FC: Yeah, he is a very fine musician. He is living in Australia now. He got married and he is living over there and is as busy as a one-armed paperhanger.

NOJ: It must be tough having him so far away?

NOJ: Thanks so much Freddy for  graciously spending this time to answer our questions. I look forward to seeing at you the Palace Theatre show on November 13, 2013.