Art often discovers inspiration in unexpected places. For trumpet talent Jason Palmer, inspiration came from a visit to the Isabella Gardner Museum in Boston, while attending classes at New England Conservatory of Music,  and seeing the empty stark frames on the walls, an eerie reminder that art was not immune to violation. 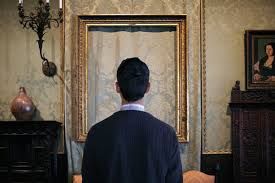 On March 18, 1990, the Isabell Stewart Gardner Museum was the scene of a massive theft- the purported single largest property theft in the world. Thieves posing as police officers, duped the on-duty security officers to let them into the closed museum, tied them up and in eight-one minutes proceeded to remove thirteen priceless works of art. They made off that night, over thirty years ago, to never be seen again.  It is an amazing caper for its gall and confounding success. Fortunately, there were no casualties, but like the famous parachutist thief D.B. Cooper, who vanished never to be found, these careful burglars were amazingly never captured or even identified. These gorgeous and priceless pieces of art, reportedly worth $500 million dollars, were never recovered and so, for now, the robbery leaves humanity forever the poorer.

For Jason Palmer, the artwork represented a series of beautiful stories in and of themselves. Although lost, they needed to be properly celebrated and memorialized. As an artist whose brush and easel was a chart of music and the voices of expressive instruments, Palmer went about to compose musical pieces that represent his concept of these lost works of art.

The album is titled The Concert: 12 Musings for Isabella and was produced by Jimmy and Dena Katz at Giant Steps Arts and features the potent and talented group of Mark Turner on tenor saxophone, Joel Ross on vibraphone, Edward Perez on bass, Kendrick Scott on drums and Palmer on trumpet and composer. The performance was recorded live in May of 2019 in the Harold S. Vanderbilt Penthouse at the InterContinental New York Barclay. 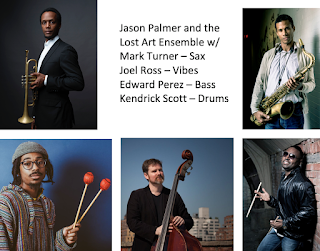 Palmer has taught in many universities and is an assistant professor at Berklee School of Music. He often plays with his own quintet at Boston’s historic Wally’s Café  and has appeared with many jazz prominent artists including Herbie Hancock, Roy Haynes, Phil Woods, Kurt Rosenwinkel and Wynton Marsalis’ Jazz at Lincoln Center Orchestra to name just a few.

Palmer and his astute bandmates have captured the aural aspects that the visual images that these exceptional artworks evoke. The staccato, darting pace of the music introduces you to Rembrandt’s rather decorous looking “A Lady and a Gentleman in Black.”  It features the tight, front-line synchronous work of Palmer and Turner. Palmer’s trumpet is precise and penetrative in his note selection. Turner offers a more resonant attack that darts in and out of the pulse. Ross’ sinewy vibes work nicely and complimentary to Scott’s rapid fired drum lines and Perez’s grounded bass. If the music is any indication, these two prim and proper figures of Rembrandt’s focus may have led a more robust life than their appearance seems to reveal.

Palmer’s clarion sounding trumpet leads off on Degas “Cortege aux Environs do Florence,” which is a pencil and sepia wash on paper, and one of the more understated of the works that were stolen. The mood established by Palmer and his group is atmospheric, carefree, and almost fanciful. Palmer, Turner and Ross each take turn soloing. The musicians are true to a feeling evoked by Degas’ figures, strolling on foot and leisurely being accompanied by horses on a procession through the pastoral scene outside of Florence. It is easy to imagine Degas’ revelers might enjoy this music if played for their enjoyment by a group of troubadours.

Degas’ “La Sortie de Pesage” is an expressive, muted watercolor that depicts a more urban setting that centers on the parading of jockey mounted racehorses as they saunter through the back streets of a city on race day.  The music has a rhythmic canter feel that in some ways mimics what the horses, in being walked through the streets of an 1850’s era European metropolis, might sound like. The music is carried rhythmically by the deft rhythmic whooshing created by Scott’s percussive mastery.

Perhaps one of the most valued artworks lost in the robbery was Rembrandt’s tumultuous “Christ in the Storm on the Lake of Galilee.” The scene depicts a ship with Christ and his followers overwhelmed by a squall in turbulent seas. Rembrandt has often painted his own image, with purportedly as many as ninety self-portraits known to have existed.  Here he places himself in this biblical scene as one of the terrified fishermen. His face is seen holding his hat in one hand and grasping the ropes to steady himself with the other. Jesus is sleeping during the storm, and according to the gospel of Mark, he is frantically awoken by panicked followers. The awakened Christ calms the wind and storm with his exclamation “Peace. Be Still.” stopping the storm and fortifying the greatness of his divine authority.

Musically Palmer opens this composition using Scott’s polyrhythmic drums as a tool that slowly builds the tumult in intensity, like a brewing storm. The front line of Turner and Palmer play lines in tandem, seemingly ascending with force like a cascading flow toward a pluming swell of water. The soloists alternate in quick succession over Scott’s tumultuous drums. This one captures the painting's fury aurally. They build the kinetic electricity of the rising storm until the group resolves the tension to a tranquil calm at the coda.

Two of the pieces taken from the Gardner heist were not paintings or drawings but artifacts. One was a Bronze Eagle Napoleon Flag Finial and the other a Chinese Shang Dynasty Ku (beaker) from the 1100-1200s.  Palmer creates a bit of a militaristic sound for his “A French Imperial Eagle” and on “An Ancient Chinese Gu,” Palmer's composition finds Ross’ vibes voice a tubular conversation with Scott’s percolating drums.

“Chez Tortoni,” by Manet, is a portrait of a well-dressed gentleman in a top hat with pen in hand, as he is gazing at the observer with intention. The music starts off with a probing bass solo by Perez that morphs into a percussive rhythmic exchange with Scott before it emerges into the full group playing energetically in unison. Turner creates a warm and pointed sound that just intrigues and Ross adds a full mellow and floating vibe that elevates the music to the ozone. Palmer's trumpet often can erupt with piercing lines but can also caress a tune with lyrical mastery. These are all talented musicians with distinct voices on their instruments.

“Program for an Artistic Soiree” is another Degas’ pencil sketch that features multiple ideas from the artist-smoke stacks, sailing Clippers, musical instruments, and ballet dancer-all miniature studies. With the diversity of the subject matter, Palmer composes what is the most traditional straight-ahead jazz piece of the cd. The music has a pulsing drive led by Perez’s bass and Scott’s drive. Each musician has an opportunity to be featured on a solo with Perez’s facile bass standing out on this one. This is a "live" recording so often you hear how much the audience loves what they are hearing. The music swings and Turner and Palmer work exceptionally well together, meshing counterpoint lines as dual leads that sonically merge beautifully.

Vermeer’s “The Concert” is one of the artworks that a musician can easily relate to. It depicts three musicians in a sitting room. Vermeer features two other artworks placed on the walls of the scene and a landscape painted on the piano’s open lid. As with all of Vermeer’s artwork, the light is hauntingly realistic and illuminating. Palmer and his cohorts use this composition to create a sonic expression of how a small house concert could be played- softly, sensitively, and with a simpatico between the musicians. This composition has its own beauty, freedom, and transcendence.

The remaining compositions include Govert Flinck’s “Landscape with an Obelisk” with some fascinating cymbal and drum work from Scott. Rembrandt’s “Self Portrait,” a celebration of multiple ideas from these musical minds. Degas’ “Three Mounted Jockeys” ends the set with this jaunty piece played robustly and with feeling by Turner. Palmer’s mastery of the high register is used poignantly here, and the talented Ross’ vibes modulate with a buoyancy that again elevates the music. Scott and Perez keep the music moving seamlessly.

If an artist’s musical creativity can draw you as a listener into the sources of his inspiration, then one can only appreciate the musician for his curiosity, creativity, and dedication. Palmer is an unusual artist whose imaginative music captured me with his The Concert:12 Musings for Isabella. Beyond his facility on the trumpet, Palmer’s compositional skills show a bright future. He has created some thoughtful and expressive pieces of music here and this project had the added reward of piquing my own curiosity to learn more about those lost Gardner masterpieces that inspired this work.