The musical path of saxophonist George Brooks is a serpentine one to say the least. He has always seemed to be attracted to slightly out of the mainstream artists such as the pianist Jaki Byard, the iconoclast saxophonist Jimmy Guiffre and trombonist Slide Hampton. He has studied with George Russell, played in orchestras led by Gunther Schuller and collaborated with the minimalist composer/pianist Terry Riley. Sometime back in the 1980’s he took two extended trips to India and there he became captivated by the music of this ancient land. He studied with and befriended master Indian vocalist Pandit Pran Nath, a friendship that lasted until the master’s death in 1996.

With a thorough understanding of India’s raga style he has played with many important Indian musicians both here and abroad. His association with master fusion drummer and one time member of the rock group Journey, Steve Smith, led him to form his Raga Bop Trio

with Smith and Indian electric guitarist Prasanna. His work with tabla master Zakir Hussain led him to be a featured artist on John McLauglin’s "Floating Point "

On Spirit And Spice

, Brooks has written and performed an interesting, sonically rich and rhythmically alive collection of music that successfully integrates two distinct musical forms, creating an alluring hybrid having its own distinct appeal.

From the opening salvo “Monsoon Blues” you get hit with a high-powered funk driven song. Electric bassist Kai Eckhardt’s keeps the groove in front of the syncopated beat of Steve Smith and the honky tenor saxophone of Brooks. Brooks has some Maceo Parker soul/funk going on here, perhaps a nod to his early days backing blues artists like Etta James and  Motown favorites like The Temptations. Toward the end the group adds some curried spicing to the tune by introducing a section with Indian multi-percussionist and vocalist Sridar Parthasarathy that turns this into a ragified funk, undoubtedly unlike anything you’ve heard before.


On “Spice” Brooks introduces a classical piano sound played by Frank Martin to the mystical bowing of Indian violinist Kala Ramnath and the twangy sitar sounds of Nildadri Kumar along with his own tenor, creating an exotic blend that carries you into the mysterious world of the bazzar. Brilliant interplay by Fareed Haque on guitar and Swapan Chaudhuri on tabla along with Smith’s amazingly empathetic drumming completes this journey into the depths of this far away land of antiquity and intrigue.


“Silent Prayer-Madhuvanti” is a seductive melody that Brooks plays with a clean, affirmation of someone who is comfortable in his own skin. Brooks work with Haque is crisp and synchronous as the two play in front of Smith’s ever increasingly driven back beat.

The most approachable song on the album is the forceful “Spirit”. Brooks plays the repeating melody line with a bright, forthright attack on tenor. Breaking the tension created by Brooks' high-powered introduction, Haque softly introduces a repeating guitar riff, accompanied by Martin on piano. The song reminds me a bit of Weather Report, sans the electronics, as it builds on a heavily driving beat laid down unerringly by Smith with Haque guitar and Martin’s accompanying piano chords.
(Photo by Stuart Brinnin)

“Lalita” features the eerie sounds of the bansuri, a wooden Indian instrument that looks and plays like a flute (here played by Ronu Majumdar) mixed with a haunting Indian vocal scat by female vocalist Hamiska Iyer. Brooks has a sensual Latin
inspired, almost Gato Barberi type sound on this number. Combined with the rain forest flute-like sounds of the bansuri makes this song an unusual cross-cultural delight. A few short bars from Santana’s “Black Magic Woman”

at the coda emphasize the Latin influence.

“Sri Rollins” has a Calypso-like beat that pays homage to Sonny Rollins work on his classic Caribbean inspired “St. Thomas”

. Brooks has absorbed many styles into his repertoire and here he shows just one more facet to his saxophone personality. Haque similarly does some nice guitar work ala Jim Hall.

“Pehkar for Hamza” is my favorite cut on the album, as it creates an air of spirituality and searching that is very moving to behold. Here the great tabla player Zakir Hussain’s wonderful and magical percussive skills are the perfect backdrop for the musings of Kumar’s poignant sitar and Brooks mellifluous saxophone. Hussain’s finger technique is amazing and Smith undoubtedly finds it invigorating to play drums along with such a kinetic percussionist. I suggest closing your eyes, turning up the stereo or donning the headphones and just listen to this wonderfully evocative piece of music.


“Casting” is the last song on the album and the only song that finds Brooks on soprano saxophone. This is perhaps the most new age sounding song on the record. A smooth melodious tune that is very easy listening and pleasant, but after the mesmerizing effect of the aforementioned “Pehkar for Hamza” somewhat of a let down for me as a finale. 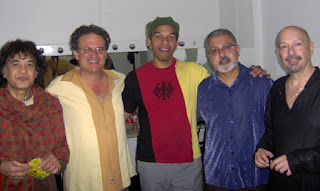 (In Picture l to r Zakir Hussain, George Brooks, Kai Eckhardt, Fareed Haque & Steve Smith )
All in all this is a fine, well-played album that successfully bridges the gap between Indian music and jazz in a way not heard since John McLaughlin’s Shakti

. With his  Summit group George Brooks may have found the perfect formula for melding  mysticism with modernity.