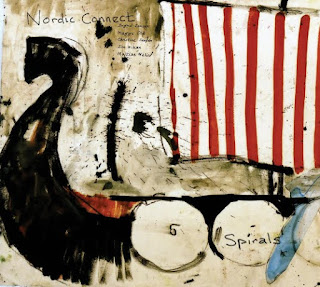 With the blood of Vikings running through their ancestral veins, Nordic Connect presents a challenging and inspired musical performance on their latest Artist Share release “Spirals”. The front line is made up of the Jensen sisters, Ingrid on trumpet and Christine on saxophones, who hail from the Canadian Northwest. The drummer John Wikan, an American who was born in Alaska. Only bassist Mattias Welin and pianist Maggi Olin ,who are Swedish born, are first generation Scandinavians.

On  "Spiral”, the music is challenging and harmonically full of surprises. Though atmospheric at times, the music essentially always retains some semblance of a melodic core throughout. Ingrid Jensen is a player who can soar on her trumpet with consummate ease and fluid grace. As an important member of the Maria Schneider Orchestra she is no stranger to challenging music. She has great command of her instrument usually choosing to play within the music, with little fanfare or grand standing despite her considerable virtuosity. She is adept at the use of electronics, adding an additional layer of texture to her music where she feels it is appropriate. 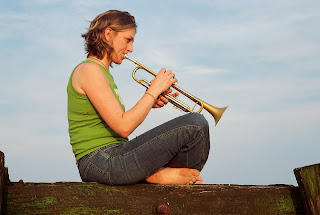 On “Spiral” she combines with her sister Christine, an accomplished saxophonist in her own right, to form a front line that plays with a masterful simpatico that only comes from years of familiarity.

On Maggi Olin’s serene “Travel Fever” the music slowly allows you to enter into a labyrinth of sounds as each instrument in the ensemble is introduced into the song. The band successfully build more and more interest, steadily adding layers of harmonic complexity on top of the forward moving rhythm with Wikan’s brushed traps keeping time.
It is this layering of sounds that captivates the listener’s attention.

“Song for Inga” is a waltz-like composition that alternates between soft pianissimo breaking into more aggressive fortissimo passages where Ingrid takes extended solos on her trumpet.Wikan crashes his cymbals to punctuate the change. Ingrid is given the freedom to solo in a wonderfully expressive series of measures. It is here she slowly reveals her virtuosity, her sure tone and her range of expression. She can deliver rapid-fire bursts in triple tongue that are bright and free of noise, cleanly building to a apex before her sister Christine enters in on her serpentine soprano over the pulsing rhythm section.

Ingrid Jensen’s “Earth Signs”, has a sound derivative of seventies Miles Davis, and is a combination of atmospherics laced with a sampling of funk..

Christine Jensen’s “Castle Mountain” has a rhythmic groove that features her on some darting, Shorter-esque soprano saxophone. Olin’s Fender Rhodes has an airy, distinctively seventies sound. Welin and Wikan keep time, as the front line play precisely in tandem. Wikam adds some percussive interest over the relentless beat maintained by Welin and Olin. It is the tasteful interplay that works so well to create this cohesive musical statement. 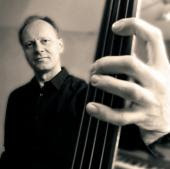 On “M-oving” Ingrid’s trumpet is muted. The distinctive compressive sound works well with Olin’s gracefully light piano. Jensen introduces the barest traces of electronics to her trumpet at the coda. The wistful “Yew” is a mellow composition that laces Christine’s soprano with what sounds like Ingrid’s flugelhorn, which she later switches to a muted trumpet. “66 Mike” features the two Jensen sisters playing in a duet that reminds me at times of the fine ensemble work of Jamie Baum’s recent group on  “Solace”.

Ingrid’s trumpet has an airy quality to it that is accentuated by Olin’s effective use of the Fender Rhodes. “Ballad North” has a somber, processional -like quality to it. “Brejk a leg” starts out with a some electronic enhancements that are actuated by Jensen’s trumpet. Christine and Ingrid alternate lines on  sax and trumpet and then join in a duet through a series of twisting lines. The song then breaks into a syncopated rhythmic groove that features Olin, Welin and Wikam, while Jensen intersperses tasty trumpet lines over the top.