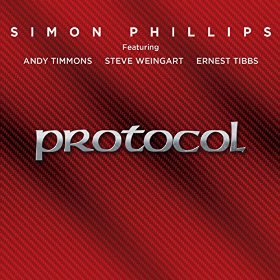 From the opening sound of Satnam Singh’s  tablas on the lead off song “Narmada” , a fusion piece of World music inspired by the late Weather Report keyboard wizard Joe Zawinal’s work with his Zawinal Syndicate, we are transported into the world of drummer Simon Phillips super group on his latest release Protocol III.  The former drum slinger, who has pounded his toms for the likes of Toto, the Who , Jeff Beck and Judas Priest has formed a monster group with chops to spare and a driving sound that resurrects my lost love of well played fusion music.  The group features Phillips on his enormous set of drums, the masterful Andy Timmons on guitar, the indefatigable Ernest Tibbs laying down his anchored bass lines and the creative keyboard artist Steve Weingart. Together these guys bring back the fun and awe of rock-inspired , jazz fusion. Labeling musical styles is a pointless exercise and clearly the emphasis of Phillips music is on technically proficient, hard driving rock, but no matter the album kicks butt. The band has absorbed some of the best sounds of the masters, Jeff Beck, Mahavishnu, Return to Forever and Weather Report to name a few.

The catchy “Imaginary Ways” is a case in point with Tibbs throbbing electric bass laying down the bottom and Timmons  tasteful  guitar singing out the repeated melody as Weingart layers the song with a myriad of electronic accents. The breaks are crisp and executed impeccably as they mix a  hard rock bridge that could satiate any head bangers desires. The rapid-fired, synchronous bridge at the end is a bow to Mahavishnu and a stunning display of precision.

“Outlaw” is just a down and dirty electric blues with Timmons doing some tasty guitar work clearly inspired by Jeff Beck’s body of work.   ”Catalyst” has the most fractious breaks creating and electro-mechanical sound driven by Tibbs relentless bass, Phillips thunderous driving drums and Timmons Jimmy Page like guitar solo.

On “Amirta, a billowy suspension of sounds that crescendos into a Return to Forever like romp,  Timmons  voicing’s takes on more of a Larry Carlton inspired sound, sustaining wonderful nuances from each note.  When Phillips isn’t laying down the sauntering  beat he occasionally pounds his toms into rolling submission and Weingart creates an aural backdrop of other-worldliness.


”Circle Seven” starts out as Timmons bow to Beck’s “Diamond Dust” period before it turns into a Return to Forever romp.  Tibbs lays down a gorgeous bass line that is then repeated by Timmons guitar before Weingart struts his Wurlitzer/Rhodes chops beautifully with Tibbs matching him skillfully on bass. Phillips interjects timely fills over and eventually yielding to a rambunctious and tumultuous drum solo. The song is  a hard driving celebration of synchronicity.  The album finishes off this excursion into fusion with the funky  “You Can’t But You Can” and  the drum heavy “Undercover.”   With Protocol III  Simon Phillips and company have provided  a skillfully executed album, strongly influenced by those who came before them, but that brings rock/jazz fusion back into relevance.

Posted by Ralph A. Miriello at 6:25 AM No comments: