With the first flurries of snow, the smell of wood burning in an open hearth and a brisk winter chill settling into the morning air, everyone is getting ready to enjoy a festive holiday season this year. Whether you’ll be trimming a Christmas tree, stringing decorative lights on your house or lighting a menorah these wonderful rituals are always better completed with some holiday music playing in the background. I myself can’t wait till Thanksgiving has past to bring out my stack of Christmas jazz.  My collection is an eclectic mix of old and new. Some of my favorites include Frank Sinatra’s A Jolly Christmas, Bing Crosby’s White Christmas, Ted Rosenthal’s Wonderland, Marcus Roberts’ Prayer for Peace and a couple of collections Jazz to the World and A Jazzy Wonderland to name just a few.

This year I got a chance to preview the new Joe Gransden Big Band Holiday recording The Christmas Song and suffice it to say I have a new album to add to my holiday collection. The Atlanta based bandleader/trumpeter/vocalist has put together a fabulous album with his knock out big band and a gorgeous string section that is a must have for anyone who loves their holiday music served up hot, jazzy and with some swing.

Balladeer Gransden has been leading his big band since as far back as 2006. Keeping such a large group together for such an extended period is a testament to Joe’s hard work and determination to preserve the big band sound. His rotating group of first-call, local musicians are all standouts, many of them performing nationally, some well-respected educators teaching a new crop of jazz students at prestigious universities, all dedicated to the greater sound of this big band.

Gransden has a medium timbre, silk glove of a voice that has been burnished by long exposure and careful study of such vocal greats as Sinatra and Bennett mixed with the more contemporary sounds of Bobby Darin and Harry Connick Jr.  He is an affable character who engages with his audience with a self-deprecating humor and a million-dollar smile.

On this album Gransden selects fourteen holiday songs, many old-time favorites mixed in with a sprinkling of the blues. All are rendered bristling and new by fresh arrangements that utilize the band’s big sound with a few augmented by a lush string section.

The opener “It’s Beginning to Look a Lot Like Christmas” finds Joe’s mellifluous tenor fronting a rousing arrangement by Jeff Jarvis which just propels you off your seat. The strong walking bass by Starkey and brief but bright piano solo by Banks is complimented by a gorgeous string accompaniment.

The children’s classic “Rudolph the Red Nosed Reindeer” features a wonderfully swinging brass arrangement by Wes Funderburk with Joe crooning away with true Sinatra swagger. The band cooks, as the big round sound of bassist Starkey takes a solo before John Sandfort wails on his tenor.

Christmas can also bring the blues to some and Joe’s Sinatra-esque “That’s Life” sounding version of the Charles Brown and Gene Redd “Please Come Home for Xmas” is made all the more poignant with some stirring saxophone work by altoist Mace Hibbard behind the Jeff Jarvis arrangement.

The band is given free rein to rock on the festive “Winter Wonderland” on an Eric Alexander arrangement.

Perhaps my favorite on the album is the very hip Jim Basile arrangement of the Nat King Cole favorite “Nature Boy.” The band just slays on this one and Gransden offers some of his finest trumpet solo work on this classic. Starkey and Varnes keep the pace swinging and Banks accompaniment is subtle and superb. Gransden’s voice is at his most sincere and he hits some difficult notes with a polished panache.

No holiday album would be complete without a version of “A Christmas Song” dutifully playing with a yule log burning in the fireplace in the background. No one can approach the iconic sound of Nat Cole on this classic, but Gransden does a credible job of singing it with humble believability. The big band is missing here, but for the bass, the piano, Sam Skelton on flute and Jeff Jarvis' flugelhorn backed by a sea of strings.

Another favorite is the slick arrangement by Wes Funderburk on the hip “Cool Yule.” I’ve never heard this song before, but it will easily be added to my Christmas song rotation at home. Here Gransden sings this swinger with a cool aplomb, encouraging the trombone section before rendering his own soaring trumpet solo. Vocalist John Hopkins lends his raspy voice near the end in a short duet with Gransden for the finale.

The band is given another chance to use its multiple voices on a frantic version of “God Rest Ye Merry Gentlemen” with another spectacular arrangement by lead trombonist Wes Funderburk. Tenor man John Sandfort gets the call on this one and tears it up on his horn as the band pulses behind him. Gransden gets another feature on trumpet which he uses to play a dancing solo that he brings to a soaring climax.  The band simmers to a boil.

The album continues with “It’s A Most Wonderful Time of the Year,” which is played in two different tempos.

The heartwarming “Have Yourself a Merry Little Christmas” is deftly arranged as a quartet piece by pianist Banks and opens with a muted trumpet played by Gransden that he overdubs against his own mellow vocal.

“Angels We Have Heard on High” is played with a big boisterous sound by the big band. This Eric Alexander arrangement calls for two trumpets at different registers often playing simultaneously, with Gransden taking the lower register solo and lead trumpeter Kevin Lyons taking the higher part, at times sounding very baroque in his attack.

The last two songs are both based on a Wes Funderburk arrangement of “Holly Jolly Christmas.” Drummer Varnes leads off with a cadenced snare solo that leads into a fun call and response saxophone duel between altoists Mace Hibbard and Sam Skelton. The band is pumping on this and Gransden’s vocal delivery is smooth and cheerful. They end the album with a brief reprise of the chorus.

If you’re like me and enjoy a month or so of holiday sounds bellowing throughout your home, then Joe Gransden and his Big Band’s The Christmas Song is a must have.

Posted by Ralph A. Miriello at 5:18 PM No comments:

The year is almost over and once again it’s time to highlight some of the best jazz that I have heard in 2017. There are undoubtedly many fine albums that I have not had the opportunity to have listened to,  so I am sure some deserving offerings will unfortunately go unrecognized by me and not make it to my  best of 2017 compilation. That being  said, I found a plethora of amazing, creative, diverse and inspiring recordings that I did get the privilege of listening to and my list includes some of what I consider the very best.

There were some notable debut releases by rising stars in this genre. Probably the most impressive vocal debut was that of Jazzmeia Horn on her A Social Call.  The woman just killed it with her superb instrument, amazing control , a rare sense of poise and vocal elasticity that was just a pleasure to be heard. Young Atlanta area drummer Dave Potter  made a surprising debut with his polished and propelled straight-ahead session, You Already Know.  The Hazelrigg Brothers fired a fine opening salvo with their crossover album Songs We Like.  Latin musicians made some terrific music this year with alto saxophonist Miguel Zenon's Tipico, Cuban pianist David Virelles' Gnosis and flutist Nestor Torres Jazz Flute Traditions all leaving us with some memorable music.

So, with no further ado here are my top picks for jazz for 2017 in no particular order. Where possible, there is a sample video or recording for you to listen to. Happy holidays and pleas continue to support live music and live jazz in particular.

If my feet were put to the fire to name the album that most impressed me this year it would have to be pianist/arranger/composer Billy Childs superb Rebirth. The album was a fountainhead of creativity played at the highest level. 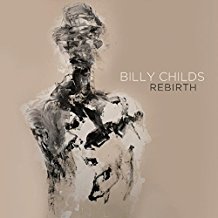 Drummer Nate Smith, whose been a first call musician backing many an artist, showed exactly how talented he is on his wonderful : Kinfolk: Postcards from Everywhere: RopeaDope records 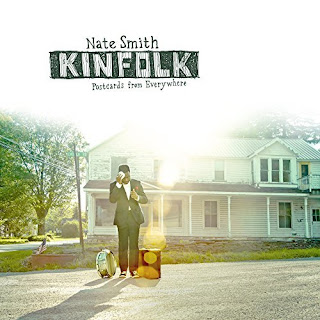 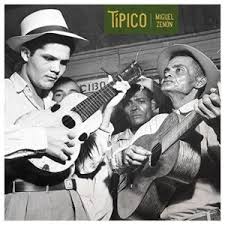 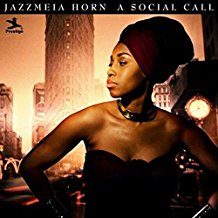 One of my favorite contemporary bass player/composers, the ever inventive Ben Allison and Think Free: Layers of the City: Sonic Camera Records 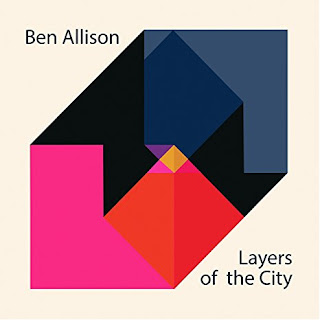 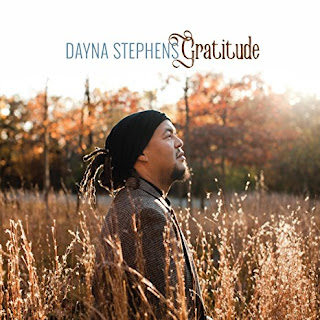 The irrepressible drummer Matt Wilson, finds a familial tie to the poet Carl Sandburg and his work on : Honey & Salt: Music Inspired by the Poetry of Carl Sandburg: Palmetto Records 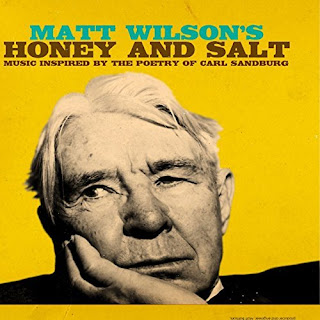 Steve Nelson: Brothers Under the Sun” High Note Records The master vibraphonist pays homage to a mentor and friend, the late Mulgrew Miller. 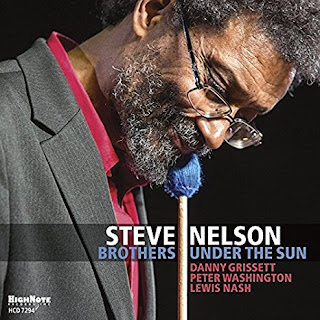 The mainstay alto saxophonist in the Jazz at Lincoln Center Orchestra comes into his own with this driving straight ahead jewel. 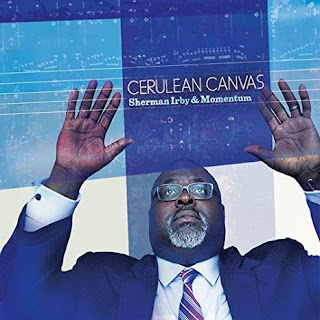 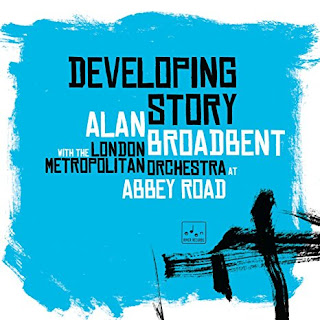 Brian McCarthy Nonet: The Better Angels of Our Nature: Truth Revolution Records
A fascinating big band work by a talented young arranger/composer from Vermont, inspired by a speech from Abraham Lincoln. 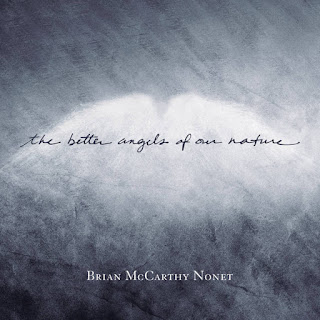 Ralph Towner: My Foolish Heart: ECM The virtuoso guitarist plays some beautiful music as only he can. 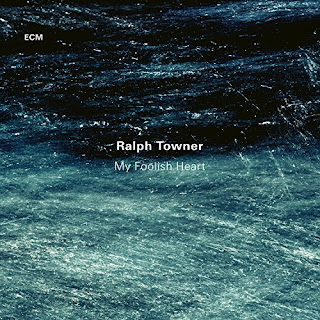 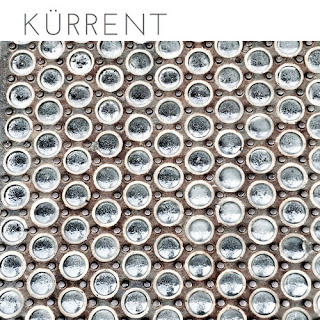 Pete Malinverni: Heaven: Sarana  The spiritual side of this pianist is given wings with a terrific supporting cast. 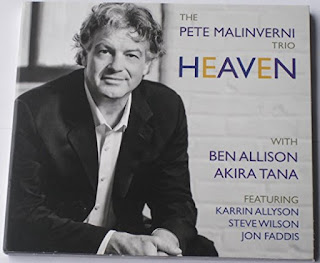 The Hazelrigg Brothers: Songs We Like: Self Released These two brothers and an intuitive drummer tackle a more modern repertoire with their own fresh approach. 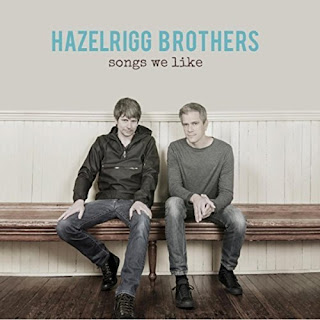 Mark Winkler: The Company I Keep: Café Pacific Records. West coast vocalist Mark Winkler is simply one of the most hip and interesting singers on the scene today. 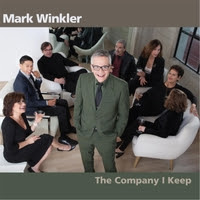 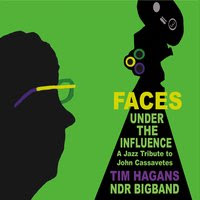 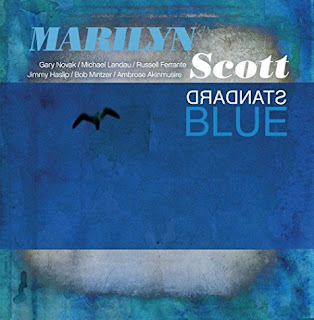 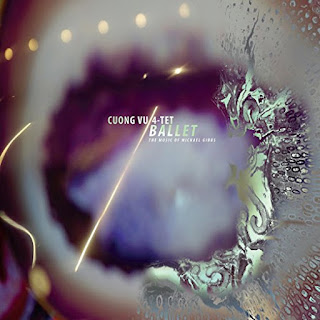 Dave Potter: You Already Know: Summit Records. This young drummer proves he has the mettle to make it to the top of his game. 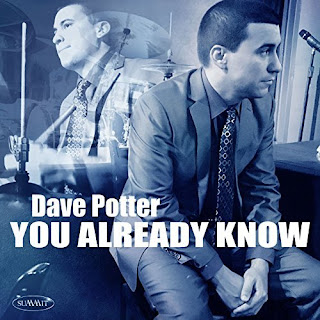 Saffron Ensemble: Will You? : Rock, Paper, Scissors. A true world music album that celebrates the Persian poetry of Rumi featuring the marvelous voice of Katayoun Goudara. 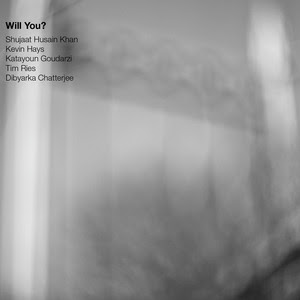 David Virelles: Gnosis: ECM    The Cuban Pianist explores the spirit world of his ancestors and incorporates a variety of percussive elements. 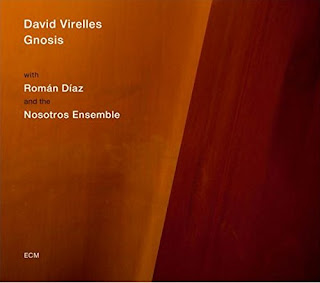 Dave Stryker: Strykin’ Ahead: Strikezone Records. The journeyman guitarist revitalizes the organ trio format with a stellar group of like minded individuals. 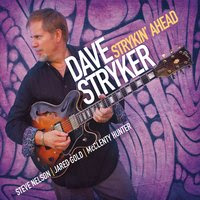 Nestor Torres: Jazz Flute Traditions: Alfi Records. A master flutist honors the past greats of the flute with a splendid album that demonstrates his mastery of the tradition. 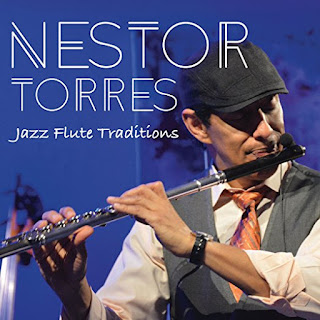 My pick for best historical re-issue: Two master saxophonists give an inspired performance in honoring one of their chief influences.
Dave Liebman and Joe Lovano: Compassion: The Music of John Coltrane: Resonance Records 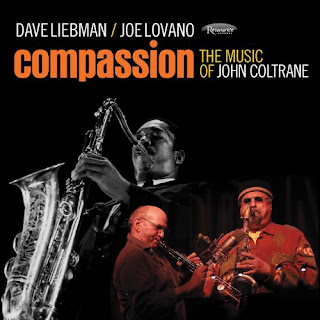 Posted by Ralph A. Miriello at 2:36 PM No comments: