The Danish guitarist Jakob Bro has a new album that was released in February and titled Uma Elmo, on the ECM label. The unusual name is the union of the two middle names of his young sons- seven-year-old Dagny Uma and seven-month-old Oswald Elmo. The guitarist used precious downtime, between his newborn child’s naps, to write some of the compositions for this latest release. The beautiful ebb and flow of the music undoubtedly partially inspired by his intimate and homebound exposure to his young sons. Like most artists, he was unable to tour and perform due to restrictions created by the global pandemic. The unexpected opportunity to be more present for his two sons became creatively inspiring.

I was peripherally acquainted with Jakob Bro’s playing, initially listening to his measured but effective work as a member of the late Polish trumpeter Thomaz Stanko’s group on his striking album Dark Eyes from 2009. With a little research and an enjoyable delve into more of Bro’s available music, I found the now forty-two-year-old guitarist’s work entrancing, thoughtful, and mesmerizingly beautiful.  Bro’s guitar work evokes ethereal elements reminiscent of John Abercrombie’s playing, crossed with the sustained, filigreed fingering that at times summons a comparison to Bill Frisell’s work. But to be fair Bro’s playing is more minimalist, not directly derivative of either, and all his own.

Jakob Bro has had an impressive career that has exposed him to a cadre of stellar musicians. One can only imagine how this exposure has had on the guitarist’s musical development.  The iconic drummer Paul Motian had a penchant for utilizing good guitarists. Besides enlisting Frisell and Kurt Rosenwinkel on different projects. Bro and Steve Cardenas became part of the late drummer’s second edition of his Electric Bebop Band from 2002 through 2005. In 2006 Jakob was part of Motian’s Garden of Eden, released in 2006, where Motian three-guitar battery including Bro, Cardenas, and Ben Monder along with saxophonists Chris Cheek and Tony Malaby and bassist Jerome Harris.

In 2009, Bro lead and provided the compositions for another date with Motian, Frisell, bassist Ben Street and featuring the alto legend Lee Konitz, titled Balladeering, which was part of a Trilogy project.  Bro’s compositions seemed to inspire a different element to Konitz’s improvising that the master enjoyed, and Konitz subsequently worked on two other Bro Trilogy releases, the drumless Time from 2011 and  December Song from 2013 which included pianist Craig Taborn.

The guitarist’s ECM debut album titled Gefion, was released in 2015 as a trio project with American bassist Thomas Morgan and the legendary Norwegian drummer Jon Christensen. He later released a second album Streams with bassist Morgan and the equally intuitive American drummer Joey Baron.  This trio was well-matched, toured extensively, and released another album Bay of Rainbows in 2018. 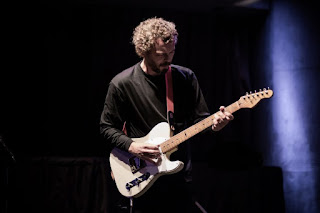 If you can put a tag on Jakob Bro’s compositional tendencies, you might be inclined to listen to what Lee Konitz once said: “It’s not folk, it’s not jazz it’s not pop music, it’s not funk, it’s just Balladeering…”  To me, the one element that Konitz omitted was the mesmerizing beauty of Bro’s music. The guitarist was originally trained on the trumpet before switching to the guitar when he discovered Jimi Hendrix. His music can employ voice-like phrasings that may well have been influenced by his exposure to trumpet. His music can be very meditative, atmospheric, and beautiful.

Bro’s gossamer-like “Reconstructing a Dream” is a composition that the guitarist wrote and recorded in New York, now thirteen years ago, with Paul Motian, Kurt Rosenwinkel, and Ben Street. It is a gossamer, wispy composition that floats in the air like a phantom, an elusive memory that you might have while trying to recall a dream.  Bro’s burbling, almost wind-chime evoking guitar work, sets the mood with a soft-spoken repeating sustain. Hendriksen’s emotive piccolo trumpet searches the depths of the mind with a probing, Pan-like, voice that hovers like a cloud, and Rossy’s intuitive percussive accompaniment is nothing short of poetic.

“To Stanko” is a dedication to the late, Polish trumpeter Thomaz Stanko, who Bro played and toured with for five years. Stanko’s ability to evoke so much with so little was his trademark approach and his influence on Bro is palpable. Here Rossy opens with a sparse rolling tom intro before Bro’s lyrical finger-picked melody is introduced. Henriksen’s trumpet is delicate and flowing, more meandering than Stanko’s sparse style, but played with remarkable sensitivity. His playing honors the memory of the master’s approach without mimicry.

While attending Berklee in 1998, Bro composed “Beautiful Song” as a task presented to him by his then-teacher, saxophonist George Garzone. The exercise required the guitarist to compose a song with a complicated atonal line. He must abandon specific time, rhythm, or melody and still manage to make a musical statement. Bro creates a gauzy, undefinable backdrop on which trumpeter Hendriksen and percussionist Rossy conduct an asymmetrical conversation, responding to each other’s improvisation.

“Morning Song” was originally an unnamed composition that the trio started playing every morning at the studio in Lugano. Producer Manfred Eichner took it upon himself to appropriately name it “Morning Song.”  The cd ends with a second variation of this slowly unfolding musical representation of being gently pulled into the new day. Bro has an unassuming presence in all his compositions. His approach is to set the barest of musical stages, an almost Stanko-like minimalism identifying his fretwork, establishing a mood and beauty. Bro utilizes some sparse electronics to create an unobtrusive palette that allows Hendriksen and Rossy to explore their musical relationships. The music allows interaction and inspires the trio's improvisational possibilities.  The music appears incredibly simple but the result is remarkably lush and moving.

As a pandemic, stay-home parent, Bro found himself having more time with his two young children and inevitably became engaged with housework inspiring his composition “Housework."  Hendriksen’s deep-toned trumpet has an almost saxophone-like flutter at the opening. Rossy’s precisely placed percussive accents respond, at times creating unexpected bird-like sounds that are hard to identify. Bro’s guitar opens with a lyrical line in contrast to his partners. The music has a busy feel that captures the mundane domestic chores represented here. There is a great deal of creative license used here by these musicians and to really appreciate it you have to emerge yourself in it with no expectations.

When Jakob Bro played with the veteran Lee Konitz, he noticed the altoist always had a curious mind. Despite his age, Konitz was incessantly trying to understand where a musician might get inspiration for a composition. One day while playing the album “Balladeering,” at his apartment, Lee noticed how a black pigeon landed on his windowsill and listened to the entire album before flying off.  Konitz, always the joker, called Bro up to let him know that he now understood that the guitarist’s music appealed to the black pigeons, and then hung up laughing. Bro thought it only apt to name a composition in honor of Konitz’s observation and thus “Music for Black Pigeons.”  The three musicians, who had never played before this session, were able to demonstrate an amazingly telepathic interaction. Bro’s ethereal guitar lines, Rossy’s sparse toms and shimmering cymbal work, and Hendriksen’s hauntingly searching trumpet lines meld like a sorcerer’s amalgam of continuity.

Composed almost twenty years ago, “Sound Flower” is revisited by this new trio and is a song that is dear to the guitarist's heart. Hendriksen’s piccolo trumpet is a new sound to me, and sometimes almost feels like you are hearing a flute. This artist has an eerie talent of capturing tonal moods that he needs for each moment, defying what you might otherwise expect to hear from a trumpet. Bro creates an electronic fabric of sound, a kinetic aura and Rossy is so tasteful you almost miss the subtly of his fine playing.

The last song is “Slaraffenland,” written by Bro in 1999, and originally performed on a European tour by the then young Bro as a member of Paul Motian’s Electric Bebop Band. The band included his luminary Motian and fellow guitarists, Monder, Rosenwinkel, and Cardenas, plus saxophonists Malaby and Cheek and bassist Harris.  It was a heady time for Bro, many talented voices were at hand. Here he revisits this composition and makes it more personal with the trio format. Bro opens the short piece with a few harmonic notes resonating with sustain to decay. Hendriksen’s delicate trumpet pierces the gauze and states the melody charmingly, almost hesitantly, but beautifully. Bro and Hendriksen match notes like brothers in sync before Bro’s filigreed finger work accompany the trumpeter’s solo to an apex.  There is deceivingly folk-like simplicity to this song that belies the depth and heartfelt feeling this song can evoke.

Jakob Bro's Uma Elmo will engage and entrance anyone who believes that music can be thoughtfully created and beautifully executed using nuance and passion.

Posted by Ralph A. Miriello at 4:06 PM No comments: