The bassist Eric Revis has been known as an integral part of Brandford Marsalis’ Quartet since 1997. He has also worked with musically diverse musicians spanning from the progressive pianist Jason Moran, to the avant-garde drummer Andrew Cyrille, the unique vocalist Betty Carter and the iconoclastic guitarist Kurt Rosenwinkel. In 2017 Revis received a grant from The Rockefeller Foundation where he spent some time in the Kykuit estate writing. The contemplative time this grant allowed Revis, produced these eleven compositions on his latest release Slipknots Through a Looking Glass, where he utilizes an unusual approach to composition.

Revis develops a collection of what he calls "sparse" musical possibilities, as he likens them to an archipelago of "islands,"  that he then presents to his band as a range of ideas that have to be navigated through. He hard scripts some of the music, but he also allows impressionistic, free collaborating by his bandmates. He encourages extemporaneous developments that emerge from his unwritten concepts emphasizing textures, colors and rhythmic variation. The band includes Revis on Bass, Kris Davis on piano, Bill McHenry on tenor saxophone, Darius Jones on alto saxophone and Chad Taylor on drums and Mbira (African thumb piano) and Justin Faulkner on drums (tracks 1 and 3.)

Revis is approaching this music as a journey into unexplored territory. There are almost no traditional melodies per se. The album is dedicated to recently fallen jazz artists Ellis Marsalis, Henry Grimes, Lee Konitz and Wallace Roney, and to Junius Taylor the late Professor Emeritus of Physics at Morgan State University.

The album includes a three-part take on his lead composition, “Slipknots Through A Looking Glass,” where he is predominantly playing solo pizzicato bass utilizing textures ( I hear what seems to be overdubbing of low volume higher-pitched arco lines in the background) and deeply burnished tones that follow a rhythmic path. There is some purposeful magic in Revis’ choice of his title's reference to slipknots. The album’s art cover features a series of duotone photos by Sam Ekwurtzel that depict various wood knots leading you to consider the relationship of the wood knots with Revis’ music. But a slipknot is generally referring to a tied rope knot similar but distinct to a noose knot. It is used to allow the rope to slip through the knot itself and in sailing it is sometimes used as a stop knot. The dichotomy between wood and rope knots is confusing. But Revis makes the incongruity more mind-bending by the title's addition of the idea of seeing a slipknot in a looking glass or mirror. Is the slipknot there or is it a figment of your imagination?  Revis is not telling his listener. He cleverly sets up this music as a mystery that doesn’t follow traditional paths or conventional forms for that matter. No matter how attentive, your musical attention is sometimes slipping through the knot he creates.

Many of the songs have their own characteristics. Opener “Baby Renfro” has a jagged feel and features the full band with Faulkner on punchy drums and a unified front line.

“SpÆ” is a mystical sounding, spontaneously driven piece with Davis’ dreamy piano, Taylor’s rhythmic Mbira and some arco bows on bass. The music is like an excursion through an impressionistic jungle of the future.

“Ear & Three Fifths Compromise” has a moody, thriller-like sound with Faulkner and Revis keeping the drone-like rhythm. The two saxophones meander with McHenry and Jones playing in counterpoint to each other as Davis’ piano adds delicate pianistic accents.

“ProByte” is one of the more classically inspired, melodic pieces on the album. The music features Davis playing the piano strings harp-like at the opening. The saxophones play harmonically together as Taylor offers a syncopated drum backdrop and Revis adds a plump, firm bass line.  Davis skillfully accentuates with shimmering lines that flow over the music. The music ends with a repeated melodic line that fades to a memory at the coda.

“House of Leaves,” a free-formed piece of spontaneous concepts, is opened by a conversation between Taylor’s drums and Revis’ bass.  Davis and the saxophonists add textural interest to the music as the two build upon their communication.

“When I Become Nothing” is a short ballad with some of the friendliest qualities to the casual listener. A simple relatable melody that finds each player meshing their arts beautifully and playing with delicate sensitivity, establishing a peaceful, almost hymnlike sense of presence.

“Vimen” opens with Revis rapidly manipulating his strings to create an unsettling rasp of sound. He and Taylor join in an energetic transfer of ideas that seem to have no defined direction. Davis joins the fray with her own off-kilter pianistic energy and dissonant accents. The three create a whirlwind of tumult and furry that is then joined by the two saxophonists in a boiling brew of unsettling freneticism.  Not for the lighthearted.

The bassist has proven he has all the skills he needs to play some of the best of music and some of the most challenging as well. With Slipknots Through a Looking Glass bassist Eric Revis has explored the outer edges of impressionistic music that surely challenges and for the open-minded delight the listener.

Here is a link to some of his music on Bandcamp.

Posted by Ralph A. Miriello at 1:53 PM No comments: 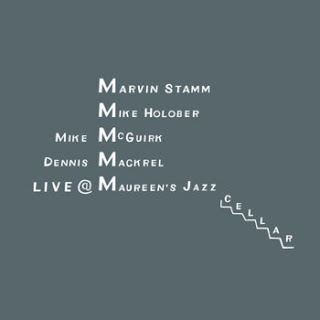 Posted by Ralph A. Miriello at 1:30 PM No comments: