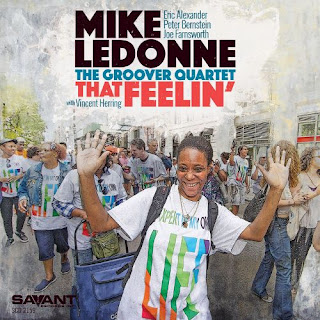 As I have always been a sucker for the captivatingly diverse sound a good Hammond B3 can deliver under the right hands, I thought I would listen to the recent release by organ magician Mike LeDonne and his well-established Groover Quartet titled That Feelin’. Le Donne is one of those journeymen that has been around honing and plying his craft for years and it shows in his complete mastery of the complex piece of electro-mechanical equipment known as the Hammond B3. Mike and his quartet have been playing a regular residency for years at the upper west side jazz haunt Smoke. His bandmates include tenor saxophonist Eric Alexander, guitarist Peter Bernstein and drummer Joe Farnsworth, each a talented player in his own right. Together under Le Donne’s leadership these guys have developed a finely calibrated musical machine that just hums along making the art of cooking look deceptively easy. But that’s exactly what playing weekly in a steady residency produces. Sadly, there are not enough of these residency-type gigs around for musicians. If you are in the City and you can  catch these guys at one of their weekly sessions you will not be disappointed.

On That Feelin’ LeDonne and company lay down some pretty incendiary tracks. The cd opens with two of LeDonne’s compositions “I’d Never Change a Thing About You,”  a song written by LeDonne for his twelve year old daughter who has multiple disabilities, and the title cut “That Feelin’.” On the first, the music pulses with an assured confidence. LeDonne’s fluidity is on par with the great ones on the instrument and Farnsworth knows how to maintain that swing with the best of them. When Alexander enters with his deep throaty tenor the music pops. Guest altoist Vincent Herring, another Smoke alumnus, adds his own soulful sound to the mix. Facile guitarist Bernstein lets loose with his own slick solo and Farnsworth is giving a brief chance to show off some of his thunderous chops.

“That Feelin’” is a bluesy, jaunt that is in the Jimmy Smith tradition. Bernstein’s gritty guitar work is both tasty and soulful. Alexander’s rasp on the saxophone cries out with attitude.  LeDonne’s marvelous mastery of the multiple pull bar variations of his keyboard are on display here and they are a treat to behold. LeDonne’s personal experience of having to deal with people who look at the disabled as somehow “defective,” as he states in his liner notes, has steeled him. His reaction is to make music that percolates with joy and attitude. The music says; look at me, I maybe different but I’ve got “That Feelin’"

The Groover Quartet takes on the Delfonics R & B classic, “La La Means I Love You.” Farnsworth’s reliably steady backbeat is the backbone of this one. LeDonne again shows his plethora of ideas on his keyboard. His use of sustained pedal point is marvelous as he modulates the sound introducing a whirring fusillade of notes and changing it up with multiple pull bar variations.

Donald Byrd’s “Fly Little Bird Fly” is a cooking, double time speedster. Alexander has his work cut out for him as he solos over LeDonne’s quick paced left foot driving bass line. Guitarist Bernstein is no stranger to speed and he navigates this road race gracefully with an easy aplomb. 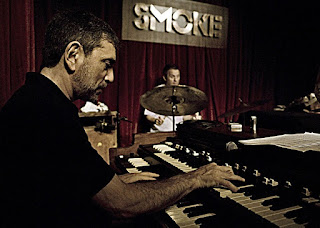 On bassist Ray Brown’s gutsy “Gravy Blues” we again have the two horn front line with guest Vincent Herring joining the quartet. His Cannonball-like alto is featured as the first solo and he does a marvelous job of evoking a feeling of rawness and sensuous soul. Alexander follows on tenor with an equally compelling voice. Bernstein’s guitar offers the mellower side of the blues, and Le Donne returns for one last round using a “dirty” sound that contrasts perfectly with Bernstein’s more refined tone.

LeDonne’s “Sweet Papa Lou” is another double timed composition dedicated to saxophone legend Lou Donaldson, again featuring the two horn line of Alexander and guest altoist Vincent Herring.  Another   R& B classic, “At Last,” made famous by Etta James, is given a Groover quartet treatment. Arranged by LeDonne as a slow shuffle, it is a beautiful song and the perfect ballad to give guitarist Bernstein a chance to show off some of his tasteful chops. LeDonne is also given some room to expound on the theme with his multiple voices to great effect.
Keeping with the R & B feel of the whole album, the group does an arrangement of “This Will Be An Everlasting Love.” The group has fun with this one. Farnsworth lays down the beat as LeDonne works his magic around the changes. As with much of the music on this album the songs just swing their butts off with a genuine joy of cooking.


The finale is “A Lot of Living’ to Do” a burner that features Alexander’s tempestuous tenor showing why he is one of those players that can realty turn it on when he wants to with no discernible loss of clarity at any speed. Farnsworth tumultuous traps and dinging cymbals pulse the beat forward flawlessly. Bernstein is pushed to fleetness as the group keeps on a tear. Le Donne seems at home with cookers like this, high speed challenges that test the mettle and vitality of the players. With That Feelin’ Mike LeDonne has indeed made a “feel good” album that he and his fellow groovers can be proud of.

Posted by Ralph A. Miriello at 3:52 PM No comments: