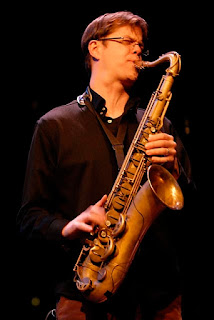 Saxophonist Donny McCaslin is a stalwart of the New York jazz scene and has played as an effusive sideman for many of New York’s finest musicians. He usually can be found as a member of the Maria Schneider orchestra as well as the Mingus Band and has lent his talents to the works of pianist Danilo Perez, vibraphonist Gary Burton, trumpeter/composer
Dave Douglas and the progressive group
Steps Ahead ,where he replaced the late Michael Brecker. His development as a both a player and a composer of his own music has been like watching a rare flower unfold before your eyes. From his recent recordings as a leader
“Recommended Tools”

, McCaslin has left an ever expanding palette of music to listen to and savor. On this latest offering, he was purportedly nudged by friend, producer and fellow saxophonist David Binney,
to work in a more electric format.

From the beginning notes of this new album from the saxophonist, you can feel the energy and enthusiasm that has been injected into this effort. With a rolling fusillade of action packed into the opening by master drummer
Antonio Sanchez, “Five Hands Down” sets the tone for what is to follow. McCaslin’s angular attack is filled with aggression and frenzy, as he pierces the high register of his horn or stabs with punctuated notes in conversation with Sanchez.

On the title track, “Perpetual Motion”, McCaslin circuitously plays in concert with the Fender Rhodes and acoustic piano sounds of Adam Benjamin before he states the fragment of a melody that catches your attention, an ever escalating cry of exclamation. Tim LeFebvre’s bass and Sanchez’s drums follow McCaslin’s explorational solo, a cascade of notes, a plethora of changing tones, with multiple variations of attack and timbers. A demonstration of free and inspired playing. Benjamin takes an airy solo that makes perfect use of the Fender Rhode’s s late seventies fusion sound. When McCaslin returns to his barest of melody lines, in the last quarter of the song,  he whips it into a frenzy of poignancy.

The composition “Claire” finds McCaslin honking away in a staccato exchange with Sanchez. It is these dueling masters that make for some of the most memorable moments on the album. Sanchez seems to be everyone’s drummer of choice these days and it is easy to see why, as he is a master of percussive communication with seemingly inexhautible vitality. McCaslin, for his part, alternates between high screeches to mellow, low register sustained notes. Benjamin is again effective in utilizing the unique sound quality and feel of the Fender Rhodes. As Sanchez and Lefebvre dance in the background, Benjamin takes us on an astral adventure that is delightfully buoyant. 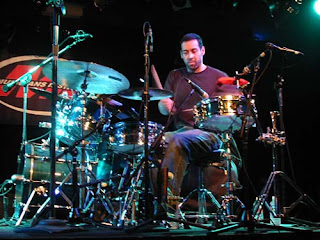 Much of McCaslin’s music uses the barest armature of a structure, be it melodic or rhythmic, upon which to build his musical excursions. On “Firefly”, the use of electronic sounds, presumably by Binney and Benjamin over Sanchez’s cymbals, set the background for McCaslin’s saxophone wandering. He flutters through the electronic haze like a firefly through a fog before reaching for daylight and clarity towards the end of the piece.

“Energy Generation” has a backbeat that that allows McCaslin to stretch out his more funky side, but even in this vein his playing has a sense of urgency and a lack of cliché. With Sanchez and Lefebvre driving the beat you can’t help but feel the groove.

The second part of this album takes a sharp turn into funky town and seems a bit disconnected to the first part. On “Memphis Redux”, the energy level is palpably turned down a notch to simmer like a slow cooking gumbo. McCaslin’s soulful side is on display here and he has some fine moments of raw, gutsy playing. Benjamin’s solo on piano is peppered by electronic sounds from Binney, making this music sound less dated.

On “L.Z.C.M.” the sound is an electronic funk with a driving beat by Guiliana and Benjamin on Rhodes. Despite the plethora of electronic sounds and McCaslin’s  clarion saxophone work, there is less excitement and less continuity to my ear.

“East Bay Grit” is thirty seconds of fading into a groove.

“Impossible Machine” has a quick paced, complex line that features a splendid duet with Binney on alto and McCaslin on tenor pacing each other in precise synchronicity. This is drummer Mark Guiliana’s best work of his four cuts on the album. McCaslin and Binney play extremely well together and the ending is tart, crisp and surgical. 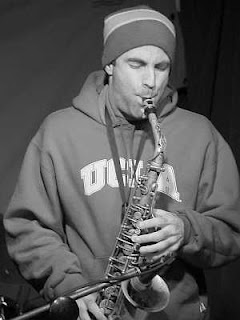 Uri Caine’s solo piano on the finale “For Someone” is a pretty ballad but somewhat detached from the rest of the album and in my mind a strange way to end what is on balance, such a high energy outing.