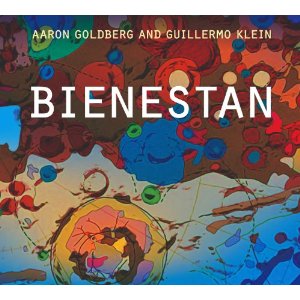 Recorded at Systems Two, Brooklyn, NY
May 13th & 14th 2009
The Argentinean composer and pianist Guillermo Klein is an enigma. He originally came to Berklee in Boston back in 1990 to study with his contemporaries and then moved to New York from 1993 to 2000 to actually play with them. During his relatively brief stay, his impressive compositions and the arrangements for big bands attracted many of the young, up and coming musicians in the area, like bees to nectar. The Guillermo Klein 17 piece Big Band took Sunday residency at the hip village jazz club Small's. Later the band secured a running gig at the Jazz Standard. As a composer, Klein was able to attract some of the areas finest young musicians. He possesses a unique sense of rhythm and harmony.His music masks complexity with the modulating groove of an undertow. His subtle shadings skillfully utilize classical, folk and contemporary musical influences. Since 1990 Mr. Klein has been living in his native Argentina as well as in Barcelona, Spain. He makes his way to New York occasionally for short gigs at local venues like the Village Vanguard or the Jazz Standard, where he is able to assemble an awesome array of musicians who are anxious to perform with him.

﻿
﻿
In the case of this latest release “Bienestan”

, Mr. Klein worked in close collaboration with the pianist Aaron Goldberg- both former Berklee students-to create a series of compositions and arrangements that were tailored made to showcase Mr. Goldberg’s considerable pianistic talents. The two enlisted the formidable rhythm section, plucked from the super group James Farm, of Matt Penman on bass and Eric Harland on drums. In case that wasn’t enough fire power saxophonists Miguel Zenon and
Chris Cheek are also featured on several songs.


The short opening cut finds Mr. Goldberg playing an interesting intro before breaking into a straight ahead trio fromat with Penman and Harland on the Jerome Kern standard “ All the Things You Are”. Goldberg's familiarity with the song and its tradition is apparent .
“Implacable”, the first of several Klein compositions on the album, starts with an ostinato on Rhodes piano by Mr. Klein. A playful duel between he and Mr. Goldberg on piano incorporates elements of techno crossing into a classical fugue, all played over Klein's relentlessly modulating rythmic core line.
On Charlie Parker’s “ Moose the Mooche” we are treated to the superb alto of Miguel Zenon who navigates the constantly changing time signatures of the song brilliantly. Goldberg’s piano is equally adept at the quirky bobs and weaves, but it is the amazing duo of Harland and Penman that are the real treat here. The two make the chicane of time changes appear to be an effortless walk through the park. This is a stellar modernized version of the Parker classic that could only be executed by master musicians.
Klein’s pensive “Burrito” is a beautifully conceived tune that seems to float along on the chime-like sounds of Klien’s   Rhodes piano.Goldberg’s sensitive acoustic piano musings evoke a feeling of unfulfilled emotional yearning.
Perhaps the most challenging composition on the album is Klein’s  “Human Feel”.  Klein builds tremendous kinetics with his unique arrangements and clever use of instrumentation. Drummer Harland  compliments the music brilliantly while propelling the piece forward. Chris Cheek and Miguel Zenon intertwine their saxophone parts in a harmonious cacophony of sound that sails on top of Klein’s Rhodes and Penman’s bass. The piece somehow retains an inherrent organic order, despite feeling a bit like an attack of cardiac arrythmia.
“Anita” is another Klein composition that features Zenon and Cheek playing in beautiful harmony.Klein seems content to settle into mostly chordal work on his Rhodes leaving the more intricate piano solo work to Goldberg, who is a wellspring of ideas.
Another Charlie Parker tune “Blues for Alice”, features a wonderful lead-in bass solo by Matt Penman. Goldberg’s piano searchingly climbs up the keyboard as Harland creates unerring interest with his bag full of percussive techniques. Miguel Zenon’s alto solo is a high light of the album; wonderfully buoyant, tonally clean and truly Parkersque in its fluidity.
Klein offers two version of the standard “Manha de Carnaval”. The first features some beautifully sensitive and poignant piano by Goldberg, as well as a moving bass solo by Penman. The second version is a considerably more upbeat one with Harland and Penman offering a more rhythmic bossa beat that provides Goldberg the chance get into a groove and to play more aggressively. Harland is given a chance to demonstrate why he is one of the premier drummers on the scene today as he finds a myriad of sounds just using his sticks.
“Airport Fugue” is another Klein original, this one a duet with Goldberg on piano. Klein's playing has a hypnotic floating quality.
Klein’s “Yellow Roses” is airy, romantic ballad. Penman’s plucky, warm toned bass leads into a gorgeous Goldberg piano solo that follows the oscillating line of the melody. Chris Cheek’s silky soprano saxophone has the lightness of a butterfly in flight. One can almost hear the influence of the group Oregon in this piece with Cheek 's soprano evoking the etheraeal sound of Paul McCandless here.
“Impressions De Bienestan” starts out with the combined sounds of Goldberg’s piano and Penman’s bass creating a cinematic feel. Klein skillfully employs the sounds of his band's instruments, combining his Rhodes piano with Penman’s yearning bass lines to create suspense and intrigue. Harland adds deft accents to the mix. The group creates an aural picture of a rather eerie place, Beinestan,that could easily be a town in a Rod Serling vinette.


The finale is a completely different and hauntingly interesting take on the opening tune titled “Amtrak/ All the Things You Saw”.  This unusual version of the well-worn classic  is a little gem. Harland creates tick-tock metronomic time of a waiting train. Goldberg ultimately plays the memorable melody line as a solo. He pars it down to its bare essentials. Klein's arrangement somehow lingers in a way that manages to convince you that while this is familiar territory you have never really been here before.
This group will be playing Wednesday through Sunday August 17th through 21st at the Jazz Standard in NYC , so go out and support great "live" music.