Donny McCaslin at the Firehouse 12


The Firehouse 12 is a beautifully converted old firehouse on Crown Street  in downtown New Haven, CT. The converted space now includes a chic lower level bar, a state of the art recording studio and an intimate performing space. Every season, the venue produces a series of Friday night concerts that feature some of today’s most interesting and creative performers in jazz.  Some acts that were featured this year included Ingrid Laubrock, Kris Davis and Tyshawn Sorey’ s Paradoxical Frog,  E.J. Strickland’s Quintet, Dan Tepfler’s Trio and the more mainstream Fred Hersch Trio. The “Live Room,” a 1200 square foot space that seats approximately seventy-five lucky patrons, is where all performances are featured.  It is the intimate nature of this venue that makes it especially rewarding for both the artists and their fans.

On this past Friday evening the Firehouse featured the firebrand saxophonist Donny McCaslin and some old friends playing the music of his latest cd  Casting for Gravity. I recently reviewed this challenging album which finds McCaslin pushing further into the blurred lines between jazz and electronica. You can read my Huffington Post  review here.

The group started out with the title track from his new album “Casting for Gravity" a slow brewing song that starts with McCaslin and Hays slowly ruminating on a vamp that then erupts into a more urgent, repeating refrain from McCaslin that is accentuated by some strong syncopated pounding by Danzinger. The refrain eventually ends in just under four minutes, segueing into the powerful “Stadium Jazz.”  At its’ core, this tune is built on a melodic ascending and descending scale played by McCaslin and Hays, which yields to a raucous break-a broken, staccato driven vamp played in unison by soaring tenor, echoing Rhodes keyboard, throbbing electric bass and bombastic drums all executed with surgical-like precision. While the energy level of the group was laudable the unchecked volume of Mr. Danziger’s drums was unsettling.

On McCaslin’s “Losing Track of Daylight” the artful Kevin Hays straddled himself between the grand piano and the Fender Rhodes. Hays single handed runs on the came through as muddled to my ears and I was in the second row. The nuances of his solos almost rendered undecipherable, blotted out as the drums overpowered the space. Where on the album Guilliana’s drums are powerful, syncopated partner in the music with well placed rhythmic breaks, Danzinger’s pulse was bombastic, overpowering and awkwardly at times out of sync with the flow. McCaslin, who is a powerful player, seemed oblivious to Danziger’s volume and compensated with his own strength. All subtlty that may have been observable in Hays or Fima’s work was obliterated by Danzinger’s over the top playing. 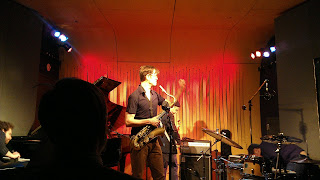 There is no doubt McCaslin’s music requires a strong rhythmic foundation, but it is incumbent upon a drummer to know the room and play accordingly. The audience for the most part seemed impressed by Mr. Danzinger’s energetic playing. He is a powerful, propulsive drummer who has serious chops, but to my way of thinking he needs to harness his enthusiasm and inject some subtlety especially in a room as intimate as the Firehouse.

McCaslin has a slender, reed-like frame with an innocent, almost schoolboy look, a deceptive appearance that hides the fire that resides within this man. This fire erupted on his next composition “Tension,” a song he composed with his two year old Henry in mind. McCaslin’s music, while taken from life,  has become less lyrical in his most recent offerings and this composition is a case in point. Starting out as a series of repeating honks that rise and fall to a changing beat, the song is a pure exercise in manic, frenzy that leaves you in a state of agitation. McCaslin’s taught face was the picture of tension as he played this song. While it may perfectly represent his state of mind when his two year old is testing him, it did little for me but to make me twitch.

The final song of the first show was titled “Memphis Redux” and was a from a previous McCaslin album titled Perpetual Motion. The slow burning, funk imbued song was a homage of sorts to influences like Joe Zawinul’s  “Mercy, Mercy Mercy “. McCaslin’s horn took on a distinctive Maceo Parker rasp to it as he dug deep into the soul of the tune. It was nice to hear McCaslin play more recognizably melodic music. Kevin Hays added a  particularly bluesy touch to the keyboard and with Danziger in the pocket on this tune, Hays offered his most creative solo of the night. McCaslin ended the song with a sustained solo exploration that was both lyrical and moving and brought the audience to its feet.

I applaud McCaslin for stretching his boundaries and venturing into more challenging modes of music. He is a fine player who plays with intensity and passion, but perhaps he is sacrificing some of his musicality. I was recently at a Jazz Standard show where I was seated next to two saxophonists who had come to  see Scott' Robinson's latest creative work, Bronze Nemisis. One of the players, who recently saw Donny at a Vanguard show, read my review of Casting for Gravity and later wrote to me in disappointment. that at the Vanguard show he just wanted to yell out “Sing us a song, Donny!”   I remain a fan, but  I too long for McCaslin to show us his more lyrical side more often.