On a Thursday night at the elegant Kitano Jazz club in Manhattan the saxophonist Michael Blake premiered his latest work Contrasts in Individualism,”  a series of compositions inspired by two of the twentieth century’s most influential pre-bop tenor men, Coleman Hawkins and Lester Young.

Mr. Blake, a Canadian born in Montreal and raised in Vancouver, Canada, has made New York his home since 1986. The mild- mannered musician has been playing with some of the most progressive musicians on the scene as a member of John Lurie’s Lounge Lizards, Ben Allison’s Medicine Wheel, The Herbie Nichols Project, Steven Bernstein’s  Millennial Territory Orchestra, and the progressive instrumental  group Slow Poke with Dave Tronzo, Tony Scherr and Kenny Wollesen, along with several self-led groups.

In a world littered with saxophonists who prefer to play a fusillade of notes to express their ideas, Michael Blake has refreshingly chosen to follow a more measured approach.  As a student of the pre-bop masters Coleman Hawkins and Lester Young and predecessors in their lineage, Mr. Blake has a developed a style that incorporates many of the techniques that made them so unique, combining them with his own signature sound that has been strongly influenced by soul, funk, rhythm and blues and rock. The result is a unique voice on the instrument that plays with conviction that is refreshingly free from pyrotechnics or affectation.  An accomplished technician, Mr. Blake is comfortable playing at those difficult slow tempos that often can require holding a note with pristine intonation or uttering a gut bucket growl to make a point. That’s not to say the man can’t swing or dazzle, his tenor can flow like a spring-fed mountain stream occasionally bursting into fast paced waves of swirling eddy currents. Having been touted as an up and coming voice on tenor saxophone for quite a while it’s time to acknowledge that Michael Blake is one of the leading proponents of the instrument today. He debuted this music with his all-star band  World Time Zone which features Ben Allison on bass, Frank Kimbrough on piano and Rudy Royston on drums. 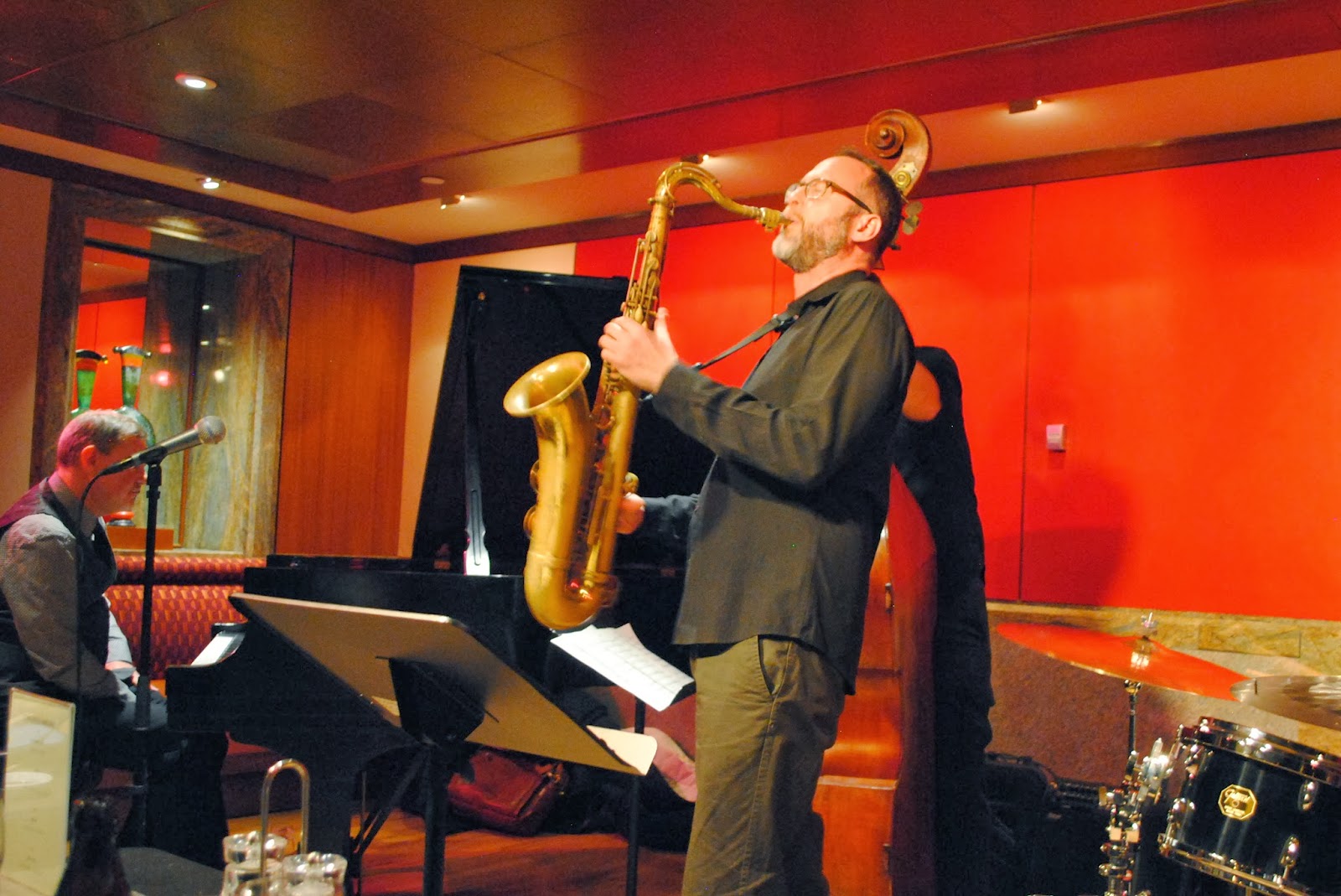 Mr. Blake’s compositional skills were on display with Contrast in Individualism, a commission made possible by a grant from the Doris Duke Charitable Trust. Comparing and contrasting two iconic players like Coleman Hawkins and Lester Young could be a daunting task for any saxophonist.  Mr. Blake’s told the audience that his own approach was to share what he loved about their music through his own contemporary lens.

The set started out with a song titled “Skinny Dip” a slow, strip club like shuffle that featured some pointillist bass lines by Ben Allison and some raspy Hawk-inspired playing by Blake. His escalating tenor solo built in measured crescendos with tasty licks that had a very sensuous side to them.  Mr. Kimbrough took a solo spot that was contrastingly more jagged but steeped in the blues. Mr. Allison and Mr. Royston kept the rhythm going in the spirit of the song.

Mr. Blake related the story behind the title of his next composition “Some Tiddy Boom Please” a reference to something Lester Young said to a drummer wanting him to kick it (the beat) a little. Mr. Blake starts out with an unaccompanied  saxophone solo that  is both expressive-he hums into his reed creating harmonic distortions- and rhythmically flowing as his horn pours out a funky groove, a pattern of notes that remind me a little of Eddie Harris’ work.  The band picks up the vamp as Blake continues, occasionally using some Hawkish rasp to his tenor. Some nice playing by pianist Kimbrough takes the whole thing into a loose swing mode.  Drummer Royston and bassist Allison have great chemistry and they carry the rhythm with a joyous bounce that is infectious. Blake ends the piece with a rousing solo that has elements of Young, Getz and a playful Blake in it to the delight of the crowd.

Mr. Blake introduced the next composition as a mini-suite titled “Letters in Disguise.” The slow ruminating opening featured some facile bass work by Ben Allison who plays with child-like excitement. Mr. Royston conjures up percussive sounds that somehow fit perfectly as Mr. Blake plays in a slow, sensuous tone that darkly aches with pathos and expression. Mr. Kimbrough then opens the second part of the suite with a quickened pace that bursts us into the daylight. The pianist is an accomplished player who had moments of inspiration during his solo that brought a smile to the faces of his fellow musicians as well as an appreciative audience. Mr. Kimbrough took the song to a new height of excitement that then allowed equally inspired playing by Mr. Blake. Blake’s soloing produced a series of measures that were inventive and at times derivative of the style of the masters he was acknowledging. The song ended as it began with Mr. Blake holding the final softly blown notes from the lowest register of his horn in a guttural hum that faded to a hushed whisper.

The next song was a straight blues in the style of Lester Young titled “Good Day for Pres.” Mr. Blake can certainly play with the beautiful lyricism of the “Pres.” when he wants to. He has a command of tone and attack that is quite impressive and like Lester he knows the value of space.  Mr. Allison, who besides being a talented composer in his own right, is a helluva bass player,  played an impressive extended bass solo, incorporating slides, bends and leaps, as Royston played gingerly on hi-hat and rim accompaniment. Not to be outdone Mr. Kimbrough provided his own impressive Monkish solo that had a way of making this simple blues into a far from simple song. The song ended in a slow, deliberate musical drawl that showed just how in tune these musicians are despite having little practice with the material.

The Coleman Hawkins inspired  “Hawk’s Rhumba " was the next composition. Mr. Blake nailed the Hawk’s tawny, luxurious sound on his tenor. The phrasing was impeccable and the warm, liquid tone was a treat to behold. Mr. Royston, never content to merely hold a beat, colored the song with flourishes of old time chick-a-boom style snares and shimmering cymbals. As Michael said to the audience at the conclusion of this one “If that didn’t get you in the mood I don’t know what would.”

The final composition of the set titled “The Ambassadors” had a slightly Caribbean beat mildly reminiscent of Sonny Rollins’ “St. Thomas.” Over the cadenced trap work of Royston, Mr. Blake played his free flowing tenor, interjecting s unique humming into his reed that created some interesting harmonic overtones. This was perhaps the most modern and contemporary music of the evening. Mr. Kimbrough played with sensitive accompaniment as Mr. Blake wailed. The band stopped in mid-stream allowing Mr. Blake center stage to develop ideas on his solo horn which again included his harmonic overtone work.  The band then, led by Mr. Kimbrough, went into a more funky groove that was steeped in R & B and had the audience bobbing their heads to the beat. Mr. Blake’s compositions and the nature of his band mates is such that the music is not rigid and it seems to develop organically as ideas percolate between these musicians, who have a rare rapport. It is as much a product of the written chart as it is of the ether from which these artists pull ideas and build upon them in sympathetic union.


For that reason Michael Blake’s World Time Zone is one of those bands that is best savored live. Catch them perform Mr. Blake's Contrasts in Individualism if you can.

While not this particular music, here is a sample of Michael Blake's work: