Natalie Cressman's Turn The Sea: Is this the course of Indie-Jazz? 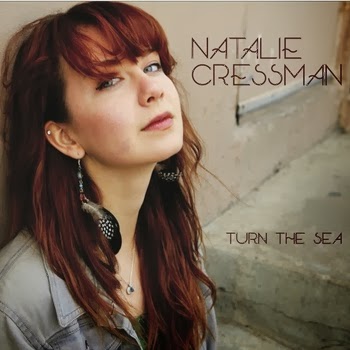 It is becoming an increasing cliché to talk about music being genre-crossing as it seems almost every week I come across music that defies categorization.  After reading many interviews by some of the most accomplished practitioners of contemporary , improvisational based music, often lumped together in a category labeled “ jazz" ( link to  my review here of Radhika Philip’s book of interviews titled Being Here), it becomes apparent that most musicians shun having their music pigeon-holed by  labels at all.

Along comes Turn The Sea, a new album from the twenty-two year old trombonist Natalie Cressman, who also happens to sing and compose,  and you realize how labels become a waste of time. Ms. Cressman comes from a musical family- a jazz vocalist mother and a trombone playing father-so it was a natural progression for the young woman to explore her own musical career. Her father was a one-time member of the band Santana as well as a touring member of the jamb band Phish. Admittedly, Ms. Cressman had a distinct advantage when her father decided to quite touring with Phish and suggested his daughter to replace him in the brass section. She was just eighteen at the time. Getting a once in a lifetime opportunity is one thing but making it on tour as a professional musician and completing an education at Manhattan School of Music is a feat few could handle at such a young age. She certainly seems to have managed nicely.

Turn the Sea incorporates many diverse elements including Ms. Cressman’s trombone, her compositional tendency toward storytelling  and her beguiling voice. Ms. Cressman’s voice has an indie-folk, softly spoken sound- a modern version of Jacqui McShee comes to mind- and she harmonizes with herself nicely through overdubs, especially on Bon Iver’s “Blindsided,”  one of only two tunes on the album that are not her own compositions.

The  music is expertly played by her band Jonathan Stein on acoustic and electric bass, Gabe Schnider on guitar, Samora Pinderhughes on keyboards, Ivan Rosenberg on trumpet, Steven Lugerner on flute, clarinet and bass clarinet , James Casey on tenor saxophone, Michael Mitchell on drums and of course Ms. Cressman on voice and trombone.

The music is well conceived exploring multiple rhythmic patterns, adept arrangements and vocals that linger hauntingly in their purposeful unpretentious beauty. The result is a surprisingly fresh approach that incorporates some of the best elements of jazz and indie music and defies categorization.

As a brass player herself, Ms. Cressman is well aware of the impact a good brass and reed section can lend to a song when incorporated into the mix effectively. To her credit she uses the various voices in her ensemble to great effect especially  on the opening of the title tune “Turn the Sea.”   The synchronous front line playing of reed and brass lend the song a jazz sensibility and cues the listener to be on the lookout for creative arrangements.

"Fortune’s Fool” is propelled by an interesting rhythmic pattern developed nicely by Stein’s serpentine bass lines, Mitchell’s syncopated percussive drive and the ethereal keyboard work of Pinderhughes.  This song utilizes echoed guitar chords and a dancing flute to give it a light atmospheric sound accentuated by the airy Celleste sounding Rhodes work by Pinderhughes and Cressman’s deft vocalizations.

Cressman’s successful reworking of the Bon Iver song “Blindsided” is the most Indie sounding of the songs on the album. Cressman utilizes overdubs of her own mid-ranged voice juxtaposed against some tasty bass clarinet work by Steven Lugerner to great effect in the chorus. This opens to a poignantly played trombone solo that is surrounded by dancing reeds. Jonathan Stein’s acoustic bass anchors the song with a large firm tone throughout.

“New Moon” is a mixture of modal groove, Ms. Cressman’s storytelling accentuated by flute and reed orchestration and  West African inspired chants and rhythms. One might suspect the mixture could tend toward the schizophrenic, but Ms. Cressman manages to make the seemingly disparate elements work quite well together. At times on this song, when she harmonizes with her own voice, she sounds strongly reminiscent of the Polish singer Basia Trzetrzelewska, but the music is a prime example of a blurring of genres.

On Hanne Hukkeberg’s “Do Not As I Do,” perhaps the most melodic of the songs on the cd, the cautionary lyrics are recited by Cressman who talks of past mistakes without judgment and no regrets. Her voice is light and confident as she sings the chorus with an innocent beauty.

“Checkout Time,” uses multiple overdubs of Cressman’s voice to create an eerie repeating rhythmic pattern over which she sings the main lines accompanied only by Rhodes. A deeply echoed voice is electronically enhanced as she sings accompanied by Gabe Schnider’s sparse guitar. The song has a an electronically enhanced minstrel-like quality to it, but doesn’t seem to be fully realized.

“Winter Chill” is Ms. Cressman’s most pop oriented of the songs on this album. The lyrical content of the song is predictably about a lost love and the orchestration is the least daring of her compositions,  the chorus being the most memorable part.

On “Stolen Away” Ms. Cressman returns to the rhythmic influence of West Africa. Mr. Schnider keeps the beat with his syncopated rhythm guitar as Ms. Cressman gives us a taste of her musical muscle on a rousing trombone solo.  The band creates an irresistibly danceable groove that is only reinforced by Ms. Cressman’s repeated catchy vocal refrain of “Stolen Away.” This one could be prime for repeat radio play.

The finale is an electronically produced version of the title tune “Turn The Sea,” a remix version produced by the band’s bassist Jonathan  Stein. Ms Cressman’s trombone solo is drenched in electronic sounds and synthesized sounds have been incorporated throughout. The production sounds a bit too busy for me and I prefer the original version.

Though a bit uneven Turn The Sea is for the most part an enjoyable offering and deserves a serious listen.  It just goes to prove that improvisational music can successfully take off in any number of directions and it’s up to us to be open enough to consider the possibilities.