Scott Robinson and Julian Thayer Explore the Sounds of the mind on "?" ( huh!) 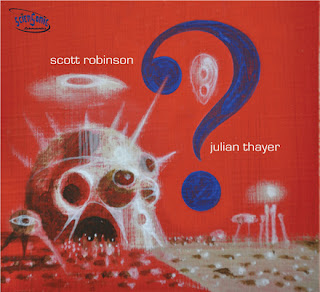 Multi-instrumentalist Scott Robinson is perhaps one of the best kept secrets on the jazz scene in NYC today. Despite his prolific work- he has been recorded on over two hundred recordings since  1981- he is relatively unknown to the general public for the superstar musician that he most certainly is.
He is an avid collector of some of music’s most unusual instruments and has mastered many of them. Appreciated by his peers as a musician’s musician for his phenomenal reed work,  he  has enlivened the palette of such varied groups as The Maria Schneider Orchestra and the Village Vanguard Orchestra, as well as The Ron Horton/Tim Horner Tentet or his own Scott Robinson Doctette.  Mr. Robinson is also the founder of his own record label ScienSonicLaboratories where he wants to explore the depths of the rare and unusual instruments that he owns and plays. He is, to coin a word, a Musicientist, who is fascinated by the frequency and modulations of sound. His more adventurous work is like a step into another world where mystery and adventure are more important than melody or rhythm.

We once had a discussion on what made music accessible to the general listening audience. It was Mr. Robinson’s position that all music, no matter how atonal, un-rhythmic or  for that matter unmelodic, was accessible to all those who spent the time and effort to access it on its own merits.

Mr. Robinson’s forays can reach into a universe of sounds that for some can be disconcerting and for others fall outside any classical definition of music, but no one can deny they are interesting.
Julian Thayer was a roommate of Mr. Robinson when they both attended Berklee College of Music back in 1977. Mr. Thayer is an accomplished bassist and has collaborated with Mr. Robinson on a previous album titled Nucleus from 2010.  Mr. Thayer continued his education after Berklee earning a PhD in Psychophysiology.  He is the Eminent Scholar Professor of Health Psychology at Ohio State University. There is no doubt that these two gentlemen have more than just music on their minds. They seem intent on exploring the boundaries of sound as they relate to human emotions and sensory perception.

On “?” which seems to have the unspoken tagline of “huh?” featured as track number seven on the cd, Mr. Robinson and Mr. Thayer seem to be playing freely with no specific written  music just a symbiotic love of the unknown, the absurd and the bizarre. The titles are equally telling; "expanse," "veil,""unearthly vision,"" misterioso"- the only semi identifiable nod to a well known song by Monk-"molecular inquiry," "search the skies,"" rare imaginings," "I wonder," "sub-molecular inquiry," "enigmatic entity," "outer-sonic oracle" to name a few of the twenty-nine distinct pieces .
You  can hear the ominous voices bellow from Mr. Thayer’s bowed bass or cry from Mr. Robinson’s  mournful  C Melody Saxophone. The alien sounds of Mr. Robinson’s Theremin also prevail on the opening track “expanse.” Or simply a bent bass line on “JT poses a question.” The Hammond Organ Pedals juxtaposed against the bow-legged bass sounds on ‘dark mystery.’ Need something to sound grating? Try the junk banjo of “quick question.” More melancholy is elicited from Mr. Robinson’s woody alto clarinet on “three investigations.”  The static sound of an old radio and the eerie sine wave emissions of the Theremin are captured on the aptly titled “un-earthly vision.” The absurdly low walking contrabass sarrusophone counterpointed against Mr. Thayer’s percussion and string bass.

The list goes on and on, some of these instruments I confess to having never heard of before, including sounds from Mr. Robison’s arsenal : the Hammond Organ, clarinet, tenor saxophone, bass marimba, clavioline, trautonium, bass flute, echo cornet, slide saxophone, tuned cowbells and Korean gong.

I am truly at a loss for words to describe what Mr. Robinson and Mr. Thayer have done here except to liken the album to a soundtrack of a Sci-Fi movie from the fifties and to say it is certainly adventurous. As Scott labels on his album this is a "Certified Space Imagination" product. Hearing the unbridled laughter at the end of track 17 “what in the world,”  one can only assume these gentlemen had a lot of fun making this album.

Here is video of these two mad musicians in action: