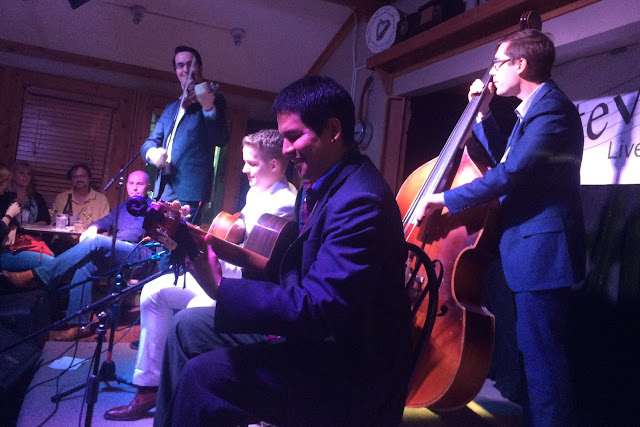 This past Sunday evening I made my way to yet another greater Atlanta music venue. This time it was Steve’s Live Music in Sandy Springs, GA. Where owner and music impresario Steve Grossman has been offering an eclectic blend of live music and a vegetarian menu to those in the know for the last four years. Unfortunately, Steve told me the venue will be closing in the next several weeks due to the ever rising costs of renting the space. Too bad, it’s a comfortable laid back showcase for live music and it will be sorely missed.  This particular evening the future of gypsy jazz came to entertain a full house of avid fans at Steve’s in the form of the Rhythm Future Quartet.

The Rhythm Future Quartet is a Boston based group of four young, abundantly talented musicians who have taken up the mantle from giants of the genre like Django Reinhardt and Stephane Grappelli and their famous “Hot Club of Paris” music. These young upstarts- the oldest is reportedly 32- have rocketed the music into the future by incorporating multiple influences from gypsy jazz to Balkan folk, Spanish Flamenco to Country swing, teaming it with their own virtuosity and playing it all with a joyful abandon that is downright infectious.

The quartet is made up of Jason Anick on violin, Olli Soikkeli on lead guitar, Max O’Rourke on rhythm guitar and Greg Loughman on acoustic bass.  On this evening O’Rourke was on another gig and the able Ivan Pena took the rhythm guitar chair. Together these guys make music that range from jump in your seat bounce to shedding a tear in your beer poignant.
On this particular night we had the fortune of attending the second of two sold out shows. The fortune comes because in order to play this kind of music at the rapid fire pace these guys do it’s always nice to have a warm up se. Warm they were as they burst into the music with an original composition by bassist Greg Loughman titled “Iberian Sunrise.”  The magical interchange between Anick’s fetching violin and Soikkeli’s fleet fingered guitar was a treat to behold.

On the classic Jimmy Rosenberg title “Made for Wesley,” Anick’s moving virtuosity was on display as he made his violin sing creating a fusillade of notes that he bowed with amazing facility, alternating between rapid fire bursts and poignantly sustained bows. When it was Soikkeli’ turn to solo, the Finnish wunderkind gave a similarly stunning display of facility, machine-gunning a flurry of notes that were amazingly clean and equally inventive. There is both comradery and brotherly competition between Anick and Soikkeli as they push each other to more and more challenging excursions of improvisational daring, like two gunslingers waiting to test who has the fastest draw. All the while the Pena and Loughman kept impeccable time at ever increasingly challenging speeds.
The next tune was composed by guitarist Soikkeli for one of his mentors, guitarist Paulus Schafer, titled “For Paulus.”  At the opening, this slow sauntering gypsy jazz treat had the crowd bouncing to the infectiously strummed rhythm that is until it broke into a double time with Anick propelling the tune in his best imitation of the great Stephane Grappelli whom obviously has been a great influenced.

The more traditional fare was temporarily suspended as Anick spoke of being a Beatles fan and reworking one of their tunes. Loughman introduced the famous lead in bass line to the Beatles “Come Together” as the group gave the classic pop song their own twist. The song had me remembering such violin centric rock groups of the as Fairport Convention, The Flock and ELO.  Soikkeli did a burning acoustic solo on guitar that had it been on distorted electric would have been a ripper.

Anick’s exotic sounding “Vessala” is a Balkan folk music inspired tune evoking a scene with a traditional lace garbed folk dancer spinning to the music’s sinewy twists and turns. When Anick and Loughman both bowed their instruments the sound took on a distinctively chamber music feel.
On the beautiful “Soul ce Soir,” Soikkeli demonstrated a challenging technique of muting the strings with his forefinger as he picked them with his thumb producing a muted sound that was quite unique. Pena’s unerring strumming and Loughman’s bass kept the loping rhythm in perfect play. Anick’s melancholic Grappelli-like sound spanned the spectrum between sweet and sorrowful.

The group did a unique take on the Gershwin standard “Summertime” using the lead-in to Michael Jackson’s “Billie Jean” to start and end the song. The clever pairing added a little suspense and humor to the classic standard that they used as blues-based improvisational vehicle. The audience loved it.
The group continued with several other songs including one that had Anick playing raw fiddle like it could be part of a country hoe down. The old standard “The Best Things in Life Are Free” was played in a way that could have easily conjured up memories of the great Joe Venuti in style.

The crowd at Steve’s came to hear the next generation of gypsy jazz and they were not disappointed. The audience gave the band a standing ovation and the band returned for one encore performance of guitarist Olli Soikkeli’s composition “Bushwick Stomp,” the first song he wrote when he came to America from his native Finland. The tune is a barn burner and has recently reached more than one million views on You Tube, fascinating viewers with its fluid swing, the technical facility and the finely honed synchronicity that these young artists display
.
The Rhythm Future Quartet is now on tour promoting their new album Travels which highlights their hectic schedule. According to a post on bassist Greg Loughman’s Facebook page the group performed in twenty-one states last year and if their popularity is any indication they should easily break that mark this year. One thing for sure if you have a chance to check out these Gypsy Jazz bandits don’t pass it up. 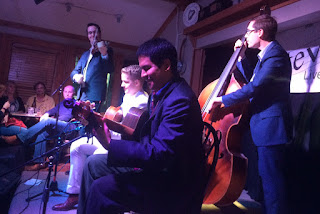