Kate McGarry and Tierney Sutton Bring the Art of Song to The Velvet Note in Alpharetta, GA

Two women of song brought their own unique styles to the intimate living room that is known as The Velvet Note in Alpharetta, Georgia this past Saturday. Kate McGarry and Tierney Sutton are both Grammy nominated vocalists that fall loosely under the banner of jazz singers. Whatever it is they sing you can be assured you want to listen. 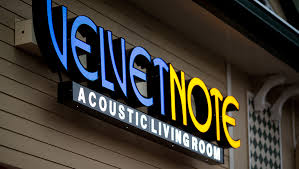 Ms. Sutton is a chanteuse whose modern interpretations of songbook classics veer towards the styles of Peggy Lee, Julie London and a touch of Helen Merrill. Ms. McGarry brings her own more eclectic repertoire, possessing an earnest, plaintive sound that reminds you more of Joni Mitchell with the vocal excursions of a tempered Betty Carter. The two women were joined by their respective significant others/guitarists. Keith Ganz with Ms. McGarry and Serge Merlaud with Ms. Sutton.

This was the last performance of a two-night run at The Velvet Note and unfortunately Ms. Sutton was fighting a minor bout of laryngitis, which limited her ability to reach some notes. Despite the handicap, Ms. Sutton valiantly braved on to the delight of the expectant crowd. Consequently, it was left to Ms. McGarry to do all the talking from the bandstand. Despite knowing each other for years, the four musicians had never played before their first performance together at the Note the night before. Tamara Fuller, introduced the couples, likening the meeting to two couples on a blind double date. There was a definite impromptu feel to the start of the show with each couple finding their own musical way within the boundaries of each other’s space.

The set opened with the Stept/Brown/Tobias number “Comes Love” which was made famous by Billie Holiday and later sung by Joni Mitchell. Ganz started the intro with Sutton quietly singing/scatting and McGarry responding on alternate lines. As with most solo artists, Sutton seemed
more accustomed to having free reign to explore improvisations on the lyrics according to her own muse. McGarry used some cautious hesitancy when responding with the alternating verse, making sure to leave enough room for Sutton to complete her thoughts. Sutton often draws out notes and phrases toward the end of the verse for emphasis, where as McGarry is more definitive in completing her endings preferring to modulate within the verse. When the women tried to improvise to the coda, their unfamiliarity with each others intentions provided for a bit of a disconnect, each one struggling to find where the other was heading. Like true professionals their interplay got better as the evening went on.

Mr. Ganz strapped on his electric bass for the next song, Cole Porter’s classic “Get Out of Town.” A well travelled piece of music, the great Shirley Horn’s sensuously torrid take from her Close Enough for Love  is for my money "the" definitive version. Mr. Ganz opened with the first verse in upbeat, swinging fashion as Ms. McGarry snapped her fingers in time. Ms. Sutton followed gingerly using her huskier chops to vocalize her way up and down the scale. In hipster fashion Ms. McGarry cleverly inserted a snippet of Monk’s “Round Midnight” as her basis for improvising on the lyrics. The singers went back and forth as the guitarists provided the rhythmic background for this musical duel/duet. You could hear how each singer was starting to intuit where the other was leading them with each passing attempt.

Mr. Ganz returned to the guitar at the start of the Kenny Dorham composition “Fair Weather” offering a beautifully sensitive opening intro before Ms. McGarry continued with a marvelously moving vocal performance. It is this type of heartfelt song that finds the vocalist at her best. Her voice has an earnest quality that captivates the listener, spinning imagery and wonder that recalls the best qualities of a great storyteller.

Ms. Sutton was obviously still suffering with her vocal limitations, jesting with the audience that the show was now being presented with the aid of Chloraseptic. The audience, many of whom had come specifically to hear her, were graciously thankful that she chose to soldier on. She and her partner Mr. Merlaud chose to do a samba, which Mr. Merlaud played with acute sensitivity. Mr. Ganz was also featured on a spirited bass solo. Ms. Sutton seemed most at home when she was free to more easily find her own groove, scatting freely and improvising within the song's breezy form.

The group went back to the well with a Keith Ganz arrangement of the standard “Whatever Lola Wants.” Ms. McGarry amusingly likened a “Lola” to a bad habit that one couldn’t quit. This sensuous song depicting a sultry siren who could get whatever she put her mind to, was done playfully by the two singers. The Sutton/McGarry connection was most intuitive on this one, especially when the two played off each others lines. When Ms. McGarry’s voice mimicked Mr. Ganz’s solo guitar lines perfectly you could tell these two had been through this one many times before. Ms. Sutton interjected humor into the song and where the song challenged her impaired range she skillfully scatted around those parts.

As if  by inspiration, Ms. McGarry spontaneously decided to do an obscure folk song from the singer/songwriter Paul Curreri titled “God Moves on the City.” Mr. Ganz, a facile and versatile guitarist, started the song with its delicately finger-picked opening. Ms. McGarry’s voice was transcendent, evoking an Appalachian flavor and pulling the homespun lines from the deepest part of her being like water from a well.While she often traverses the boundaries of jazz, pop, musical theater and folk I find Ms. McGarry’s voice and delivery to be most authentically appealing when she finds material like this that seems to resonate with her folk-oriented roots. It was her moving rendering of Jim Webb’s “The Moon Is a Mean Mistress” from John Hollenbeck’s fabulous Song’s I Like a Lot, sung with Theo Bleckman and the HR Big Band that garnered a Grammy nomination.

The four musicians returned to the American songbook with a duet version of the 1936 song “Pennies from Heaven.”  Ms. Sutton started the easy swinger with a deft combination of verse and scat. Ms. McGarry joined with her own alternating scat. The two traded licks for a couple of choruses and the guitarists then each took their turns at soloing.

“Flor De Lis,” by the Brazilian artist Djavan, is a slow samba that as Ms. McGarry explained, despite being rhythmically upbeat, spoke of a frustrated suitor and his plight with an intractably cold lover. She sang in both flawless Portuguese and English and again the inherent musical connection between her and Mr. Ganz was palpable. Mr. Merlaud providing a wonderfully fluid solo of his own, as Ms. Sutton added some skillful scatting and percussive effects at the coda.

The finale was a dual interpretation of Bill Evans’ “Blue in Green.” Both Sutton and McGarry have previously recorded this song, so it was interesting to compare the two takes on the same music. Ms. Sutton’s version used lyrics that evoked loss and jealousy. Her whispered voice appropriately evoked the song’s meandering melancholic feel. Ms. McGarry version focused on the circular nature of the song and used the lyrics she wrote, a song she called “Road So Long,” taking the song in a more hopeful direction. Both versions sent the audience to their feet.

While it was a disappointment not to be able to experience Ms. Sutton at her best, the evening was a complete delight. Mr. Ganz and Mr. Merlaud were both extremely effective accompanist’s. Ms. Sutton is a consummate professional whose body of work speaks for itself. It is also easy to see why Ms. McGarry was recently awarded Downbeat’s rising star award.