This past Sunday evening, July 31, 2016, the nearly twenty-year run of Atlanta’s longest continuously operating jazz club, Churchill Grounds, came to a glorious but ultimately sobering end. Since April of 1997, when the club first opened its doors, Churchill Grounds has been a labor of love. The name is curiously the combination of two things that Owner Sam Yi loves, Churchill size cigars and coffee grounds. This Atlanta institution was situated adjacent to the Fox Theater at 660 Peachtree NE in downtown Atlanta. Mr. Yi’s admittedly naïve motivation for such an endeavor? Maybe it would be fun to have a place where local musicians could play and you could make a little money providing a platform for the music that you love. Simple and admirable enough, but hardly the kind of business plan that would inspire a flock of financial supporters to your cause. That didn’t seem to bother Yi, a mild mannered business man, who was surprisingly passionate about the music and who decided to live his life immersed in it. On Sunday night, in an emotional farewell, he recounted how this endeavor required that he spend much of his life over the last twenty years at the club, putting in countless hours there, often at the expense of his family. Poignantly looking back over the years it was obvious that given the chance, Yi wouldn’t have changed a thing. 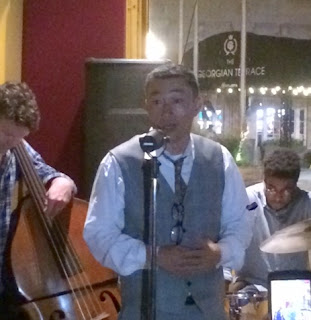 It was his employees who worked there, the musicians who played there and the patrons who respectfully listened there that collectively became his extended family. He thanked them all with an emotion laden goodbye.That family even included two homeless men that became permanent fixtures outside the club’s front door. One of them, “homeless Joe,” offered his own tearful adage from the stage, saying how much he was going to miss seeing Sam and the steady ebb and flow of the club’s patrons. I suspect what Joe will miss most was his visibility. Sam and many patrons didn’t look past Joe, but acknowledged his humanity. They didn’t judge him, but looked at him as a soul who was just down on his luck. They didn’t castigate him as a nuisance, but greeted him with dignity, including him as part of the extended Churchill Grounds family. It was Sam Yi who provided this space where people who recognized the power and inclusiveness of the music were able to congregate and commune with one another.

And of course there was the music; it swung, it bopped hard or it grooved straight ahead, it fused wildly or it whispered softly and it often funked you to the bottom of your soul. The music wasn’t merely entertainment, it was history, it was creativity, it was a social compact and inclusiveness. Churchill Grounds became the go-to place in Atlanta. The place where musicians of all levels, professional and acolyte, could come and practice their skills, hone their craft, commune with each other and connect with their audience. It was the hometown stage for legends like the late Cedar Walton and the venerable Freddie Cole. It was the sometime residency for current standouts like Russell Gunn and Joe Gransden. It was a stop off joint for visiting celebrities like Wynton Marsalis or Harry Connick Jr. It was the proving grounds for a new breed of firebrand like Morgan Guerin, Kenny Banks Jr., the Harper Brothers and Darren English.

The life of a musician is hard enough in today’s society where the arts in general are valued so poorly. Professional musicians often have to supplement their income by teaching, travelling extensively or taking other work. Churchill Grounds provided that home based waystation for many of Atlanta’s finest jazz musicians. Jazz musicians in particular have chosen a road that becomes ever more challenging in this modern world. Despite jazz being the only recognized original all American art form, the audience for this music has shrunken and grayed dramatically. According to a survey by Nielsens, jazz and classical music sales combined represented just 1.4% of the total music consumed in the United States in 2014. As for digital sales, the likely future of all music distribution- jazz streaming- represented a paltry .3% of the total volume of streamed music. These are sobering statistics for anyone who loves this music, for professional musicians and certainly for the hundreds of music students who are currently enrolled in jazz music educational programs. Needless to say, with such a small audience, the economic viability of presenting this music in a place like Churchill Grounds poses its own challenges.

But what statistics don’t reveal is the fierce loyalty, love and dedication that this music brings to those who embrace it. The spirit, reverence and sense of comradery that is often found within the jazz community as a whole is largely under appreciated by the general public. Jazz is international in its scope. The music remains an international language that bridges the widening gap between peoples of vastly different cultures. Jazz becomes the crucible by which these cultural differences can be annealed into a commonly shared means of communicating with each other in a positive and humanistic way.

The music is often spoken of as music for musicians. That assessment may be partially correct, as it takes a great deal of skill and dedication to play complex improvised music, but it also takes soul, heart and empathy to play it in such a way as it will move the listener.

In this technological age of diminishing attentions, we are less and less likely to immerse ourselves in the musical experience, perhaps because we no longer feel we have the time for such an indulgence. Jazz requires thoughtful listening. The experience is not always best conveyed through listening to recordings- although admittedly the great ones transcend the medium-but when we really listen and participate in the music in a “live” setting the magic of music can spread all over us like a blanket of warm sunshine. An engaged audience becomes an active participant in the creative process. Are we really ready to forego that precious experience?

Having a venue that can offer musicians and music lovers a chance to experience what it is like to participate in a live jazz performance is crucial to very existence of the art form. That’s why the closing of Churchill Grounds is so distressing. 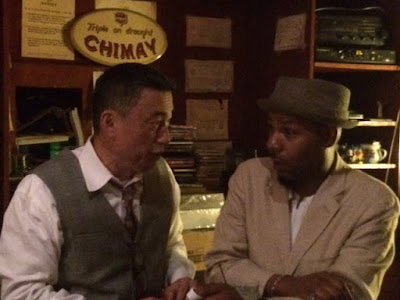 If anyone needed proof positive of the outpouring of love and affection that this music can generate, they should have been at the final few performances at Churchill Grounds. Local musicians and stalwart patrons came in force and solidarity to pay homage to the closing of an Atlanta institution. The City of Atlanta issued a proclamation naming the day Churchill Grounds Day and so did Fulton County, perhaps too little too late. 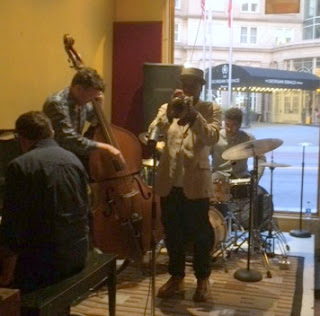 Local trumpet legend Russell Gunn was the informal musical director of the proceedings when I attended on Sunday night. He was joined by the pianist Kevin Bales, the bassist Billy Thornton and the drummer Morgan Guerin. They played with a palpable intensity in a mostly hard bop style to an appreciate crowd of aficionados and well-wishers. Probably one of the most moving performances of the night was a rendition of the Bill Evan’s classic “Blue in Green.” Mr. Bales sensitive opening led to Mr. Gunn’s poignantly playing the melody on his muted trumpet that evoked memories of Miles Davis, an obvious influence. The young rhythm section was equally impressive.

The players frequently changed throughout the night as each one who came wanted to pay tribute in their own most personal way. At one point the stage was packed with four well known trumpet players-Russell Gunn, Georgia State educator Dr. Gordon Vernick, Joe Gransden and Darren English-in a trumpet show down that was par excellence. The trio section of Bales, Thornton, now with Marlon Patton on drums kept the frantic pace as the four guns had a high powered shoot out.

Here is a partial video of that show down posted on Darren English’s Facebook page: click here

Pianist Kenny Banks Jr. took over the piano chair and improvised on a beautiful rendition of “Con Alma.” His thoughtful ruminations on the melody were captivating. Here is a sample of that performance posted by saxophonist James Patterson. click here

Pianist Gary Motley took the piano chair and lent his elegant swing and facile chops to the proceedings. A seasoned professional as well as the Director of Jazz Studies at Emory University, Motley also accompanied several vocalists with a revolving rhythm section, this one including Craig Shaw on bass and Darren English on drums.

Now that the lights are switched off and the doors are shuttered, the best way to describe the proceedings of this last evening at Churchill Grounds is to liken it to a joyous New Orleans style funeral march. A celebration of life not a demonstration of sorrow at the passing. Sam Yi was honored for his years of service, his defense of the cause and his unbridled passion for this music.
Make no mistake, this is a gut check for all of us who live in Atlanta and its surrounds. As a City of six million people can we really afford to lose yet another institution that promotes the arts? Do we really believe that the quality of our lives all comes down to dollars and cents on a ledger sheet?

Mr. Yi has said that he is looking for another venue, a rebirth of Churchill Grounds, hopefully in the near future. We should all hope he succeeds so that Churchill Grounds doesn’t become another distant memory like “Jeff’s Jazz” or “Dante’s Down Under.” Instead of lamenting another lost treasure, let’s all try to make this happen through community activism. You can help by donating to a special go fund me site by clicking here. It seeks to raise seed money to help secure another venue for Mr. Yi and hopefully, with our help. Churchill Grounds closing will be but a temporary blip in its long and illustrious history.
Posted by Ralph A. Miriello at 11:37 AM