This past Monday evening the vocal stylist Virginia Schenck brought the musical poetry of Abbey Lincoln to life at one of Atlanta’s newest venues, The City Winery. This was my first time at The City Winery and it was a pleasant, sophisticated experience . Patrons sit in communal tables that face the generous stage and the venue serves food and libations. The space is on the lower level of a shopping center adhjacent to the newly renovated Ponce City Market  and is a good approximation of what NYC jazz venues like the Jazz Standard  are like.

Ms. Schenck, whose latest cd release is title Aminata Moseka, a tribute to Abbey Lincoln, is an Atlanta area resident who studied music therapy at the University of Florida and has her own music therapy practice in Macon, Georgia. This is her third album and on each outing she has employed the artistry of pianist Kevin Bales, bassist Rodney Jordon and drummer/percussionist Marlon Patton.
Ms. Schenck poses a lean, agile figure dressed in a black leotard top with leather pants under a full fringe black leather open skirt, the fringes freely swaying with her every movment. She was barefoot and had a large silver choker, resplendent with semi-precious stones that wrapped her neck and held her head aloft in regal posture. She often danced around the stage between solos adding to the visual.
The crowd was diverse, one made of fans, press and curious first timers like myself. Ms. Schenck is an animated vocal stylist. Her voice is pleasantly mid-range and while limited she has learned to stay confidently within its boundaries, utilizing a spirited delivery and an imaginative use of sound effects- a technique probably developed during her studies with Bobby McFerrin. Her performance is theatrical with roots in cabaret and musical theater more than jazz, but she can swing and shows an intuitive reverence for the music, especially the lyrics. She is at heart a storyteller who on this project has found a fascination with the poetic music of the late Abbey Lincoln. Lincoln herself was both a singer, an actress as well as a social activist.

Schenck started off the evening entering the stage solo, singing the opening breezy, calypso phrases of Lincoln’s “The Music is the Magic” a cappella. Drummer Patton entered and sat in first, adding percussion to the song introducing a bongo-like beat played with his hands on his tom and snare. Bassist Jordan was next to enter, laying down a swaying bass line before pianist Bales joined in adding his rhythmic piano accents.  The effect was dramatic as the group all came together with Ms. Schenck, eventually ending in as a unified group in perfect precision.

Ms. Lincoln’s haunting “Another World,” -which Ms. Schenck told the audience was inspired by the musical tone poem from Stephen Spielberg’s movie about extra-terrestrial contact Close Encounters of the Third Kind - was led off by a sensitive Jordan bass solo. There was a slow percussive rhythm to Patton’s drums that spoke of mysterious distant vistas. Bales offered a delightfully buoyant solo that energetically elevated the entire piece to a new high. Ms. Schenck vocal offered the song’s hopeful lyrics adding her own dramatic facial expressiveness.

The set included Lincoln’s cabaret-like “Wholly Earth,” a bluesy folk song “Throw it Away” based on the magic book the I Ching which featured an extended and impressive bass solo by Jordan, and “Caged Bird” based on the Maya Angelou book, which had Ms. Schenck don some heavy chains to dramatize the captivity portrayed in the song. She fearlessly mimicked bird sounds and strutted across the stage like an angry peacock oblivious to reaction or judgement. The band added to the aural display of the song by offering a bowed bass by Jordan, plucked keyboard strings by Bales and the rattling of some metal conduits by Patton. Ms. Scheck’s commitment to her performance art included a parry of her bird sounds pitted against pianist Bales piano chirps in a display of musical conversation. 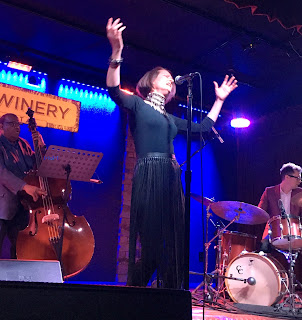 The only song not attributed to Abbey Lincoln was a theatrical version of “If I Only Had A Brain” from the Wizard of Oz. Ms. Schenck’s animated vocal delivery includes her own interpretive body movements and facial expressions that all add to the storytelling quality of her performance.
The set ended with Ms. Lincoln’s uplifting “Talking to the Sun” from her 1983 album of the same name. Ms.  Schenck’s performance and the stellar work of her backing musicians had the audience captivated and she received a standing ovation at the end of the show.

Ms. Schenck should be commended for her inspired tribute of appreciation for the work of Ms. Lincoln. Ms. Lincoln was not content to offer  love songs in her repertoire preferring to speak her mind  as an activist and at the same time embracing a more forward looking vision in her lyrics. The poetry of  this music offers a positive message in a time when positivity is sorely needed and Ms. Schenck's fearless portrayl is a refreshing reminder we should all remember not take oursleves too seriously.