Nate Smith Brings it Home with "KinFolk: Postcards from Everywhere" 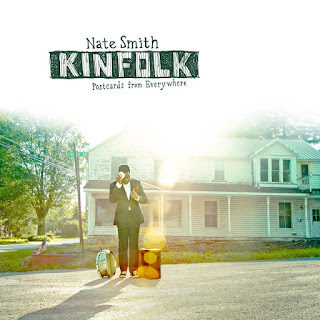 Nate Smith is one of those modern drummers, on the scene, making music that speaks to the present while still having a foundation in the past. His drums have been the backbone of groups led by bassist Dave Holland and saxophonist Chris Potter. The two journeymen play it back here with appearances on three of the albums twelve compositions.

I had the opportunity to see Smith recently while he was on tour with the vocalist Jose James. Smith was the sole musician backing James and the two did a commendable job recreating the complexities of James’ studio album Life in a Time of Madness. The act required Smith to seamlessly mix his live drum work in tandem with some trap and dub step canned music from the album.

On Smith’s latest Kinfolk Postcards from Everywhere we get the best of both worlds. A hip, contemporary compilation of music that has sophistication and creativity for the most demanding, while maintaining a connection to groove and melody that will grab even the most nonchalant listener.  The core group is made up of Smith on drums, synth sounds and Fender Rhodes and providing most of the cd’s compositions- either solo or in collaboration; Kris Bowers is the principal pianist and Rhodes player, Fima Ephron is on electric bass, Jeremy Most on guitars and Jaleel Shaw on alto and soprano saxophones.

The music undulates freely between compositions, with Smith’s drums being singularly unifying element. For the most part it is gentle easy listening music that entertains you without creating a lot of tension and bombast. But for the careful listener there is a wealth of nuance that is joyful to the ear and up lifting to the spirit.

The album starts off with the wistful “Wish You Were Here” and plows right into the pulsing “Skip Skip,” a rhythmic ode with guest artists Dave Holland on bass, Lionel Loueke on guitar and Michael Mayo on vocals and percussion.

“Bounce Parts 1” starts off with a funky beat that folds into a complex dual horn line with guest Chris Potter on tenor and Jaleel Shaw on alto. Guitarist Jeremy Most lays on some funky licks to the mix and Ephron’s bass is elastic but firmly grounded. “Bounce Part II” changes to an airy cosmic groove that offers the ebullient tenor man Potter some room to expand one’s consciousness, and he does so with an earnest solo that elevates impressively.

As this is an album about a traveling musician and his recollections on the road, Smith often finds himself nostalgically thinking about home and loved ones while on tour. He interjects sound bites of conversations with his mother and his father on the two sections “Mom: Postcards from Detroit/ Floyd/Salem” and “Dad: Postcards from Isaac Street.” The album is touchingly dedicated to the memory of Smith’s father Dr. Theodore R. “Mike” Smith.

The lyrical “Retold” is a repeated theme to which Smith has added some rich, choir-like vocal overlays by Michael Mayo. Kris Bowers adds a strikingly sensitive piano solo. All the while orchestrator Smith adds rhythmic variety and percussive touches that bring this one skillfully together.

On “Disenchantment: The Weight,” Smith and company introduces a lush Bowers string arrangement to the enchanting voice of Amma Whatt. Ephron’s tactile bass lines and Smith military cadenced drum rolls create the sturdy backbeat of this composition until the shimmering end. Whatt is also heard on “Morning and Allison,” a new voice to me, she shows great promise.

A probing Dave Holland bass line starts off “Spinning Down.”  One by one the instruments enter, with Loueke’s guitar delicately making an appearance as Bowers plays hushed chords in faded background.  Shaw’s wispy soprano enters for another layer of color and Bowers once again gets a chance to show his pianistic prowess.  About three quarters through guitarist Loueke offers a synth-like solo that is inspired. Ephron and Smith have a kinetic connection that is supple but always tightly aligned.
The breathy voice of Gretchen Parlato is featured on Smith and Whatt’s composition “Pages.”  Despite the nostalgic sentiment of the lyrics, Smith’s orchestration is bright, uplifting and unapologetic. There is a Bruce Hornsby quality to this one, with Most’s fingerpicking, Bowers celeste sounding piano and Shaw’s airy soprano solo all adding to the vibe.  To his credit Smith never lets himself get lulled too deeply into a sappy prettiness, before he peppers the song with his own subtle rhythmic diversity. “From Here -Interlude” and “Small Moves -Interlude” are probably improvisational forays by the band that feel like brief ideas that the band hasn’t fully fleshed out yet.

“Spiracles” features the guitar work of the talented Adam Rodgers and has Bowers using a vibraphone like sound from his keyboards. Smith utilizes a shuffling, agonizingly slow beat while Shaw and Bowers play an undulating melody line. With the pace of this one, Rodgers solo is the epitome of understatement.

The final song titled “Home Free” (for Peter Joe,) is a ballad. From its poignant string introduction, this song carries a special meaning for Smith. The drummer employs a string quartet that he has arranged as the band plays this with almost dirge-like solemnity. Shaw’s alto has a delicate air and Bowers’ piano is a deeply reverent. It is apparent from this heartfelt music that for Smith home is where the heart is.