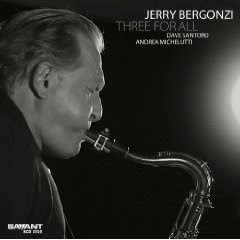 Jerry Bergonzi's Three for All

Jerry Bergonzi has been plying his trade as an extraordinarily gifted saxophonist for many years. As a member of Boston’s jazz inner circle, he is well known as both an educator and a technically superb player. He has also made his mark as a formidable composer, and yet his name is curiously unheralded in the mainstream press or by the general public.

This, despite a series of tours as the saxophonist in Dave Brubeck"s “Two Generations of Brubeck” from 1973-1975, as well as the reincarnation of the Dave Brubeck Quartet in 1979-1981, where Jerry took the role of the late Paul Desmond and made it his own.

Along the way he had notable collaborations with such luminaries as John Abercrombie, Dan Wall, Adam Nussbaum, Mick Goodrick, George Garzone and others too numerous to mention.

On this his most recent release, he is joined by long time associates Dave Santoro on bass and Adrea Michelutti on drums thus the title
Three for All

The album starts with the twisting, circuitous playing of Bergonzi on “Crop Circles”. Overdubbing himself on both tenor and soprano, Bergonzi proves he has a marvelous affinity for multiple ideas on the same theme which he weaves together in a seamless array of notes that simply flow beautifully together. He uses this overdub technique on several tunes on this album to great effect.

On “Obama”, Bergonzi plays in a slyly cool and almost aloof way during the repeating melody line. Sonny Rollins comes to mind here. Confident, collected and coolly in command is the message. With bursts of creative energy released in measured spurts, Bergonzi may be intimating that hidden under the cool exterior there is an incendiary inner core that quietly burns.

The fatalistic tone of the “End of the Mayan Calender” is the perfect aural representation of the forlorn coming of the end of days. Here Bergonzi’s horn cries in a sustained moan that is not so much fearful as it is more resigned to the inevitable. I am struck by the sheer originality of his statements. He never repeats pat phrases or approaches themes from the same direction. His playing is always surprising as it simmers with an intensity that rarely utilizes overstated screeches or scalar runs of too many notes to make his point.

“Between the Lines”is another dual voiced piece that allows Jerry to play off of his own alter ego during the opening statement. Bergonzi enjoys using the soprano as a harmonizing instrument to his tenor,but it is the tenor that he uses for real communication. He seems to be talking to you more than playing for you. His sound is both melodic and conversational.

“Demolian Mode” features Santoro walking his bass in a seemingly patternless manner, while Michelutti prods the accents from his drum kit, barely keeping time. Bergonzi probes the modal piece on tenor in a wandering, restless way.

“Bluebonics” finds Bergonzi utilizing his skills on piano, soprano and tenor,with the effect giving us a glimpse into Bergonzi as the composer. His use of the harmonizing sounds of soprano and tenor is once again employed to create a layered, multi-tonal effect with the comping piano adding a percussive element.He modulates his tone in a very controlled manner and produces a sound that glows with the warmth of a fanned piece of hot charcoal.

On “FDIH” and especially “Horus" I am haunted by the similarity to Michael Brecker’s delivery. Bergonzi is in no way imitative of Brecker, but seems to be channeling him on this number. There is a great deal of that impatient, impassioned playing here, more so than on any other tune on the album. It is good to hear that spirit again. I was a big fan of Michael Brecker and his sound is sorely missed. Bergonzi is a player of equal excitement if not notoriety. Santoro's bass is particularly emotive on this song.

On the opening of “Tectonic” Begonzi’s uplifting soprano is featured again in tandem with his own tenor and his own overdubbed comping piano. When his tenor takes over he delivers a sensitive and powerful series of unique statements that seem to offer a tip of the hat to the late Joe Henderson.

With comparisons to Rollins, Brecker and Henderson one might get the impression that Jerry Bergonzi is just another imitator, but that would be woefully incorrect. Bergonzi has his own distinctive sound; one that should be appreciated on its own merits. He has distilled the best of these artists into his music through his virtuosity and compositional artistry.