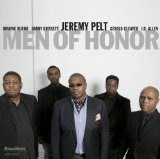 Trumpeter Jeremy Pelt possesses a round, lyrical sound that places him in the top tier of current players in the post bop tradition. On Men of Honor

Pelt’s working band of J.D. Allen on sax, Danny Grissett on piano, Dwayne Burno on bass and Gerald Cleaver on drums have each contributed compositions that make up this tribute - an homage to both the jazz tradition and the working jazz band.

Starting with bassist Dwayne Burno’s “Backroad”, the music features the front line of Pelt and Allen, hauntingly in the tradition of vintage Jazz Messengers. Allen’s deliberate tenor phrasing is refreshingly uncluttered. Following in stark contrast is Pelt’s animated, biting trumpet solo which is sprinkled with familiar phrasings and fluid arpeggios that sound convincingly inspired by early Freddie Hubbard.
For his part pianist, Grissett moves up and down the keyboard with a gentle, fluid grace while Burno and Cleaver keep the pace on target throughout.

“Milo Hayward” is a jagged Pelt original dedicated to his son. The start-stop pace of the tune allows a Shorteresque sounding Allen and a purposely jagged Pelt to play in an unfettered stream of consciousness.Grissett alters the pace of the song with a pretty melodic solo before Cleaver punctuates the piece with a choppy flurry on drums at the coda. 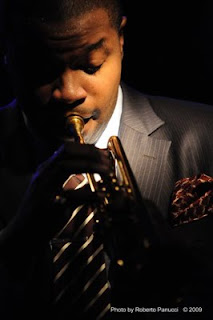 J.D. Allen’s composition,“Brooklyn Bound”, finds Pelt at his most lyrical. Here Allen takes on a Dexter Gordon-like tone and phrasing which is quite compelling. Pelt squeezes out slurs of passion from the warm notes of his flugelhorn in a sensitive solo that echoes memories of the late Art Farmer.

Drummer Cleaver’s compositional contribution is “From A Life of the Same Name”, a beautifully pensive piece where both Pelt and Allen play with purposeful sensitivity and thoughtful restraint. The melody has surprising turns that demand the listener’s attention and the entire group contribute to the song’s poignant quality.
“Illusion” is an uplifting, easy swinging Pelt composition, where he chooses the distinctive sound of the Harmon mute for his trumpet. After a brief melodic piano solo by Grissett, Allen plays a deeply evocative saxophone solo using an economy of notes to make his point. Pelt’s brightly muted trumpet has a joyful, uplifting sound on this song that brings a smile to your face with its inspired lyricism.

“Us/Them” features a nice front line duet with counterpoint soloing by drummer Cleaver. There is a call and response segment first between Pelt and Cleaver and then between Allen and the drummer. Blakey would be proud.

The last tune on the album is a slow medium tempo composition by the pianist Danny Grissett titled “Without You”. Cleaver starts with a cymbal building entrance followed by a front line lead. Short lyrical solos by Pelt on flugelhorn again remind me of Hubbard at his most sensitive, Allen on tenor and a tingling piano solo by the composer Grissett finish this tight little gem.

After consistently being acknowledged as an "up and coming" artist, Pelt has finally arrived as a maturing musician whose is a respectful guardian of the jazz tradition and a blossoming composer in his own right. With “Men of Honor” Pelt and his group prove how effective a regular working jazz band can be.