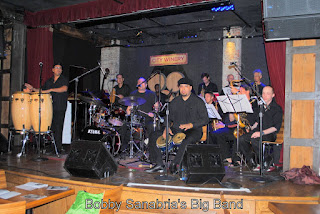 Last night I attended the 2010 Jazz Journalist Association Awards ceremony at the City Winery in lower Manhattan. The event was a joyful meeting of the jazz community, bringing together the musicians, publicists, record producers, journalists, broadcasters and educators who all in some way symbiotically allow this art form to flourish.

Jazz, as a musical genre, is as diverse as the community it serves. The performers that graced the stage of the City Winery, as well as the award recipients were emblematic of this wonderfully unifying reality. The event would have been impossible without the dedicated work of JJA president Howard Mandell and several supporting members including the tireless efforts of event co-producer Yvonne Ervin. 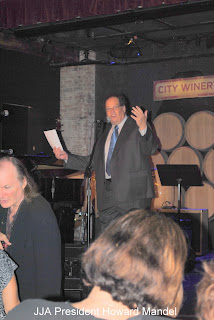 The attendees were treated to various homemade wines and
hors d'oeuvres by the venue's gracious host Michael Dorf, owner of the City Winery. The performances were somewhat overshadowed by the bustle of the normally savvy and discerning crowd. With so many heroes, contemporaries, fellow artisans and fellow writers in the attendance, it was just too difficult for many of the attendees to quietly focus on the music. People milled around, meeting, greeting and mingling in a rare chance to connect. The ceremony was simulcast live, with streaming broadcasts to parties that were organized in other satellite cities. The  performers valiantly carried on, oblivious to the ambient buzz. The internationalism of the music ranged from the thoughtful solo styling of  Japanese pianist Ayaho  Shirasaki, to the deceptively easy listening sounds of the Serbian guitarist Rale Micic, with his Balkan folk music infused jazz trio. The home grown sounds of DC born  Marc Cary's Focus Trio played with an intensity that had many in the audience mesmerized. Colorado born saxophonist Tia Fuller , a  member of Beyonce's all female band, headed her own Quartet with the alto saxophonist  showing her prowess on the horn.  Bobby Sanabria's grammy nominated Big Band ended the evening's music with a smokin' set of Latin-infused big band music that got everyone's feet tapping. 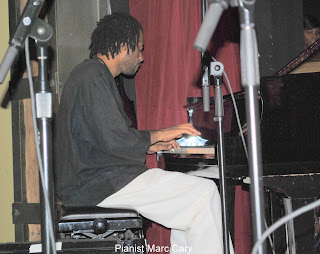 I won't go into listing all the nominees and the winners of the awards as they can be found in a beautifully succinct and organized fashion at JazzTimes here .

Despite a traumatic year in which he freakishly broke his arm twice, Joe Lovano won three awards- one for "Tenor Saxophonist of the Year", one for "Best Small Ensemble of the Year" with his "Us Five" group and the prestigious "Record of the Year" award for his brilliant  "Folk Art"

In deference to a solid body of work, the saxophonist James Moody was honored with the "Lifetime Achievement" award, but was unable to attend due to recent surgery. The audience was sprinkled with plenty of other jazz veterans including past award winner altoist Lee Konitz, saxophonist Lew Tabakin, chanteuse Sheila Jordan,  saxophonist Jimmy Heath, producer of the year George Wein, trombonist of the year Roswell Rudd and this year's award winner for best organist Dr. Lonnie Smith along with other journeymen musicians and writers.

Youth was also in abundance at this years awards ceremony, a sign of a bright and vital future for this music. "Musician of the Year" pianist Vjay Iyer, "Alto Saxophonist of the Year" Rudresh Mahanthappa, "Up and Coming Artist of the Year" composer/ arranger Darcy James Argue, mallet master award winner Stefon Harris and drummer extraordinaire Matt Wilson were all in attendance. 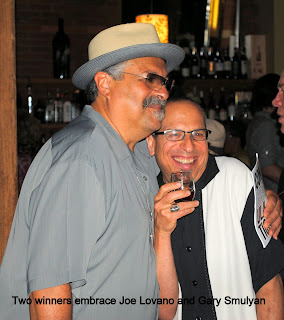 I came unaccompanied to the event, but with all the love in the room, a love generated from a love of this music, I wound up having a great time sharing a table with two wonderful singers, female vocalist Perez and male vocalist and award nominee Giacomo Gates. Also seated at my table were two other nominees, the dynamic baritone saxophonist Claire Daly and talented flautist/composer Jamie Baum.

In keeping with the international flavor of the event the "Jazz Picture of the Year" was awarded to a black and white shot of the trumpeter Tom Harrell, set against a huge curtain by Russian photog Lena Adasheva. Click to here to view.

Fellow blogger Doug Ramsey won best "Blog of the  Year" for Rifftides, congratulations to Doug.
I 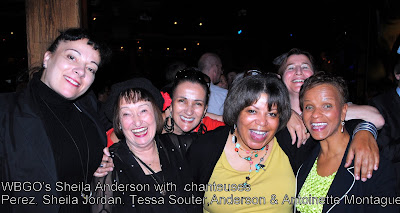 It was a great time of celebration. The outpouring of love and camaraderie that this community has is both heart warming and inspiring. The JJA should be applauded for creating and fostering this forum of recognition and celebration. Despite the harsh economic realities of the music business in particular and the economy in general, I came away with a renewed spirit of hopefulness. Hopefulness that this music is the key to a communication that fosters tolerance, inclusion and spirituality and needs no translation. Hopefulness that this music transcends nationalistic borders, cultural differences and is immune to totalitarian restrictions. This year, with many awards going to younger artists who have an ever expanding creative vision of the future of jazz music, I have come to believe that we are on the dawn of a new era for this music. Bandwidth is the highway to global interactivity and cooperation. It recognizes no boundaries, proving to be both pervasive and resilient to attempts at censorship . Music, and in particular jazz music, is the universal interpreter of the cooperative message of love.