Friends of Santa Fe Jazz is an organization, since its inception in 2006, dedicated to preserving and supporting live jazz in Santa Fe, New Mexico.. Billed as "a group of jazz soul mates" and co-chaired by one time President of the prestigious Berklee School of Music, Lee Berk and his wife Susan, the non-profit group organizes and presents top- notch jazz entertainment in intimate venues around the Santa Fe area.

By sheer coincidence, or shall I say synchronicity, I was at the Jazz Journalist Association yearly awards last week in New York City and had the privilege of sitting with several musicians and singers who were up for award consideration. One of these happened to be the fine singer Giacomo Gates who had been nominated as "Best Male Vocalist of the Year" by my fellow members of the JJA. While we were enjoying the proceedings, which included many fine performances by some notables like the Marc Cary Focus Trio, The Tia Fuller  Quartet and the Bobby Sanabria Big Band, I asked Giacomo where he would be gigging next. Much to my surprise he told me that he would be playing  in Santa Fe, New Mexico next week for the Friends of Santa Fe Jazz.  As life would have it, I too would be in Santa Fe that weekend and so I told him I would make the effort to get to see him perform there.

On a perfectly sunny Santa Fe afternoon, Giacomo Gates was performing in a splendidly outfitted open-aired banquet hall of the La Posada Inn and Spa. The room seated approximately one hundred and twenty patrons at twelve tables. The mostly middle-aged crowd came for an afternoon of jazz and brunch, with the music being provided  by the beguiling Mr. Gates backed by a local group, the John Trentacosta Trio, which included the drummer John Trentacosta, the bassist Michael Olivola and the keyboard artist Brian Bennett. 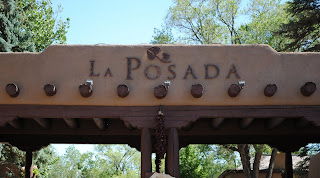 Mr. Gates is a tall, gangly man with large, strangely comforting features that give you a glimpse into a life that wasn't always spent singing in front of  sophisticated admirers in posh settings. By his own admission, he has spent years running bulldozers and doing other construction related  jobs-at one time running off to find adventure in the wilds of Alaska during the construction of the pipeline in the mid-seventies. With a traditional upbringing that stressed a love of music as an avocation but never as a profession, it is to his credit that he was able to eventually follow his heart and let his unique vocal talents flourish to the benefit of all.

With a warm, distinctive baritone voice that has the deep coffee tones of a dark roast, he is as disarming a troubadour as they come.  His set featured many songs from his latest release Luminosity

. His delivery is smooth, confident and conversational with no traces of  arrogance. He is an endearing storyteller, as was on display by his tongue-in-cheek take on the old standard "Pennies from Heaven". Mr. Gates cleverly portrays a cuckolded soldier who returns from a three year stint in the service only to find his wife presenting him with a newborn son. Her explanation "Bennie's from Heaven".  His silky baritone is particularly adept at ballads like his slow, sensual take on "You Go To My Head"  or his hip rendering of the Gershwin classic "Summertime". 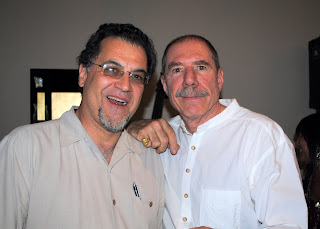 Like one of his influences, the late Eddie Jefferson, he is a master of the art of vocalese and scatting , studying instrumentalist solos from the likes of Chet Baker (on "But Not For Me" )  and Charlie Parker (on "Lady Be Good" ), precisely duplicating them with his voice in all their labyrinthine complexities.  Several times during the set he vocally mimicked instrument sounds. He voiced solos on bass, trombone and flute much to the surprise of the audience as well as the amusement of his band members- the highlight being his trombone solo on Cole Porter's "You'd Be So Nice to Come Home To".  He was equally adept at taking the bossa sound of Horace Silver's "Song for My Father" , a especially relevant song on this Father's Day, and inserting percussive accents making it his own. 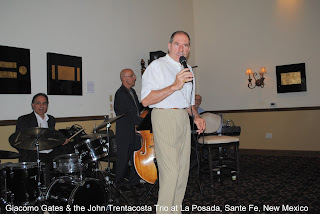 Mr. Gates was ably accompanied by the fine work
of the bassist Michael Olivola who was particularly  sympathetic on the duet  " But Not For Me".
Mr. Trentacosta  unfailingly kept the pulse of the session while Mr. Bennett's electric keyboard solos filled the spaces with thoughtful comps and probing solos. The band instantaneously responded  to
Mr. Gates who directed the starts and stops of
the program with the ease of an accomplished conductor.

Mr. Gates is a true treasure that should not be missed in "live" performance, where his warm personality adds another endearing element to his considerable vocal talents. His performance at La Posada was a tour de force and was undoubtedly the jewel of the season for the Friends of Santa Fe Jazz 2010 concert series.