Review of Tim Hagans “The Moon is Waiting” 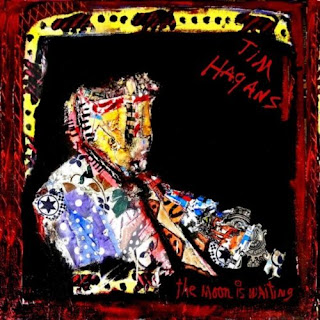 Tim Hagans “The Moon is Waiting”
Palmetto Records
Recorded March 3rd& 4th 2011 at Maggie’s Farm, PA.
For the last several years, the trumpeter Tim Hagans has been a ubiquitous force on the modern jazz scene, both as a powerful voice on his instrument and as a talented composer and arranger. Recently, at the season’s opener for the Westchester Jazz Orchestra, Mr. Hagans was seen putting those skills to work. As a featured soloist, his high-energy volley with the guest saxophonist Joe Lovano was a highlight of the evening’s performance. His deft arrangement of Lovano’s “The Dawn of Time” demonstrated his talent for thinking beyond the boundaries of his own instrument.
His collaboration with the pianist Marc Copeland on “Alone Together” was a sensitive collaboration that showed rare intuitive interplay. Check out their wonderfully evocative “You Don’t Know What Love Is” . 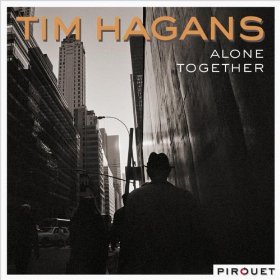 “The Avatar Sessions” from 2009, found the trumpeter collaborating with a who’s who of jazz, including the saxophonists George Garzone and Dave Liebman, fellow trumpeters Dan Johansson and Randy Brecker, bassist Rufus Reid and drummer Peter Erskine, as well as the Norrbotten Big Band from Sweden. This ambitious project featured a modern score of great breadth written and arranged by Hagans. One of his songs “Box of Cannoli” from this session, dedicated to Frank Foster, earned him a 2011 Grammy nomination for best Instrumental song. 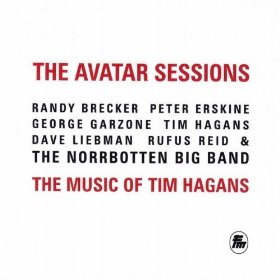 On his latest release
“The Moon is Waiting”, the bassist Rufus Reid, the guitarist Vic Juris and the drummer Jukkis Uotila join Hagans in this deceptively free session.  As with Avatar, the album is made up of all original Hagans’ compositions. They span the spectrum of styles, this time in a quartet format. The colorful cover art by Peter Josyph compliments the overall experience of this noteworthy album.There should also be an ex-claimer for those who maybe unprepared to seek adventure! This is high energy music is played with a structured abandon that may be unsettling for those who love strictly melodic forms. It is also the product of an expansive and creative musical force. Caveat emptor.


Hagans explores the jagged recesses of Ornette Coleman's influence on his music with  "Ornette's Waking Dream Of A Woman". Guitarist Juris creates a chicane filled solo complimented by his exceptional ability to alter the sounds emanating from his guitar to great effect. Reed and Uotila form a powerfully propulsive rhythm section as Hagans skies ona high energy romp. It is the Hagans-Uotila link that seems to propel the music to the outer limits of its possibilities. As Tim states in the liner notes of Uotila "He creates the most incredible wave  you can ride like a surfer."
On the title track "The Moon is Waiting" we are given  choruses of  what seems to be a prelude that lead to an unreachable resolution . Accentuated by a fusillade of cymbals, toms, modulated guitar chords,and slurred bass notes; Hagans screeches, triple tongues and howls above it all pushing the limits of his horn. It is as if the moon has seduced him into a Werewolf-like transformation.
On the ruminative "Get Outside" , Rufus Reid plays a repeating line that is the basis of the tune. Uotila plays some isolated piano lines as Hagans' horn and Juris' guitar have an obscure musical conversation. Juris has a seemingly endless bag of electronic sounds he can produce at will. Reid, Utolia and Juris finally break into a rock-like, power chord driven finale that ends with a muted Hagans slurring his way to silence.
"First Jazz" is a hard driving tune that features some beautifully crafted guitar work by Vic Juris. The man is an unpretentious magic box of ideas and creativity. Reid's driving bass is prominent as Hagans  sponaneously creates a flowing, uninterrupted barrage of bopish notes, deftly complimented by Uotila's forceful  traps work.
The funky "Boo"is resurrected with Juris and Reid from the "Avatar"  sessions. The catchy tune is a perfect vehicle for bassist Reid to pluck some soulful bass lines. Hagans is inspired to howl into his trumpet producing an eerie, whirling, scream-like sound. Juris spins an inspired solo that has Frisellian twangs while retaining its own uniqueness. The tune ends in a Hagans' guttural howl..


"What I'll Tell Her Tonight" is sensitive, guitar featured ballad that is initially played by Juris accompanied with just bass and brushes. Juris's notes are the epitome of tasteful lyricism. Reid provides subtle warm tones before a muted Hagans joins the fray.Tim's penchant for high register atmospherics gives way to the more lyrical side of his playing on this beautiful melody.


"Wailing Trees"  is a dedication to the trumpet player Tomasz Stanko,  a proponent of free protest music in his own country Poland during the 70's. Hagans sound is very reminiscence of Stanko's music. The song was developed in Stanko's style as a protest to the outrageous lack of action Hagans witnessed during the early days of hurricane Katrina. Here the Hagans-Juris interplay is forceful. The outrage is channeled  into a frenzy of notes by Hagans. Juris modulates his guitar and Uotila creates a torrent of wind and sweeping propulsion with his drum set.


The album closes with "Things Happen in a Convertible" ,a sauntering, hard bop tune with some poignant interludes that features Hagans at some of his most lyrical. Reid's beautiful bass solo and a flowing guitar solo by Juris seem to be the source of his inspiration.


Hagans is a force to be reckoned with. A no compromise musician who likes to push the envelope,work dangerously and expand the possibilities of his music leaving any hint of a comfort zone in his wake.