Two Saturday’s ago, in the sleepy town of Irvington, NY,  the Westchester Jazz Orchestra kicked off their 2011 season with a very special guest, the eminent saxophonist Joe Lovano. The Westchester Jazz Orchestra is a rotating group of talented, working musicians, who carry on the tradition of big band jazz orchestras. The group is a non profit whose executive director Emily Tabin works tirelessly to sustain this wonderful musical resource for the benefit of County residents, as well as anyone else who follows their concert schedule.
The artistic director is Mike Holober, who directed the orchestra on this particular evening and also arranged the music for three of the nine scheduled pieces for this performance. Mr. Holober has  recorded as a sideman and leader on many recordings. Mr. Holober is a pianist/composer who teaches Jazz Studies at City College in NY and is a Associate Guest conductor for the wonderful HR Big Band of Frankfurt, Germany.
The evening started off with a brief conversation with the saxophonist Mr. Lovano moderated by the WJO’s Mr. Holober. Joe recalled his upbringing in a musical family in Cleveland, Ohio where he started playing around the age of five or six years old. He described his years of education at the Berklee School of Music in Boston where he met many of his musical contemporaries. He spoke of paying his dues as a sideman with organ based groups playing on what he called the “chittlin’ circuit” behind the likes of Dr. Lonnie Smith and Brother Jack McDuff. He recalled formative years playing in the big bands of Woody Herman and the Thad Jones/ Mel Lewis Village Vanguard Orchestra, that he acknowledged were incubators for his developing sound. Joe has a special relationship with the WJO as he has been on the advisory board since the formation in 2003.
When the discussion was open to the audience for questions, unexpectedly, the widow of late saxophonist Stan Getz, Monica Getz, rose to speak. She relayed to the audience and to Mr. Lovano how much Joe's playing reminded her of her husband Stan’s playing. Despite Mr. Lovano’s success, he retains a genuine air of humility and this unsolicited comparison to an icon was a bit disarming for him. Lovano’s sound, which at times can be tonally like Getz, has an exploratory approach more strongly influenced by Coltrane than by 'the Sound". When asked about his participation in this big band Mr. Lovano said he was favorably disposed to all types of musical settings, especially those where he finds some inspiration from his fellow musicians. On this evening the WJO was featuring some of Lovano’s own musical compositions, as well as some songs that were especially relevant to his repertoire of recorded work. 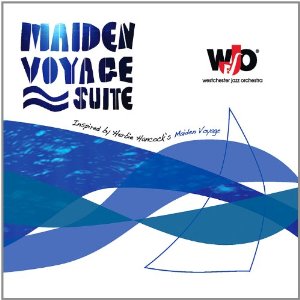 After a brief intermission the orchestra took the stage and the show began with a Peter McGuiness arrangement of Herbie Hancock’s classic “Maiden Voyage”. This piece is featured on the WJO’s latest cd “Maiden Voyage Suite” recently released in August of this year. The song is the perfect vehicle for the orchestra as the brass and reeds were deftly made to ebb and flow behind the memorable melody line. David Brandom offered a beautifully airy soprano saxophone solo and trumpeter extraordinaire Marvin Stamm offered a impeccably flawless solo of his own on flugelhorn. Mr. Stamm’s playing alone is worth the price of admission to this fine orchestra.
The band’s second piece was a Bob Brookmeyer arrangement titled "American Express". The cascade of horns in this piece is signature Brookmeyer and the WJO played it like it was written for them. John Riley’s propulsive drums and Harvie S’s pulsing bass carried the rhythm throughout. A low register solo by tenor saxophonist Ralph Lalama tops off the number.
Joe Lovano enters from stage right to play on the Mike Holober arrangement of Joe’s own composition “His Dreams”, a song Joe wrote about his father’s aspirations for his young son. It is immediately apparent that Joe commands the stage with his warm  full bodied tenor. The band is engaged giving it they’re all and ffollowing intently during Joe’s solos. It is especially interesting to watch the saxophonists immerse themselves in the inventiveness and quality of Joe’s solo runs. He is clearly admired. Joe, in turn, lays out during Ted Rosenthal’s exceptionally pretty piano solo. He is equally energized watching the rhythm section of Harvie S on upright bass and John Riley on drums as they push the song along.
The second Lovano composition is  “Fort Worth”, arranged by WJO trumpeter Tony Kadlek. After a brassy introduction, we hear Joe taking on a cadence that reminds me a little of Ornette Coleman. A rousing trombone solo by Mark Patterson blisters and gets bassist Harvie S playing with abandon. Sensing the energy Mr. Lovano picked up the pace with his own incendiary solo that has him turning shades of scarlet as he flutters through rapid runs all over the register of his horn. The band punctuates the breaks behind him and the song ends powerfully over John Riley’s splashing cymbals as Lovano and Riley call and respond in a duel of ideas.
After a brief intermission the second set begins with an arrangement by trumpeter TimHagans on Lovano’s  “The Dawn of Time”. Hagans is a formidable trumpeter in his own right who is a modern day proponent of the fusion era Miles Davis atmospheric sound. He also is a talented arranged/composer. A beautiful Johnny Hodges-like saxophone solo by Jason Rigby is a highlight of this song.
The next selection was another Herbie Hancock song arranged by Mike Holober “ Survival of the Fittest” which featured a stirring high register solo by trumpeter Tim Hagans, who was sitting in for Scott Wendholt. Hagans performance was an unexpected treat as the man can soar at almost any pace. Contrastingly, saxophonist Jason Rigby offered a smooth, deep register solo on tenor as Harvie and John drove the rhythm hard. The orchestra seamlessly transitioned to another classic Hancock song  “Dolphin Dance”, this one arranged by the absent Tony Kadleck. Lovano’s fellow vanguard orchestra alumnus, saxophonist Ralph Lalama gave his most impressive solo of the night on this memorable melody. Mr. Stamm was again featured on a moving flugelhorn solo.On this particular song you could really hear how magically the sound of these seventeen individual players was organically transformed into a single coherent voice, the true tell of a great big band. Players like trombonists Larry Farrell, George Flynn and Bruce Eidem; trumpet players like Jon Owens (substituting for Tony Kadleck) and Craig Johnson; saxophonists Marc Phaneuf (substituting for Jay Brandford) and Ed Xiques along with those mentioned previously all create this unified sound that is the WJO.
The last two songs were two of Mr. Lovano’s “ Birds of Springtime Gone By”, arranged by Jason Rigby and “Hot Shot” arranged by director Mike Holober.
On “Birds” Mr. Lovano and Mr. Hagans each had solos on their respective instruments before they volleyed with each other in an interesting exchange of high energy.
On “Hot Shot” Mr. Lovano took flight on a high register solo. The encore was Thad Jones’s “The Interloper” which featured solos by Joe Lovano, Ralph Lalama and a excellent piano solo by Ted Rosenthal.
All in all it was an auspicious opening night for the WJO and a harbinger of what to expect for this upcoming season. Seeing Mr. Lovano perform in such good company was a real treat. If you love big band music you must make it your business to see one of the upcoming performance that the WJO will be performing this year. The next scheduled show is at SUNY in Middletown, NY on November 19, 2011 with another show scheduled in Irvington for December 3rd.