On a beautiful Sunday afternoon in the bucolic village of is a small church that is perched at the top of the hill at the intersection of Rte 137 and Rte 172. Within the hallowed walls of this classic structure, originally built in 1833, musical director and pianist Pete Malinverni and Pastor Lori Miller have fashioned a welcoming non-denominational environment where music is celebrated. Mr. Malinverni is a well known jazz pianist and has composed sacred music in various forms. He is an active  educator who has taught or presently teaches at , and SUNY Purchase Conservatory of Music. Since 2012 the church has used their Jazz Vespers series as an outreach to the community at large.

On this Sunday the featured artist was the saxophonist Steve Slagle and his quartet. Mr. Slagle is an active musician who frequently plays and tours with his long time collaborator the guitarist Dave Stryker and has been a musical director of the Mingus Big Band for many years, He is an active collaborator with musicians as varied as Stevie Wonder and Milton Nascimento to the saxophonist Joe Lovano.  His most recent release is entitled Evensong on Panorama Int’l Records and features Mr. Stryker on guitar, Ed Howard on acoustic bass and the drummer McClenty Hunter. 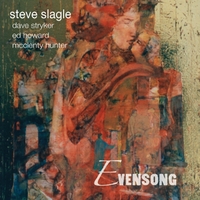 On this afternoon, playing to a small audience of maybe fifty congregants, Mr. Slagle was joined by the pianist Bill O’Connell, the bassist Aidan O’Donnell and the drummer Steve Williams. The group started the program with the standard “Just in Time” with Mr. Slagle on alto saxophone. His sound to me was reminiscent of a young Phil Woods, as he has a hard bop sound that is fluid with a warm timbre. Mr. O’Connell is a large, gangly man who comps with delicate firmness and solos with a fleet right hand
that possesses a seemingly endless array of ideas. The drummer Mr. Williams, an animated participant, listens intently to whoever is soloing and compliments their lines with his own deft punctuation.  Mr. O’Donnell, the youngest of the crew, seemed content to lay down a solid bass line and revel in the joy of playing with such accomplished contemporaries.

For the second song of the set Mr. Slagle offered his own composition titled “Equal Nox” from his latest release. He explained the song was written on John Coltrane’s birthday, September 23, which is one of two days during the year when the day is equally as long as the night. With a cascading opening evocative of Trane and a catchy vamp,  Mr. Slagle employed a searching tone to his alto. The quartet moved into the tight groove with O’Donnell's walking bass line anchoring the tune. Mr. Slagle ran arpeggios of sound that often crested in the high register, all done with superb control. Mr. O’Connell played a particularly syncopated solo, filling the lines in between his chords slightly behind the beat.

The third song of the evening was another Slagle composition, the song “B Like Me” from his latest release Evensong . Slagle played a series of liltingly smooth glissandi as Williams seems to prod him along with encouraging grunts and smart accents on the rim of his snare, the two enjoying the interplay.

After a brief reading by Pastor Lori Miller that included a passage from the Bible, Psalm 107, and a reading of a poem by T.S. Elliot, Mr. Malinverni reintroduced the group.

Mr. Slagle took up his flute to play the Carl Fischer/Frankie Laine ballad “We’ll Be Together Again” His sensitive sound was bright and airy, floating over Bill  O’Donnell’s block chords and the plangent bass lines of Mr. O’Donnell. Mr. Williams lent elegant support on his brushes.

The afternoon’s set ended with a composition by Mr. O’Connell titled “Pocket Change.” Mr. O’Connell is an accomplished player who in his own groups has a decidedly Latin inspired tilt to his music. This composition started in a quick paced 4/8 time changing at intervals to 6/8 time, confiounding the group at first, before they settled  into the pattern of the rhythm. Mr. O’Connell’s playing was inspired with bursts of blazingly fast runs by his right hand. Mr. Malinverni, himself an accomplished pianist, watched on admiringly.

Mr. Slagle negotiated the mixed rhythms of the song on his alto with graceful crescendos of his own. The congregation was duly impressed by his expressive performance and generously applauded the musicians in a appreciative demonstration of thanks and admiration.

The Jazz Vespers series will continue on Sunday April 24, 2013 witha perfromance by the fine tenor saxophonist Ralph Lalama and his group. There is no cover but a generous donation for the musicians is highly recommended.