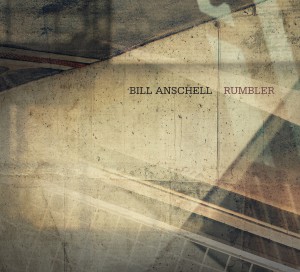 The pianist Bill Anschell was surprisingly self-taught, he subsequently studied at Oberlin College and Wesleyan under some influential teachers. After receiving his master's degree he came to Atlanta in 1989 as the jazz coordinator for the Southern Arts Federation. He eventually formed an internationally syndicated radio show “Jazz South” and became steeped in the Atlanta jazz scene, with his trio performing at the 1996 Summer Olympic Games and the Atlanta Montreux Jazz Festival.

The work of the now Seattle based pianist Bill Anschell is new to me and it was with a no anticipation that I found myself being drawn in by his latest album Rumbler. Anschell starts it off with his own quirky rendition of Monk’s “Misterioso,” which combines elements of Monk’s angular style with Anschell’s own unique interpretative bent. Anschell’s core rhythm section is made up of Chris Symer on bass and Jose Martinez on drums. After a sparse single note piano and saxophone presentation of the dissonant melody line, with tenor being manned by Richard (not Richie) Cole, Anschell takes the tune into modernity, injecting Brian Monroney’s electric guitar, bass and drums pounding out a booming, brash counter-melody to the ascending and descending lines of the composition. The tune then turns into a Monroney led blues ballad, but only for a brief stint, before the group jumps time signature once again. This time, backed by a Symer walking bass line, Anschell offers an inspired piano solo. The band changes time again to provide Cole a gutsy tenor solo. If you think there is a lot going on here, you’d be right, but it all comes together remarkably well and during this brief a little over seven-minute trip we get some fabulously stirring music.

“Dark Wind” is an Anschell composition derived from the Afro-Peruvian lando, a dance originated musical style. The alto flute of Hans Teuber adds to its soft undulating rhythm. The breezy tune carries you in its sway enhanced by Jeff Busch’s percussion. “Captive Light” is another Anschell composition written in 5/4 time that seems to gets lost in its own beauty, as Teuber plays a very Desmond-esque sounding tenor.

The band returns to more adventurous music with the cadenced strut of “MBK,” a reference to a food court in Thailand. Monroney’s echoing electric guitar rips in raw and Martinez’s traps march the music along with peacock pride.  Anschell’s piano solo is interestingly “out” while still being “in” as the band creates the atmospheric canvas on which to paint. Symer’s bass is a constant grounding bar for this kinetic group. This one rocks.

“No You Go,” is another Anschell composition with a catchy, albeit modal line that the band navigates with precision and unity. Anschell’s solo piano work is fluid and interesting. Symer’s bass solo is quick and clean. Martinez gets a chance to show off a little with some extended trap, tom and cymbal work that is rhythmic without being too flashy.

Anschell and his trio take on an often-neglected Lennon & McCartney standard “For No One.” The song is given a swinging and contemporary treatment that makes you re-appreciate the lasting melody and its possibilities.

The “Rumbler” is brooding, pensive song that features the longing soprano of Jeff Coffin (of Dave Mathews and Flecktone’s fame), floating over Symer’s pedal point bass lines and Martinez’s delicate cymbal based time. Anschell sets the mood with his piano solo before Coffin goes off into an extended soprano solo that soars over the proceedings like a hawk in flight.  Anschell and his rhythm section get to take this one out at the coda with a sense of bravado.

The album continues with “39F”, an easy, samba inspired swinger, that again features Hans Teuber on alto saxophone. “Heisenberg’s Fugue State,” is a reference to the main character, a meth cooking schoolteacher, on the series “Breaking Bad. This one reunites guitarist Monroney with the group, but his time on acoustic guitar. “The Dreaded ‘E’ Word” gets back to more of what I like to hear from this band, a pulsing swinger with rhythmic diversity and Monroney returning to his jagged guitar work and Anschell getting to explore some of his more out of the box ideas.

The cd ends with Duke Ellington’s “Reflections in D,” a pensive and moving solo piano exploration .

Anschell’s playing is contemporary, sometimes pretty, but he has a mischievous, exploratory side that occasionally comes out in his playing and when he has the right players with him, as he does on several of these cuts, he is someone who has something to say.

https://soundcloud.com/billanschell
Posted by Ralph A. Miriello at 3:43 PM