The Beguiling Voice of Marilyn Scott on "Standard Blue" 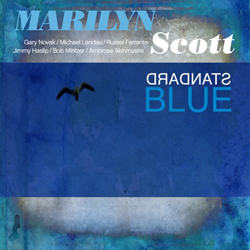 The California based singer Marilyn Scott has one of those soft, sultry, beguiling voices that just sends me to another place. In many respects, she reminds me of Julie London with her controlled, simmering delivery that is not about vocal range or gymnastics, but more about heartfelt interpretation of a song’s sentiment. She has been singing since she was eleven years old and credits seeing  Big Mama Thorton play at Newport Beach when she was 15 years old as a life changing experience. It was the blues that spoke to this young woman and for over forty years she has been following that muse. Over the years, Ms. Scott’s voice has been heard backing up Tower of Power and John Mayhall’s Bluesbreakers.

She has been produced by such musical luminaries as Bob James, Bobby Womack and George Duke. Her musical collaborations with Russell Ferrante and Jimmy Haslip of the Yellowjackets has extended her blues roots and help shape a distinctive jazz sensibility to her vocals.

Her latest album is titled Standard Blue with the word standard spelled in reverse mirror image just to let you know there is nothing standard about her treatment of these songs. The band is made up of a superb rhythm section with Russell Ferrante on keyboards, Jimmy Haslip on electric bass, Michael Landau on electric guitar and Gary Novak on drums.  Saxophonist Bob Mintzer and trumpeter Ambrose Akinmusire are also featured on one song, the Kurt Weil/Ogden Nash classic “Speak Low.”  The song list is made up predominantly of songs that were written between 1932-1956, songs that speak to Ms. Scott and “…have in common the reality of the blues.”

Ms.  Scott opens the music with the well-worn “Willow Weep for Me,” but one would be hard pressed to find another version quite as compelling. Mr. Ferrante’s floating arrangement is cloud-like, Ms. Scott’s voice like a siren’s call of sensual loss and pathos. Meanwhile powerhouse drummer Novak is the model of restraint as Landau’s guitar sings with echoed poignancy. Beautiful.
The more orchestrated “Speak Low” features Haslip’s pulsing bass and the bass clarinet and trumpet of Bob Mintzer and Ambrose Akinmusire respectively. The Mintzer arranged intro is unique, running counterpoint to the song’s melody line. Scott navigates the unusually tricky mix with an assured confidence, never losing the song’s core feel. Ferrante adds a short piano solo before Mintzer counters with his own woody, bass clarinet solo.  Landau’s tasty guitar licks are never far from the mix.

Scott and company obviously have a thing for Billy Strayhorn and Duke Ellington as she has included three songs by the songwriters, “A Flower is A Lovesome Thing,” Day Dream” and “I’ve Got It Bad and That A’int Good.” On Stray’s lamenting “A Flower is a Lovesome Thing” Landau’s guitar cries out on a beautifully realized solo of sublime sensitivity. Scott’s voice has those rarest of qualities, true of all great storytellers, earnestness.

“Never Let Me Go” is played in a buoyant shuffle by Novak and Haslip with Ferrante’s keyboards painting a dreamy soundscape over which Scott’s voice pleads.

“Day Dream” is one of my favorites on the album. Ms.  Scott’s slow, smoky delivery draws you in like a bee to a fragrant blossom. Mr. Ferrante’s arrangements are lush with electronic orchestration. Mr. Landau’s guitar weeps with emotion.

“Blue Prelude” is a Gordon Jenkins song that is right in Ms. Scott’s blues wheelhouse. Her understated delivery has a cool, Michael Frank’s-like removed feel that works into the changes of the song with a laid-back assuredness. At the apex of the song she decides to assert herself, stabbing at the lyrics with authority, matching her voice pointedly with Novak’s synchronous drums. This one is a keeper.

Unfortunately, the album tails off starting with “I Wouldn’t Change It,” which is the only Scott/Ferrante composition on the album. Ms. Scott sings this in a more pop adult contemporary vein losing some of her blues bite-not my cup of tea. The set ends with a disco-esque “East of the Sun,” a lumpy “I’ve Got it Bad And That A’int Good” and a pseudo honky-tonk “The Joint is Jumpin’.”

Ms. Scott’s Standard Blue, backed by an all-star band, offers some compelling renditions of blues-based, jazz standards sung by a unique songstress that knows how to bring new life to old stalwarts.