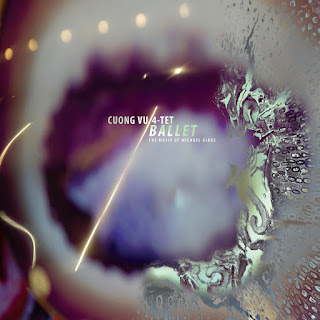 Cuong Vu, the Vietnamese trumpeter/vocalist who contributed so mightily to two Grammy winning records- Speaking of Now from 2002 and The Way Up from 2005- while a member of Pat Metheny’s group has been hailed as a new and significant voice on the trumpet. On his latest release from RareNoise Records, Ballet - The Music of Michael Gibbs Vu is joined by his most recent trio of Ted Poor on drums and Luke Bergman on bass (who on this recording replaces his longtime bassist Stomu Takeishi) and the always superb guitarist Bill Frisell.

To say Vu has an affinity for working with guitarists is probably understatement. He credits Metheny’s  Travels from 1983 as the album that defined his musical direction. Vu explores the very edges of melody, pushing the harmonic boundaries with his trumpet, using unique texture, dynamics and lyricism. On Ballet -The Music of Michael Gibbs- the trumpeter and his trio mates works symbiotically with Frisell to create and interesting suite of music that celebrates the work of composer Michael Gibbs, who taught at Berklee and composed orchestral music that incorporated jazz and rock elements.

The music can seem exploratory as in the title composition “Ballet” where Vu and Frisell carry on a series of fractured musical conversations. The beauty comes in when Frisell and Vu are left to inspire each other’s solo work as the intuitive rhythm section keeps the undulating time.  Vu’s trills are liquid and percolate like water about to boil, Frisell’s guitar is a deft mixture of brushed chords and twangy single notes that dance around the melody in precise movements.

“Feelings and Things” is a gentle, sensitive piece, with both Vu and especially Frisell playing with delicate restraint, extracting tonal beauty from their instruments. Frisell’s notes linger subtly in the air like the scent of a newly flowered Gardenia. Vu’s trumpet is warm and molten, eschewing brashness, as he delivers some haunting passages. Poor’s trap work is sublime as Bergman keeps the reliable pulse.

“Blue comedy,” recorded live, starts with an airy drum intro by Poor before Vu, Frisell and Bergman match each other note for note. Frisell starts this one off with his signature misdirection, a guitar solo that traverses space and time as Poor and Bergman keep some semblance of time. Vu takes a more traditional approach on his solo with, smooth rounded lines that come at you in waves. As Vu’s flurry of ideas reveal themselves, Poor intuitively responds in kind.

The syncopated groove of “And on the Third Day,” another live performance, is the perfect vehicle for the textural Vu’s slurring and spitting trumpet sounds. Frisell’s guitar sends echoed notes into the ether. The rainmaking guitarist can create signature chordal bursts that hang in the air like thick clouds of moisture over which he then plays strummed or plucked single line notes that just sear through the very same density he has just created. The rhythmic groove created by Poor and Bergman is a blank canvas that invites these two artists to apply their strokes of genius.

The closing composition “Sweet Rain,” showcases the most lyrical side of these two musicians. Probing bass lines by Bergman accent some of the most sensitive and melodic playing by Vu. Despite the urge to create on the outer boundaries, there is something about straight ahead ballads that bring out the best in musicians of this high caliber. Frisell’s exquisitely realized solo  is a case in point, a poignant and emotional response to beautiful music.  Poor’s cymbals create shimmering accents at the coda only adding to this rare beauty.