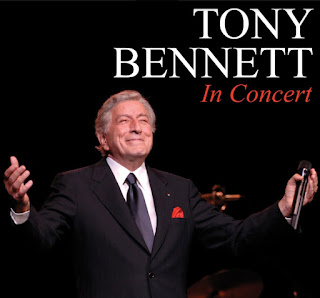 On a warm Tuesday night, at Atlanta’s beautiful Symphony Hall, a beloved figure of American music entertained an adoring audience. The maestro, Tony Bennett, quickly approaching his ninety-second birthday in August, embodied what is meant by the Mack Gordon lyrics “You Make Me Feel So Young.” Energized by the sold-out crowd, many who came to pay homage to a lifetime of over sixty years of epic performance art, Bennett entered the stage to a standing ovation and to the music of Michel Legrand’s marvelous “Watch What Happens.”  The place was charged. The symbiotic relationship between the warm and humble crooner and his audience was palpable. This exchange of energy is the very elixir that keeps the man vibrant, relevant and endearing. He is loved and adored, and he absorbs this tremendous outpour with rare humility and grace, which makes us love him even more.
His voice started with a raspy, slightly gravelly tone and a somewhat diminished range, but what he now lacks in vocal acuity he more than makes up with in his profound understanding of how to deliver a lyric. He is a consummate storyteller who captivates your imagination with his rich embellishment of its meaning. Take his wonderful rendition of the Gordon Jenkins classic “This is All I Ask.”  The lyrics now so much more relevant for a man in his nineties then when he first sang it back in 1963 at the age of forty-three. “As I approach the prime of my life, I find I have the time of my life, learning to enjoy at my leisure all the simple pleasures. And so, I happily concede, this is all I ask, this is all I need.”  The audience responded with a spontaneous round of applause as he sang these words to life.
In a conversation with Marc Meyers on his blog Jazz Wax in 2017, Bennett explained the importance of his relationship with the audience.

"I listen to the audience and feel their enthusiasm. Then I go along with that. I feel their spirit. I'm reacting to what's happening out there, and that's how the show becomes a reality. Once I know the audience is enjoying me, that they love what I'm doing, I'll do something different in response. It's almost as if we're having a conversation in the dark." 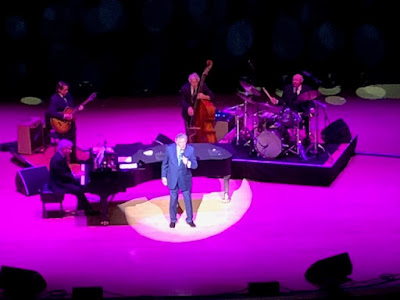 Bennett’s vitality was remarkable. Throughout the one-hour performance he never sat once, only occasionally leaning on the piano.  He walked erectly and with confidence, occasionally circling his bandmates and pointing to them, generously sharing the spotlight, encouraging the audience to shower his fellow musicians with applause. The band was made up of guitarist Gray Sargent, pianist Tom Rainier, bassist Marshall Wood and drummer Harold Jones. Since Bennett admittedly doesn’t prepare specific endings for the songs he elects to sing, the band must be capable of responding instantly to his flights of improvisation, which they did for the most part seamlessly.

Bennett and company ran through the Great American Songbook, swinging with Gershwin’s “I Got Rhythm” done in double time. A master of timing and dynamics, Bennett switched to the Ellington classic “In My Solitude,” where he first sang with restrained aplomb. He skillfully built the tension along the way until the coda, where he surprised many with an explosive ending that he belted out with affirmation, much to the delight of the crowd.

He ran through the repertoire, with most songs timing in at the radio-friendly three-minute mark. The songs included “It Amazes Me,” “Steppin’ Out with My Baby,” “But Beautiful,” “Our Love is Here to Stay,” “My Foolish Heart,” and “Because of You.”  Bennett proceeded with a short medley that included Hank Williams “Cold, Cold Heart,” one of his early hits “Rags to Riches” and his classic “Who Can I Turn To,” which has long been a staple of his repertoire. The music continued with “Just in Time” and “Boulevard of Broken Dreams” and was followed by “The Good Life” which found the singer shouting the words “Wake Up, kiss the good life goodbye” in a powerful display of passion and bravado. It was almost as if he the wise nonagenarian was shaking the audience by the lapels, imploring them to enjoy the life they have every minute of every day. His fans responded several times during the evening to give Bennett a standing ovation. The unspoken question in everyone’s mind was “How can this guy still do what he does at such a high level?” The answer- It’s all about the love. The love Bennett has for his craft, the love his audience showers on him because of his honest integrity and warmth and the love of the music that seems eternal in its message, especially when delivered by one of the all-time masters of the art of singing.

The program continued with “The Music Never Ends” which was decidedly appropriate for this tireless performer. Guitarist Sargent moved centerstage to do a moving duo with Bennett on the Johnny Mandel standard “The Shadow of Your Smile” from the 1964 movie The Sandpiper which had the crowd salivating for more.  Bennett was warmed by the rapturous response and so he mined some more of his treasure trove continuing with Stevie Wonder’s “For Once in My Life” and then giving the audience what they were all waiting for, his signature song “I Left My Heart in San Francisco” which despite his diminishing range he pulled off with an amazing display of sheer will and polish. Sensing his audience was peaking, the master showman continued with “Who Cares” before finishing for the finale “Fly Me to the Moon.”  His voice carrying the seventeen hundred seat hall even without the aid of a microphone.

Bennett embraced himself in a demonstrative gesture, showing his deep appreciation for his audience, throwing them hugs and kisses, raising his hand upward in solidarity, basking in the adulation and was almost hesitant to finally leave the stage. But as he has once opined, timing is an important part of entertaining.

"Know when to get off. You can't stay out there too long. You have to be aware when you've done enough. That often happens at the high point of an audience's reaction during the evening. When I hear that moment, I often say to myself  'I can't get a stronger reaction than this.' I usually leave soon after, on that high note."

Mr. Bennett, with all due respect, you can never stay too long in my book.

Here is one of my favorite Bennett collaborations with the great pianist Bill Evans from 1976. It's just timeless.