A Never Ending Search for the Groove: Drummer McClenty Hunter's "The Groove Hunter"

The drummer McClenty Hunter Jr. is one of those timekeepers that has made a name for himself precisely because he can adapt his playing to suit almost any music. The cat swings on everything he does, whether it be in guitarist/producer Dave Stryker’s trio and larger ensembles, in saxophonist Kenny Garrett’s Grammy nominated quintet or as a valued sideman on other people’s projects.

He’s been on the New York scene for about ten years after having studied with Grady Tate at Morehouse College where he graduated in 2005, and later studying with Carl Allen at Julliard for his masters, which he received in 2007. He has worked with jazz icons like Lou Donaldson, Jimmy Heath, Cedar Walton and Curtis Fuller to name a few and has been recorded extensively.

His debut album as a leader, The Groove Hunter, says it all- he is a man always hunting for that perfect groove. Hunter’s seemingly effortless ability to adapt his style to compliment whatever music is at hand is impressive- his effort is always within the group context. With plenty of facility, he is somewhat selfless musician, an advocate of the total sound rather than promoting his own individual role.

The music begins with the fractious staccato movement in Herbie Nichols “Blue Chopsticks” where Hunter, pianist Eric Reed and bassist Cochran Holt lay down a powerful pace that Hunter accentuates with splashes, pops and crackle. Holt offers a fleet and mellifluous bass solo. This trio shows tremendous intuition and Hunter would be wise to maintain his connection to these like-minded musicians for future projects.

The music ups the ante adding three horns - Donald Harrison’s alto, Stacy Dillard’s tenor and Eddie Henderson’s trumpet-to the rhythm section of Holt, Hunter and Reed. The group pulses in hardbop splendor behind Hunter and Holt’s marvelous in-the-pocket groove. There is some scintillating horn work by these gentlemen on this one that on its own is worth the price of admission.

Hunter proves himself to be a sensitive composer, shown here by his work with Dillard, Reed and Holt  on his composition “Autumn.” Reed’s fluid piano work is a delight. Holt’s bass sings with great sonority. This man has the sound of a mature master. Stacy Dillard is increasingly becoming an important voice on the saxophone. Here he plays with a breezy lightness that nonetheless preserves a sense of poignancy and power. All the while Hunter is quietly in command, the cement that binds them all together.

Hunter enlists bandmate and producer/guitarist Dave Stryker along with piano phenom Christian Sands and bassist Eric Wheeler for a rousing rendition of Stevie Wonder’s “That Girl.”  The trapmaster anchors the tune with a soulful shuffle that has you tapping your feet from the very beginning. Stryker’s guitar is in classic swing mode ala Wes Montgomery, and Sands piano solo is splendidly creative. If this one doesn’t get you moving, call a doctor and check your pulse.

Another Hunter original is the soulful “My Love,” once again played with Reed on piano and Holt on bass. Hunter’s shimmering cymbal work giving the barest accompaniment on the intro until the song erupts into a Coltrane-inspired modal chant. Dillard providing the exploratory tenor solo and Hunter’s exploding drums showing Elvin-like polyphony. Reed’s Tyner-like piano solo is another marvel of absorption and Holt powers full-throated through it all. 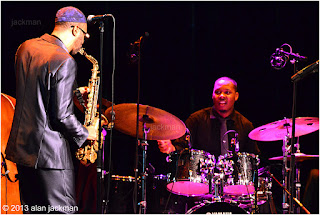 “Sack Full of Dreams” is Hunter’s homage to teacher and mentor Grady Tate. Guitarist Stryker sets his tone to mellow and bassist Wheeler struts strongly. Pianist Christian Sands returns for a thoughtful solo before Stryker lays down some sweet lines and octaves that just melt into the fabric of the song.

Hunter follows with another original “I Remember When,” this time with just Sands and Wheeler. Sands has studied his history and sometimes sounds Garner-esque in his embellishments. Hunter’s brush work carries the rhythm with a gossamer touch before he responds to Sands breakout solo- a fountainhead of pianistic elegance-with his own rhythmic retorts.

John Coltrane’s “Countdown” features some rabid playing by Hunter, Reed and Holt-altoist Donald Harrison offering an incendiary solo that honors the master without copying him. This one cooks and Hunter’s rhythmic drive is impressively unrelenting.

The finale is Hunter’s dreamy “Give Thanks.”  Here he plays toms and cymbals with mallets in a cadence that is particularly alluring. Reed's piano gently comps as Stacy Dillard’s voluptuous soprano work lulls you luxuriously to another place. Cochran Holt’s bass solo is big, round and probing and Reed’s solo is the epitome of musicality.

McClenty Hunter's The Groove Hunter has established this young drummer as a force to be reckoned with. A triple threat as a musician, a composer and a leader. Producer Dave Stryker has once again shown himself to a shrewd judge of talent and his Strikezone record label is quickly becoming a label to watch.