Times Square at night, resplendent in its pixelated luminosity, was clogged with tourists as well as the curious, this despite the recently thwarted bomb attempt on May 1st. The massive showing of police on the scene made it seem like a surreal sequence from a Bruce Willis action film; a city waiting for something ominous to happen. 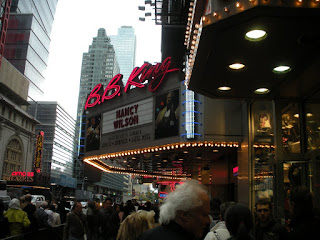 Despite the eerie mood, the marquis at BB King’s Blues Club & Grill announced to the world that Miss Nancy Wilson was making her first New York appearance in several years. An orderly line of well-dressed, sophisticated New Yorkers spanned from the box office, halfway down forty-second street, patiently awaiting entrance to this sold out show.

BB King’s is a spacious venue, seating approximately five hundred patrons, located  at 42nd street between 7th & 8th Avenues. It has an excellent sound system with unobstructed viewing from almost any vantage point.
Her long-time rhythm section of Llew Mathews on piano, John B. Williams on bass and Roy Mc Curdy on drums, accompanied the classy and beautiful Miss Wilson. As the house settled in, the trio warmed up with a swinging version of “Yesterdays”. The tight interaction of these fine musicians showed their mutual affinity.
Miss Wilson entered the stage in a sleek and clinging red gown in great form, looking both radiant and beautiful, belying her true age (she is seventy three this year).
Her mobility was somewhat hampered by a broken ankle which was girded by a soft, black cast which she proudly displayed on her right ankle. This display of gritty showmanship endeared her even more to her already enraptured audience.
The set started off with the Van Morrison

classic “Moondance”, with Ms Wilson inflecting her voice in her own special way, having  only slight difficulty on some of the higher passages. She prefers to be thought of as a “song stylist” as opposed to a singer. 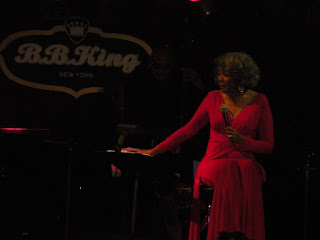 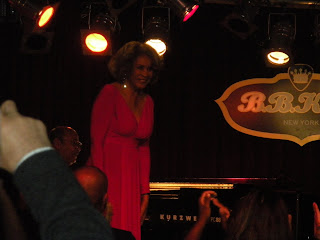 True to this concept, she seems to be able to internalize the lyric of a song, personalizing it with carefully placed changes in intonation, sometimes introducing subtle growls or wavering inflections to give the words a life of their own. The magic is due in no small part to the accompaniment of Mr. Mathews on piano, who seems to know how to deftly fill in the spaces that Miss Wilson deliberately leaves between words.
On “I Wish I’d  Met You”, Ms. Wilson  engages her audience with the personal footnote that it was dedicated to her husband. Her voice gives the  listener a glimpse into her own inner most thoughts and feelings about the song and its relevance and the audience responds accordingly. She is scrupulous in her choice of material. She has easy conversationalist manner which is totally disarming. A case in point is her introduction to Duke Ellington’s

“ Take Love Easy” where she quips to the audience that at her age that is the only way to take love, nice and easy.  Her vocal control became increasingly more refined as the evening progressed; by her own account she has not sung in public for several years.
Perhaps the most moving song of the evening was “Come Home to Me”, a slow blues that she was able to drench in emotion, pathos and sensuality.  She followed this with a slow moving ballad “Don’t Misunderstand” and then as if to prove she hadn’t lost her swing she sang “ I Thought About You” with up beat solos by bassist Williams and pianist Mathews. For most of the evening drummer Roy McCurdy was content to anchoring the beat only occasionally breaking out and soloing briefly. Llew Mathews switched to electric piano for Ms Wilson’s version of Bonnie Raitt’s

poignant “I Can’t Make You Love Me”, which for me caught Ms. Wilson a bit out of her element.
On “Day in Day Out” Ms Wilson’s voice was strong and spunky provoking memories of her ability to work fronting a big band as she once did with the Dizzy Gillespie All Star Big Band on this number.
A duo on “Blame it on My Youth”, with bassist John B. Williams using his upright electric bass, featured a playful interchange, as Williams penchant for sliding bass lines seem to put a smile of Ms. Wilson’s face.

Ms. Wilson made it a point of telling the audience that her rhythm section band members had been with her for at least the last twenty years, quipping with a wink that “…she knew how to hold ‘em, and she didn’t mean poker.”  She is the consummate entertainer and on her next number “Guess Who I Saw Today”, a song she first recorded on her Capitol record Something Wonderful

, she becomes the master storyteller. A sly song of deception, infidelity and discovery, she sings the lyrics with a telling feigned naivete that pulls the listener into the scene she creates with her fetching vocals.

On the final three songs “How Long Has this Been Going On”, “Teach Me Tonight”( a request that she did with some trepidation)  and “If I Could” her voice was surprisingly elastic, and wonderfully controlled, despite some loss of range. She creates urgency without ever breaking into a screech, knowing full well her own limitations, with Mr. Mathews obligingly lowering the key to accommodate her range when she deemed necessary.I was somewhat disappointed that she didn't sing my personal favorite "Save Your Love for Me" from the seminal album with Julian "Cannonball" Adderley.

Nevertheless  the show was superb.If there were any doubts as to Ms. Wilson’s vitality and her ability to enthrall her audiences, they were put to rest on Sunday at BB King’s.One look at the line of gentlemen fans that waited for a chance to talk to her or get her autograph at the end of the show left little doubt about her retained popularity. She remains one of the most engaging performers, a true treasure and her return to New York after so many years was nothing short of triumphant.
Posted by Ralph A. Miriello at 2:41 PM