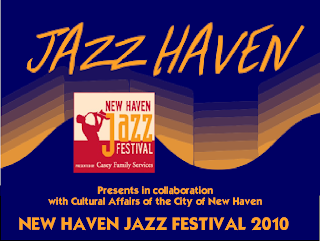 The end of summer is always hectic and I find myself knee deep in things that I should have already written about. The free jazz concerts that are offered almost every summer in New Haven, on the beautiful New Haven Green, are amongst the most enjoyable jazz events of the year in the Connecticut area. So if its not too late, here is a brief summary of the last concert in that series that took place on Saturday August 21, 2010. 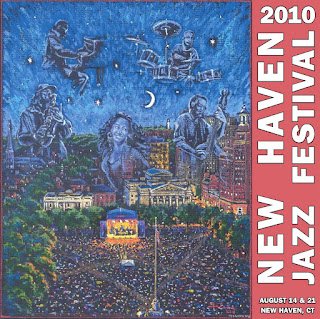 This particular show was a homecoming of sorts, featuring some sons of Connecticut playing for the local crowd. The Jackie McClean Youth Jazz Orchestra led off the evening's performance and  although I didn't catch them, by all reports the group was impressive and started the audience off swinging.

Guitarist turned Bassist Joe Morris hails from the area and his fine quartet featured his quick walking bass lines accented by the percussive piano of Mathew Shipp the meandering alto of Jim Harris and the pulsating drums of Gerald Cleaver. I only caught the last two songs of the Morris set, but both were tight, high energy,  free jazz improvisations that were quick paced and rhythmically driven. The music is clearly influenced by the free improvisational style and spirit of Ornette Coleman.


The trombonist Steve Davis brought his quintet to the green that included the venerable Larry Willis on piano, Steve’s sonorous trombone, Mike DeRubio’s alto, local educator Nat Reeves on bass and the buoyant drummer Willie Jones III. In contrast to the more free style of Joe Morris's group, Davis played in a straight ahead manner. They started the set with a stirring rendition of “Surrey with the Fringe on Top”. Larry Willis opened off the next song with a beautiful interlude from “Nature Boy” leading into his own tender ballad “To Wisdom The Prize”. Willis is one of those veteran pianists whose mere presence  gives any performance instant credibility. He adds a touch of warm lyricism to whatever he does. Davis’s trombone has a buttery tone that was complimented nicely by DeRubio’s alto. The group did a particularly moving take on the classic “Milestones” toward the end of their set.

The Chilean songstress Claudia Acuna brought her Andean inspired vocals to the New Haven Green in a particularly moving performance. She was joined by a group of young, energetic Latin musicians on electric guitar, bass and drums. They played with a rock music like sensibility at times, interspersing slide guitar awkwardly into the mix. Her music spoke of things worldly and things spiritual, as her clarion voice evoked bird-like sounds of lush forests from South America. She touched on themes of class oppression in her country. On one song she brought us into her Andean Indian ancestry, lamenting on the spirituality of tobacco in Indian culture. Acuna is one of those rare performers who can transport you into her world. She has a beautiful voice-it is a gift and she uses it well. 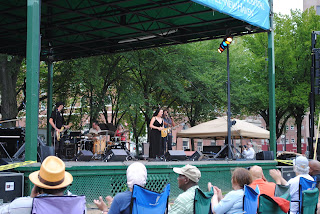 This group cooked, playing tight post bop jazz in a direct and exciting way. They started the set with Ameen’s “Swift Boating” a tune that recalled the John Kerry smear campaign. The second song was Joe Farrell’s “Sound Dance’' and featured some brilliant interplay between Herwig on trombone and Franceschini. on flute, with Ameen ridding his cowbell hard. Herwig was impressive with his fluidity and tone and Beasley showed why he is an in demand session player on the west coast. The front line of Franceschini.and Herwig was tight and agile as it went through its serpentine paces flawlessly, with Amin and Goines keeping them all on track.

This year’s New Haven Jazz festival was indeed a homecoming of sorts that proved that Connecticut has spawned some great jazz musicians of its own and that it will continue to do so for the foreseeable future. This wonderful free event is a representation of the expansive and inclusive nature of jazz music. In stark contrast to some audiences that I have witnessed, this event brought together a diversified group of fans from all walks of life. They peacefully and respectfully enjoyed America’s indigenous art form- jazz in a beautiful open air setting and all for free! What could be better? Hats off to the City of New Haven and the Casey Foundation for continuing to foster such a great event.
Posted by Ralph A. Miriello at 2:47 PM