Cuban born drummer Dafnis Prieto has established himself as an artist who commands an amazing array of poly tonal techniques. He plays all across his drum kit in a whirlwind of cyclonic energy. He is a vortex of percussive ideas from which the rest of this beguiling music magically emerges.
With his “Absolute Quintet”

he assembles a unique grouping of musical voices with which to paint his sonic landscape. The instrumentation is unusual and features two string players, Christian Howes on violins and Dana Leong on cello, the piano and Hammond B-3 magic of Jason Lindner and the multiple saxophone voices of Yosavany Terry, with a guest appearance by Henry Threadgill on alto. Clearly the music is not melody driven, but neither is it devoid of melody, it just approaches it from another direction and therein lays Prieto’s gift. With his “Absolute Quintet” he has found like-minded musicians that not only share his rhythmic approach but revel in it.
Prieto’s diversity of sounds is apparent from the start on “The Coolest” he and keyboard artist Lindner do their best imitation of east Indian inspired Kokayi singing somehow weaving it in the clave driven beat.
On “Sensaciones” it is the sound of Howes violin and Leong’s cello mixed with the electric keyboard of Linder that creates this airy piece. Terry’s soprano saxophone takes flight nicely as Prieto fills in with his orchestral sound.
“The Stutterer”, with its purposefully repeating rhythmic pattern, is started out with the percussive piano chording of Lindner, a strong kick beat from Prieto and some edgy alto by Terry. The strings are played  staccato as Terry builds his searing alto solo over a cacophony of rhythmic jags, making for an intensely frenetic musical journey.

On the most romantic melody of the album “Afrotango”, Henry Threadgill’s  probing alto is featured as the lead instrument, backed by some pizzicato string playing by Howes and Leong and some deft Hammond B3 playing by Lindner. The tune has the romantic undertones of the Tango, but Prieto’s penchant for multiple time changes and Lindner’s organ bring it somewhere into the realm of tango fusion. 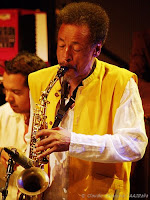 The album takes a distinctively chamber music like turn with Prieto’s “One Day Suite”. It is a three part orchestrated movement representational of the three parts of a day, Morning, Afternoon and Night.
The ten-minute "Morning" movement is the most ambitious, with the unique instrumentation of organ, violins and cellos working nicely to create the serene musical mood. Despite the lack of a bass, there is a clearly defined bottom maintained by Prieto, Lindner and Leong. Howes Indian inspired plucking, alternating with his muted bowing gives the music an definitive east meets west feel. Awakening is represented beautifully by the rising soprano of Terry, which leads into a masterful display of poly tonal creativity by Prieto. 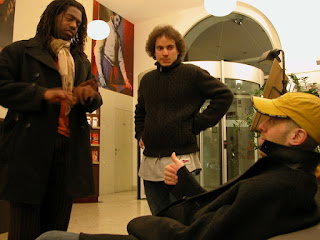 On “Afternoon” Lindner’s acoustic piano, Howes bass violin and Leong’s Cello blend beautifully in this semi-chamber music piece that has no pretense of rhythm. This yields to the changing rhythmic environment that Prieto inevitably brings to bear in “Night” .  The ostinato plucking of Howes violin carries this rhythm for the most part. Lindner’s piano musings delicately hammer their way into foreground only to fade away again to Howe’s plucking violin and Prieto’s drum kit. 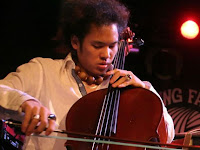 “New Elephant” starts out with a drone from Linder’s keyboards, setting the bottom as Prieto’s creates a series of rhythmic patterns that never seem to repeat. Howes and Leong play long drawn out lines on their strings, which combined with Terry’s alto simulate the loping gait of the large mammal. Lindner plays a repeated key on the piano in the background as Terry and Prieto play in a bizarre unison that ends abruptly. 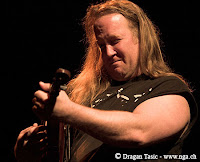 “Renew the Elephant” features some wonderful solo drum work by Prieto at the intro, which leads into mix of sounds that give the tune a clave crossed with fusion feel. Lindner ends the tune with a keyboard riff that comes straight from the soundtrack of a  TV detective show.
The “Innocent Bird” is the most confusing piece on the album. It starts out as a flight of fancy for Howes as he bows his way over the repeated rhythmic lines of Prieto and Lindner, until they break into this fairytale like melody that seems strangely out of place.  When Linder enters on the B3, the tune takes on a distinctively rock-blues sound that seems to come out of nowhere.


This album has been around since 2006, but after recently getting a chance to really listen to it , I found the music for the most part is fresh, vibrant and compellingly original.