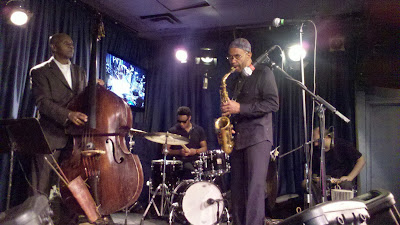 At fifty years old, the saxophonist Kenny Garrett has definitively come into his own. Despite forever being associated with Miles Davis, where he spent five years with the iconoclast trumpeter from 1986 through 1991, he is only credited on one Davis album “Amandla” from 1989.  It is time to evaluate the fine saxophonist on his own merits and not on his past associations, no matter how storied they may be. 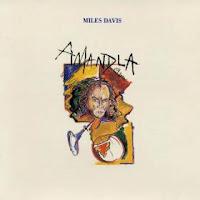 On this evening of celebration, Garrett who was celebrating his fiftieth birthday that night at the Iridium, rose to the occasion with a level of maturity and intensity that mesmerized the partisan audience.  Joined by the astute
Nat Reeves on bass, the irascible Benito Gonzalez on piano  the muscular drumming of Ronald Bruner Jr, and the subtle accents of Brazilian percussionist Rogerio Boccato, Garrett went through a repertoire mostly culled from his “Beyond the Wall”

cd from 2006. He and his fellow musicians were using this gig as preparation for an upcoming tour of China.

The atmosphere was expectant as Garrett and company took the stage. They started the set with "Calling” a Coltrane-like homage, reminiscent of the master’s clarion piece “A Love Supreme”. With Gonzalez’ heavy chordal piano work setting the ostinato mode over Reeves repeating bass line and the punishing drumming of Bruner, Garrett gave us a glimpse of what it might have been like to have watched Coltrane in one of his seminal, trance-like explorational sessions. Garrett’s searing alto builds to ever increasing intensity, over the steady rhythmic background. The bell of his horn pours out an explosion of cascading notes, delivered at a frenzied pace, each note clearly articulated. He has mastered the idiom. 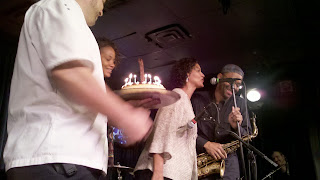 On “Beyond the Wall” we are treated to a hard bop, carpeting vamp from pianist Gonzalez, who is clearly from the lineage of  McCoy Tyner.  Nat Reeves is a pleasure to watch. He plays his upright bass at a frenzied pace with an almost straight-jacketed posture. All the while he has a joyful composure, as his fingers move up and down the fret board with astonishing speed and nimbleness, while the beads of sweat pour down his face. The sun glassed Bruner plays with such pounding intensity you think he is going to put one of his sticks right through the skins of his drum set. His attack is probably the hardest I have ever witnessed and a bit more than I think is required, but there is no doubt that he drives Garrett to new heights with his hard driving intensity. Mr. Garrett, as Howard Mandel once wrote for Downbeat, is a "righteously devoted musician working toward a purpose somewhat higher than mere entertainment,". I witnessed the trance-like state he achieved during one of his solos where he played his alto in a Middle Eastern motif that was absolutely hypnotic. 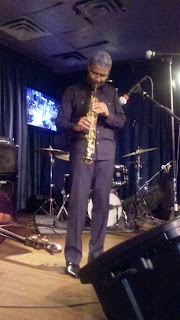 When soloing Mr. Garrett rocks back and forth with his horn in a manner that looks and feels like the motion often exhibited by religious zealots as they reach a state of enlightened euphoria. It is this quest to achieve enlightenment through his music that earmarks his music, much as it did Mr.Coltrane’s before him.  He can wail with an earnest purity in the higher registers, with the influence of Pharoah Sanders, another galactic traveler, most apparent.
Despite these powerful influences, Garrett has expanded his musical vision well beyond these, his formidable predecessors. He has incorporated elements of soul, funk and hip-hop into his repertoire with no preconceived notion as to their hierarchical value. His ending rap on a vamp based on Herbie Hancock’s “Chameleon”, showcased some piano work by hip-hop producer Carlos McKinney and offered Mr. Bruner a chance to show off his funky side.

About midway through the first set Mr. Garrett introduced Wang Guowei, who is a master of the two-stringed Chinese instrument the erhu.


On “Tsunami”, a delicate ballad that mixes Americana influences with Asian sounds, Mr. Garrett went to the piano and Nathan Webb took over the drum kit. The ehru emits a sorrowful sound that is strangely emotive and under the skilled hands of Mr. Guowei it was like being transported to an intimate venue in mainland China. Mr. Webb’s skillful and delicate touch was in perfect harmony with this sensitive music. Garrett’s skill at composing such a unique piece of music with its’ Asian influence bespeaks highly of the many facets of this talented musician. 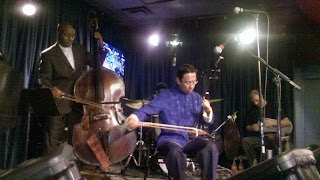 The saxophonist did a marvelous duet with the gospel pianist John Mercier on the classic from the Billie Holiday songbook,  “ We’ll Be Together Again”. Mr. Garrett has a firm understanding of the tradition of this music and in this most beautiful rendition he evoked the tonal elegance of Johnny Hodges, as Mr. Mercier gently accompanied unobtrusively behind him.  On the second set, Garrett was joined by the pianist Mulgrew Miller for this song> D driven by the more exploratory Mr. Mulgrew, Mr. Garrett’s horn took on a more searching less honeyed tone. The two pianists, Mr. Gonsalez and Mr. Mercier, watched in awe from the sidelines, as Mr. Mulgrew’s worked his magic.

At fifty years of age, Kenny Garrett has arrived at a point in his career where he is a legitimate heir to the throne of those saxophone colossals who have come before him. If you haven’t had the opportunity to see him first hand you owe it to yourself to experience this powerful and expansive player.
Musicians: Kenny Garrett (alto and soprano saxophone, piano ); Nat Reeves (bass); Benito Gonzalez (piano); Ronald Bruner ( drums); Rogerio Boccato (percussion);  with special guests Wong Guowei (ehru) ;Johnny Mercier ( piano) Carlos McKinney (piano); Nathan Webb (drums); and Mulgrew Miller (piano).