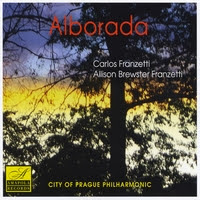 Argentinean born Carlos Franzetti is a man of many talents. He is a superb pianist, as well as an accomplished composer and a brilliant conductor /arranger. He possesses the rare ability to bridge the divide between classical music, film scoring and contemporary jazz improvisation.

Franzetti may not be a well known name to the jazz  world, but he has collaborated  with the firebrand tenor saxophonist  Gato Barbieri, trumpeter
Jon Faddis, soprano saxophonist Paquito d’Rivera, bassist Eddie Gomez and the pianist Steve Kuhn.  My first experience with his artistry was his wonderful orchestral arrangements of Kuhn’s compositions on the pianist’s fine release “Promises Kept”

On his latest effort “Alborada” he and his co-conspirator, wife and fellow pianist Allison Brewster Franzetti have created an album that is sure to please aficionados of all those disparate genres. Skillfully employing the abundant resources of the accomplished

Prague Philharmonic Orchestra, Franzetti has created a wonderfully, lush and verdant compilation of delightfully diverse compositions that will simply enchant you for the entirety of its forty-two minute playing time.
Each song represents an influence on the composer. The opening track titled “Mombasa” is homage to fellow countryman Gabriel Garcia Marquez and is a reference to the African city that was the background for the author’s novel “One Hundred Years of Solitude”.

The music is appropriately cinematic in its feel.

“Iluminata” is a dedication to his wife Allison Brewster Franzetti as well as a homage to the French composer Henri Dutilleux, The bellowing bassoons and dancing woodwinds create another impressionistic setting for enchanting piano improvisations by Ms. Franzetti, as the maestro brilliantly intersperses percussive accents with strings and bass to create a apparition of textures and colors.

My personal favorite on the album is the inspired “Mirage” with its fusion-esque drive, its refined funk and its effective use of Fender Rhodes. Franzetti was obviously touched by the electronic foray of jazz into fusion and this is his current gesture towards that era, an era that he participated in his 1970 album "Grafitti"

“Pasacaglia” is perhaps the most classical, least  “crossover’ of the nine compositions on the album. Ms. Franzetti is most at home on this processional inspired piece with her lithe piano solo work.
“Iguazu” refers to Argentina’s treasured Iguazu Falls.  Franzetti’s piano work undulates, one imagines, emulating the endless stream of water as it flows in continuous cascades from the upper parapets of this majestic  falls.

The ballad “ Song Without Words” is a showcase of Franzetti the jazz pianist, as he explores the jazz piano trio format with bassist Robert Balzaar and drummer Jiri Holzer. Franzetti's  arrangement of the strings and orchestra is in counterpoint to the playing of the jazz trio, not simply an added embellishment.
“Aborada” features the fine piano solo work of Allison Brewster Franzetti in a piece that is inspired by Ravel’s “Concerto in G”. Starting off as a neo-classical piece, Ms. Franzetti’s piano dances through this section in elegant precision, as the strings punctuate the changes. In the middle of the composition the pace turns into a jazz waltz, where Ms. Franzetti’s fluidity and improvisational adeptness seems to struggle a bit.
“Serenata” is a Latin American inspired composition. It successfully bridges the fire of South American musical influences with the elements of western classical music. Ms. Franzetti ‘s playing here is stirring and impassioned.

The finale is a dedication to the Brazilian singer/composer Milton Nascimento titled “For Ever Milton”. Mr. Franzetti sits back at the piano for this splendid uplifting homage. The maestro’s inspired piano solo work is complimented by his skillful use of strings and woodwinds to elicit a full range of emotions. What a joyful exclamation!
Musicians: Carlos Franzetti (piano, composer and conductor); Allison Brewster Franzetti (piano); Robert Balzar ( bass) ; Jiri Holzer (drums), the City of Prague Orchestra.