Ted Rosenthal and his trio at the Watercolor Café in Larchmont, NY. February 17, 2012 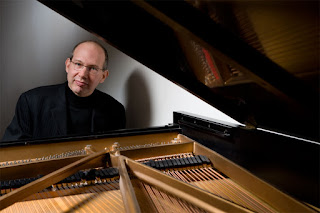 I am always surprised at the dearth of good places to sit and enjoy first hand “live” jazz in the lower Westchester or Fairfield County, Connecticut area. For such a wealthy area with an art conscious community it has surprisingly few places that feature any live music let alone live jazz.

Perhaps it’s the proximity to New York City, with its plethora of clubs to choose from and its draw of world-class talent that inhibits entrepreneurs from venturing more boldly into providing local venues. There are certainly enough technically proficient musicians, pouring out of today’s music schools, looking for more gigs to play. Besides the obvious need to make a living, professional musicians need the necessary feedback that can only come from performing in front of an audience. So the precious few local places that do present the music are like delicate seedlings that need to be nurtured by our continued patronage.

This past Friday evening I made my way to one such local restaurant that has made a substantial commitment to live music and occasionally to jazz. The Watercolor Café, in Larchmont, is an intimate restaurant with a small bar positioned to the right of the entrance and a compact stage, squeezed into the left, that somehow manages to fit a piano, bass and drums in its limited confines. Owner Bruce Carroll has been presenting music since 2000. Sometimes he features folk or singer songwriter acts, occasionally jazz trios or quartets. On a recent Friday the Watercolor Café featured the talented pianist Ted Rosenthal and his trio.

Ted is a regular at the Café, an immensely talented player whom I first saw in the piano chair playing as a member of the Westchester Jazz Orchestra. His recent album Out of this World was one of my top picks for 2011 and is a must have for anyone who covets good piano jazz. On this evening his trio was made up of his longtime collaborator Noriko Ueda on bass and the young drummer Jason Berger. 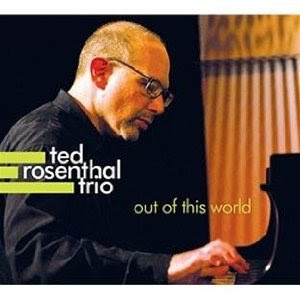 I arrived halfway into the first set. The restaurant was fairly full with patrons enjoying dinner as I made my way to an empty seat at the bar. The trio was playing what sounded like a interesting version of Van Heusen/Delange standard “Darn That Dream.”

Rosenthal moved quickly to the Cole Porter classic “ I Get a Kick Out of You”. The arrangement was sprightly, with a theatrical feel to it. Rosenthal demonstrated his impressive fluency, effortlessly cascading up and down the keyboard of the house upright piano. Noriko Ueda’s dancing fingers played an equally spirited bass solo. Drummer Jason Berger colored the song with his judicious use of cymbals and traps. The only negative was a foursome of people who seemed oblivious to the generally implied “quiet during the music” rule. These morons kept babbling endlessly to the dismay of other patrons around and at times to the distraction of the musicians themselves. Some people live in their own special bubble.

The trio turned to a blues for the next piece, a Horace Silver composition titled “Strollin.” Rosenthal can be a stylistically romantic player. Occasionally he alternates his delicate, floating crescendos with deliberate block chording that lends a full sound to his playing. On this tune there was a nice call and response interplay between Rosenthal and Berger. Despite the drummer’s apparent youth, Berger showed some wise subtlety in his playing recognizing the limits of bombast that would be appropriate for this compact venue.

No set of piano jazz would be complete without a Monk tune and Rosenthal chose the perennial favorite “Well, You Needn’t” which the trio played in a double-time that was pulse quickening. Rosenthal is steeped in the tradition but with a wonderfully creative edge to his playing that always keeps you guessing where he’s heading next. The group used dynamics to great effect, allowing the music to ebb and flow, swell and compress at just the right times and to the delight of the crowd. Rosenthal isn’t inclined to Monk’s dissonance, but his interpretation didn’t suffer from its absence.

After a brief intermission the trio returned for the second set with the title song to Ted’s recent album “Out of This World”. Ted crafted the Mercer/Arlen song with an odd meter treatment that features Ueda’s ostinato bass line. The classic is reinvigorated by the syncopated beat and by Rosenthal’s joie de vive, as he spins endless magical ideas out of well-worn melody lines, at times briefly paying homage to Brubeck’s “Blue Rondo a la Turk” in the mix.

A stirring rendition of the Rodgers and Hart “Have you Met Miss Jones” left you tapping your feet in double time as Rosenthal created cascades of rippling piano lines over the melody. Ueda and Berger kept the pace flawlessly.

Gershwin’s “Embraceable You” featured some nice walking bass lines by Ueda. A rambling upbeat version of Johnny Mandel’s beautiful “Emily” had Rosenthal’s arrangement hinting at what sounded like something from the great Nelson Riddle playbook.

After a soulful, bluesy inspired version of Chopin’s “Nocturne in F Minor,” the trio ended the evening’s performance with another tune from Thelonious Monk’s songbook “Rhythm a Ning” performed in a quick paced, adrenaline-infused manner that pumped both the audience and the musicians, ending in rousing applause at the finale.

Ted Rosenthal is an exciting, inventive player steeped in the tradition of the great American songbook, who has found his own path to reinvigorating this timeless and familiar music in creative and unfamiliar ways. Catch him live if you can.