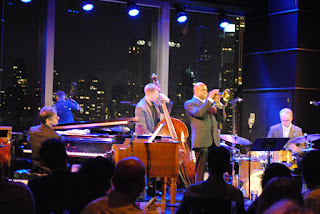 On a cool, crystal clear Saturday evening in New York, the eclectic drummer Matt Wilson and his quartet were scheduled to play three sets, part of a multi-night series celebrating the release of his latest cd An Attitude for Gratitude. Having previewed the album, I was anxious to see this talented group perform this mostly ebullient music live. The Arts and Crafts quartet, as it is so named, consists of the polished master trumpeter Terrell Stafford, the fine contra bassist Martin Wind and the multi-keyboard player Gary Versace, a triple threat on piano, Hammond B3 organ and accordion. It is the
energetic and joyful Wilson, with his infectious smile, his call out encouragement and his toy box of percussive magic that makes it so special. 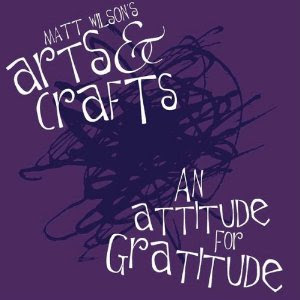 On this evening I got to sit in for the last few numbers of the first set and all of the second set. Dizzy’s is a world-class venue that seats about 150 patrons at both tables and on stools that line both the perimeter as well as the bar. With a generous stage that backs up to a glass wall featuring the sparkling Manhattan skyline as its background, Dizzy’s is clearly one of the most spectacular settings to see world-class jazz.
Toward the end of the first set the quartet was playing a rousing version of the Nat Adderly song “Little Boy With the Sad Eyes.” With the rhythm section of Wind and Wilson leading the charge on drums and bass, Versace pulsed out the melody line on the B3, and Terrell Stafford showed why he is such a powerful force on the trumpet. After the group whipped the audience into a frenzy, Wilson took to the microphone to explain the special significance of the next song that would close the first set. “There’s No You” was dedicated to the group’s founding bassist, the late Dennis Irwin, who passed away in 2008 from cancer. The stage was left to Stafford to play the moving ballad acappella as he does on the album. The veteran is capable of creating great pathos with his horn and here he had the audience mesmerized as his soulful rendition reminded us about how moving a solo trumpet can be in the right hands.

The second set started out with a playful Monk tune
“We See” and featured a Stafford solo that eked out notes in the high register with extraordinary ease. Versace, this time on piano, is a talented player who has a penchant for using space brilliantly, playing sparingly between the beat.

Anytime you look at Wilson all can see is an endearing, child-like countenance that is infectiously joyous, all the while keeping impeccable time and offering a myriad of percussive ideas. His enthusiasm is expressed in both his playing and in his constant encouragement that he offers to his fellow musicians on stage. It is no wonder that the album has a generally feel good vibe that is indicative of musicians enjoying both the music that they are playing and their fellow musicians.

The normally cheerful “Happy Days Are Hear Again” was played in moody, melancholy almost dirge-like way. Stafford took to the more warm-toned flugelhorn for this one, as Versace delicately accompanied behind the expressive horn. When the pianist did solo, he would lay back for two or three measures at a time before adding notes sparingly, letting Wilson and Wind carry the slow empty beat for emphasis.

Wilson started the next tune, his composition “Bubbles,” with his own version of a clinic on using brushes, impressively creating a circular rhythmic pattern over his traps. Versace switched to accordion and he and Stafford played in unison the almost circus-like sounds. When Stafford soloed, he interspersed bits of “Let’s Fall In Love” to his cascading solo, as Wilson played bombastically behind him. When it was Versace’s turn to solo on accordion he and Wilson created a fascinatingly playful duet of calliope-like sounds combined with Wilson’s creative use of his sticks. A soulful solo by Wind on his contra bass featured skillful tremolo effects. At end of the piece Wilson stood and recited words inspired from a Carl Sandburg poem. “Two bubbles found they had rainbows on their curves, and they flickered out saying ‘you know cats it was worth being a bubble just to have held that rainbow for thirty seconds'.”

The evening took a surprising turn when the singer Kurt Elling showed up for the second set. The band played a song that Wilson and Elling had previously recorded sometime ago, culled from the drummer Tony William’s repertoire “There Comes a Time.” It was a special treat as Mr. Stafford seem to be urged onto to new heights with the addition of Mr. Elling’s sonorous baritone. Versace’s rotating Leslie speaker bellowed out modulating organ chords. Wilson flailed on his drums, Wind kept pace on bass and Mr. Elling stretched the seeming limits of his vocal range. He controlled his voice with amazing precision. Parrying back and forth with the likes of Mr. Stafford’s trumpet was no easy feat but Mr. Elling proved he was more than up for the task. It was easily the unexpected highlight of the evening 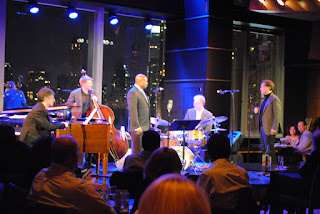 After that gymnastic workout, the group gave Mr. Elling a bit of a break allowing him to sing the ballad “Embraceable You.” It was a real treat to hear the man’s wonderful baritone interpret the classic and it once again inspired Mr. Stafford to play one of his most stirring solos of the evening, a New Orleans’ tinged mini masterpiece. As can only happen in New York, the audience had just witnessed one of those rare moments in jazz where the stars align.

The set concluded with the Jaco Pastorius burner from the Heavy Weather album, “Teen Town,” which is also on the latest album. Bassist Martin Wind had to play the formidable bass line on his contra bass, which he did flawlessly. Versace’s organ started off the melody line and then Stafford’s trumpet mimicked the same line in unison. When Versace got a chance to let loose on the B3 it was a joy to behold, he can make that monster swell and swoon. Stafford took it to another level and Wilson pounded his traps relentlessly, shouting encouragement and smiling broadly throughout.

The audience left knowing they had been privileged to one of those rare great nights of music.