Pete Malinverni Trio: "Heaven" The Spiritual Side of Jazz 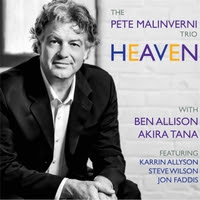 I have had the pleasure of meeting pianist Pete Malinverni, and the fortune to have seen him perform his pianistic magic in some intimate and spiritual settings on several occasions. Malinverni is a thoughtful, serene man who brings a deep and abiding sense of reverence to his playing. He has been steeped in religious music for decades, with tenures as the musical director of the Devoe Street Baptist Church in Brooklyn, NY, the Westchester Reform Temple in Scarsdale, NY and the Pound Ridge Community Church in Pound Ridge, NY- where I went to several Sunday services just to see him play. He is also a eminent educator and currently is an assistant professor of jazz studies at SUNY Purchase. Pete was kind enough to entertain an interview for my blog back in 2013, which for those who are interested can be found here.

Make no mistake about it, Malinverni can swing, having played in trios with iconic drummer Mel Lewis and with Amhad Jamal drummer Vernel Fourier among others. His music has a naked honesty that sweeps you up in its sincerity and emotional content.

On his latest release Heaven, Malinverni is joined by eclectic bassist Ben Allison and journeyman drummer Akira Tana.  Together these three make some beautiful and sensitive music. Not surprisingly, the album has a spiritual theme and explores two compositions from Duke Ellington, the title tune “Heaven” and “Come Sunday”; four traditional songs that have an enduring messages of hope and faith; two obscure gems a gorgeous arrangement of a song by Hannah Senesh titled “Eili, Eili” and an Ungar/ Mason composition “Ashokan Farewell;” the uplifting, gospel influenced Curtis Mayfield tune “People Get Ready” and one of Malinverni’s own “Psalm 23.”

“Heaven” is a swinging straight ahead rendering that features Malinverni’s fluid, sometimes Monkish, piano lines, Allison’s pulsing bass and Tana’s light comping. Allison and Tana each offer brief but potent solo work here, before the group returns to the melody line at the coda.

Malinverni’s “Psalm 23,” is based on the famous Biblical passage from David that starts with “The Lord is my Sheperd, I shall not want…” He uses a reverent musical treatment to portray a spiritual that acknowledges God’s grace and guidance given to his people even when they “….walk through the valley of darkness..” The pianist creates a delicate musical monologue that mimics the verse- each challenge met with faith in the higher being- and then he builds the musical tension to a tempest with a rumble created by the trio, until he resolves it to a peaceful conclusion at the coda.

The bubbling “Down in the River to Pray” is given a buoyant 5/4 bounce with Allison’s pulsing bass line holding down the beat with Tana’s rim and cymbals, as Malinverni explores around the melody.

“Shenandoah” is given a sparse treatment, with vocalist Karrin Allyson lending her clear, light voice to Allison’s bass and Malinverni’s accompanying piano. Allison and Malinverni both take short probing solos before Allyson, whose vocal could bring a bit more emotional content to this song, returns to finish up this endearing American folk song.

“Eili, Eili” is a composition I ‘ve never heard before, apparently based on a poem written by a Hungarian woman, a Jew who fought the Nazi’s in WWII and died trying to save concentration camp prisoners. True to the feeling of the poem, Malinverni and Allison do a marvelous job of making this one of the most moving pieces on the album. The pianist is at his most emotive here and bassist Allison’s plump lines are in beautiful counterpoint to the piano and to Tana’s masterful brushwork.

The lyrics of Curtis Mayfield’s “People, Get Ready” have an uplifting message to an oppressed people and Malinverni deftly finds an elevating experience in this enduring melody, which he and bandmates play with great spirit and elation.

Ellington’s “Come Sunday” is a gorgeous composition that embodies the maestro’s sense of what is spiritual. Guest Jon Faddis’s longing trumpet solo is a case in point. There is a poignancy to his slurring, voice-like horn, a human cry that transcends formalized religious context and unifies us all no matter what our beliefs. The trio expertly backs Faddis exemplary playing of this gem and there is no way one can’t come away from this unmoved.

Another traditional song “A City Called Heaven” features a moving bass solo by Allison at the opening. The bassist has a tremendous feel for this music and it shows here. His tone is clear, his attack is clean and his ideas seem in line with the pianist’s own inclinations-warm, sensitive and uncluttered.

Alto saxophonist Steve Wilson is about as in demand as anyone on the scene today. On “Wade in the Water,” a song made popular by Ramsey Lewis, Malinverni plays a darting solo that floats above his rhythm sections steady pulse. Wilson’s angular alto brings some swinging bop to this one, and he and Malinverni play off each other effectively for a brief section before returning to the head.

The final song on the album is “Ashokan Farewell” a song made famous as the theme to documentary filmmaker Ken Burns “Civil War” series on PBS. The funny thing is despite its melancholy, old-worldish sound, it wasn’t written until 1982 and by a man from the Bronx.

Notwithstanding the origins of this song- which is based on a Scottish lament- it has been heard by millions and construed to be a part of Americana folk music. Malinverni finds, as many of us do,that the song has a spiritual core to its tender, moving theme. He plays this as a sauntering slow waltz and it seems like the perfect tune to end this album of music on.

You can hear "Heaven"  here : https://soundcloud.com/bk-music-pr/heaven-pete-malinverni
Posted by Ralph A. Miriello at 2:56 PM