First and foremost I want to say how impressed I have been with the quality of offerings that I have had the chance to preview this year. Most of these selections come from musicians that fly far under the radar of the general listening public. Admittedly there are many fine albums, many by more established artists, that I have not had the opportunity to listen to or review. Consequently my list in no way attempts to represent a very best of 2009 but simply the best that I have had a chance to hear. With that caveat firmly established here are some of my favorite cds from this year.

PART ONE:
My Top Five Piano Based CD’s

Exquisitely recorded by Ken Christianson, this album awakened my consciousness to the beauty of the playing of pianist Lawrence Hobgood. The under appreciated Hobgood has for years been successfully accompanying and arranging with vocalist Kurt Elling, who joins him brilliantly on three songs on this album First Song, Stairway to the Stars & Daydream. His poignant collaboration with the noble, warm bass of Charlie Haden is notable especially on Que Sera Sera, When the Heart Dances, Why Did I Choose You, New Orleans & The Cost of Living. His unaccompanied piano plays like a reverential benediction on his own compositions, Sanctuary & Leatherwood. A fine album from a pianist who we hope to hear more from in the near future.

Pianist Marc Copland has had a prolific year with several releases that all merit close attention. My favorite, this year, showcased the brilliant and sensitive Copland with a powerful trio made up of the buoyant Drew Gress on bass and the ubiquitous Bill Stewart on drums. There is a wonderful exhibition of subdued introspection-ala Bill Evans-on Copland’s three solo deconstructions of the touching Johnny Mandell song Emily. His treatment of the Julie Styne standard I Fall In Love Too Easily is equally moving. The eruptive force of Stewart’s drums and Gress’s elastic bass are perfect foils to Copland’s probing piano musings. On Gress’s Like it Never Was the interaction is moving and spookily telepathic. The album features three Copland compositions the somnambulistic "The Bell Tolls" along with the title tune "Night Whispers", and his visual "Scattered Leaves". An unusual take on the familiar Miles Davis classic "So What" is icing on this cake. 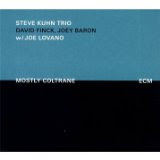 In celebration of a brief collaboration between Kuhn and saxophone titan John Coltrane back in 1960, pianist Kuhn has offered an inspiring album of rare warmth and elegance.The pianist carefully chooses a series of Coltrane tunes that are more in line with his own melodic sensibilities including Welcome, Song of Praise, Living Space, Central Park West, Configuration, Jimmy’s Mode and Spiritual.
The tenor saxophonist Joe Lovano, channels the spirit more than emulates the sound of Coltrane, and is featured on several compositions. Lovano is in top form and he and Kuhn can be especially poignant in their interplay.The rhythm section of David Finck on bass and Joey Baron on drums play with a respectful yet powerful energy. Kuhn’s ability to wretch emotion from his keyboard is touching on Crescent. On the free flowing treatment of Like Sonny, the entire group achieves a truly remarkable flow of oneness. Kuhn takes another run at his own composition Trance from his 1975 album of the same name. This time around he chooses to play the ostinato based melody solo. He delves more deeply into the nuances that he can produce from its core theme rather than concentrating on the driving, rhythmic nature of the original song. An interesting retrospective look at a song that I always found compelling. Kuhn is a treasure and with this album he has re-established himself as someone who is still at the top of his game. 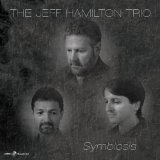 I know, I know the Jeff Hamilton Trio is lead by the very talented drummer Jeff Hamilton, nonetheless with Chris Luty on bass and the marvelous piano of Tamir Hendelman, it makes my top five of piano based Cd’s for 2009. This album swings on songs like You Make Me Feel So Young or Fascinating Rhythm . The music can also pull at your heartstrings, like when Hamilton’s wellspring of ideas on drums spurs on Hendelman to pianistic magic on Midnight Sun. Luty’s inspired arco bass work and Hamilton’s airy brush strokes, on the somber Claus Ogerman composition Symbiosis is perfect for the pensive, classically inspired piano of Hendelman. Blues for Junior and Blues in the Night are straight ahead blues with no excuses. A pleasurable musical experience throughout. 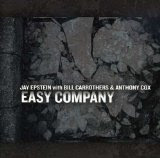 I am sure this is not everybody’s cup of tea, but I enjoyed Easy Company a great deal. With unusual choices in material like the John Williams composed Star Wars inspired Imperial March to a hip treatment of the Cream classic White Room, Messers Epstein, Carothers and Cox stir up a convincing pot of piano based trio music that is surprisingly fresh. No two treatments are alike and the trio manages to push each other along to unexpected heights and around blind corners without any deleterious effects. Check out the emotionally evocative treatment by Cox on bass and Carothers on piano on Never Let Me Go. Carothers is an interesting, restless soul of a pianist who is hard to pigeonhole. Epstein and Cox are equally creative with something to say. They truly make for Easy Company. The entire album has the raw feel of a garage band recording where the musicians are serious about their craft but are having fun, prodding each other on and seeing where it takes them. It’s a fascinating ride that is worth the trip.
Posted by Ralph A. Miriello at 7:16 PM