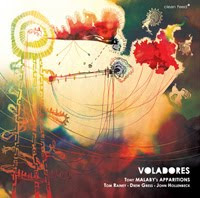 Tony Malaby has gained notoriety as an avant-garde saxophonist who has daringly utilized multiple palettes of instrumentation to achieve the sound that he wishes to explore. This quest has made for some interesting pairings with artists such as guitarist Ben Monder, drummers Michael Sarin and Nasheet Waits, tuba player Marcus Rojas and cellist Fred Lonberg Holm. In each instance Malaby seems to breathe fresh inspiration from the wellspring of sounds these various stylists can bring to his musical table.

The Cornelia Street Café is a little gem of a club on Cornelia Street off Bleeker in the West Village, NYC. I had not been there in sometime but was familiar with the narrow lower level and the comfortable vibe of the place.

On this evening Mr. Malaby's group-the second iteration of this group- featured songs from their new cd titled Voladores. They brought instruments that included toms, snares, cymbals, bells, chimes, toy xylophones, multiple mallets and assorted percussive instruments of the two drummers, Tom Rainey and John Hollenbeck (who replaces Michael Sarin from the first album line up), along with the double bass of Drew Gress and Mr. Malaby’s saxophones.

According to Malaby, the two drummer format was born “… a couple of years ago when he performed several times with two drummers and loved it: It's just (like) the most comfortable couch, or like taking a warm bath, just being surrounded by that sound and falling into it." "I decided to try to create platforms for my favorite 'zones' that we'd developed or would hit on.”

Playing in a zone is a good way to describe what Malaby does. His musical conceptions seem to be loosely structured. They are mere skeletal armatures on which to build his creations. He and his fellow musicians breathe life into each composition as they add layer upon layer of skin, sinew, nerve and flesh. They organically, through improvisation, create the music you hear.

The group led off with an Ornette Coleman composition titled “Homogenous Emotions”. Here Mr. Malaby showed his ability to emit bellowing deep tones or switch to high-reaching screeches on his tenor with ease and fluidity. On “Old Smokey” the group showcased how deftly they could telepathically negotiate multiple time changes. The creative juices were flowing for Hollenbeck, who on what appeared to be a child’s xylophone, created the eerie sound of swarming locusts as he played the unlikely instrument with seed filled mallets.

Hollenbeck was especially mesmerizing as he utilized a variety of instruments in his percussive arsenal creating an at times surreal groundwork. This allowed Malaby the option to soar or ponder on both tenor and soprano saxophones as the mood suited him. The powerhouse bassist Gress and drummer Rainey provided what bottom the music allowed. Gress, at times, seemed unsure of what direction the music was taking him, but his arco work was particularly well matched with Malaby’s deeply toned tenor on the aptly titled “Dreamy Drunk”.

On “Sour Diesel” Gress played a repeating bass line as Malaby played soprano saxophone and Hollenbeck played what appeared to be a combination of bells and a breath-actuated keyboard. The unusual sound that Hollenbeck produced was a most effective counterpoint to the soprano. By about halfway through the song, Malaby had switched to tenor where his performance was the most poignant of the evening. The group ended the set with the title composition from the new release“Voladores”.

As an avant-gardist Tony Malaby’s concepts are daring, musically challenging, and worth experiencing. They can certainly be outside the comfort zone of those looking for modern music that is still lyrically and rhythmically traditional in its approach. Malaby’s music however represents a dynamic, restless spirit that continues to push the boundaries of what music is supposed to be. From such explorations great things can come. With the members of Apparitions

he has found like-minded musicians that can allow him to realize this musical vision.