The Maestro of Cool Lee Konitz with Mark Turner, Ethan Iverson, Ben Street and Albert “Tootie” Heath at The Iridium 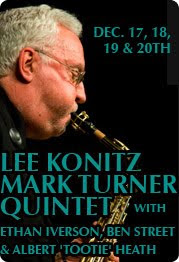 Sunday December 19, 2009 1st Set
On the pre-holiday Sunday before Christmas, I made my way down to experience the economical and unadorned artistry of alto legend Lee Konitz in a rare club appearance at The Iridium Jazz Club in New York City. The iconic Mr. Konitz was tantalizingly paired with the tenor saxophonist Mark Turner, a player known for his fine tone and judicious use of notes. This meeting elicited images of the famous sessions that at one time brought together Konitz with tenorist and fellow Lennie Tristano alumni Warne Marsh decades earlier. 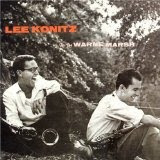 Mr. Turner has his own credentials as a leader with his trio Fly (with the bassist Larry Grenadier and the drummer Jeff Ballard) garnering considerable accolades for their recent recording Sky & Country 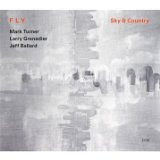 On this appearance, Mr. Konitz and Mr. Turner were joined by Ethan Iverson (of The Bad Plus fame) on piano, Ben Street on acoustic bass and the veteran Albert “Tootie” Heath on drums.

I arrived to the club early with a friend and was seated stage left when as fortune would have it Mr. Konitz came walking from behind the stage and sat right next to our table, looking to have a bowl of soup prior to his first set. After negotiating with a waiter to get him the mushroom bisque (an excellent and flavorful choice), Mr. Konitz was gracious enough to stay and talk. My first impression of the man was that at the age of eighty-two he was remarkably sharp and engaging, in a way that belied his age.

It became clear that he was uninterested in re-hashing what he had done in the past. As he said “Reminiscing doesn’t go well with soup.” He is an artist who prefers to live in the present; looking forward being a key to his creativity. Mr. Konitz has led several groups in the past, but for the most part he considers himself a sideman. The economic imperatives of the business have necessitated that he assemble musicians from various locales wherever he appears. The frequent influx of new musical plasma via these associations has been a source of inspiration for Mr. Konitz. Because he insists on unstructured spontaneous improvisation however, not all pairings with other musicians are successful. On this evening he related how during a recent appearance with pianist Brad Mehldau, the bassist Charlie Haden and percussionist Paul Motian, the musical communication was especially “in-sync”, so much so that he felt it was a near euphoric experience. 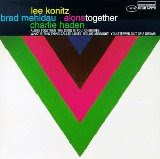 Mr. Konitz was extremely forth coming about who he admired and who he felt as he said “…played too many notes”. His economical use of notes springs from his refusal to pre-arrange what he is going to play in any predetermined or predictably patterned way. I was taken by the journeyman way Mr. Konitz seemed to approach his craft. Dressed in a tan jacket that reminded me of the type of garment worn by a machinist or a precision watchmaker, he was unmistakably ready for work.

The first set started off with a composition titled “Solar”. Often attributed to Miles Davis, Mr. Konitz was sure to point out that it was really a Chuck Wayne composition (based on the song “Sonny”). Mr. Konitz and Mr. Turner immediately commenced with an intuitive display of subtle interplay, the two saxophones at times meshing and at times veering off into opposite directions but always maintaining a sense of the melody. A smiling Mr. Heath seemed to enjoy prodding the group with an array of hi-hat accents and rolls interspersed throughout, all the while maintaining his rhythmic continuity with Mr. Street. When Mr. Turner soloed he did so with a gentle waterfall of notes played in a deep mellow tone. When he played with Mr. Konitz his cadence was particularly well matched with the journeyman’s own.

The second song in this set was a Tristano composition titled “Naidu”, where Mr. Konitz and Mr. Turner once again showed a rare affinity for being able to feed off each others changing ideas. With telepathic skill they delivered these sympathetic thoughts independently and still presented them as one homogeneous statement.

Mr. Turner is a tall, thin player that tends to bend at the knees when he is playing. He compresses then elevates himself vertically during his solo excursions. His lanky appearance further accentuates his elastic playing. His notes are supple and warm and they stretch into and out of tension. Mr. Konitz by comparison offers a sturdy and compact profile that generates great energy from deep within his center. He sways slightly from the waist to the rhythm of the song. He thoughtfully contemplates what his next note will be based on what he is hearing from his fellow musicians, consequently always playing slightly behind the music.

On “My One and Only Love” pianist Iverson, who for the most part was quietly laying back in deference to the Maestro, played a nice duet with both Konitz and Turner.
Mr. Konitz has an impatient streak to him and he frequently and precociously interjected unexpected ideas during Iverson and Turner’s solos.

On “I Remember April” Turner and Konitz once again showed compatibility playing together in beautiful concert. Konitz played with a brightness that was sharp and vibrant. Turner responded with a deferential, lower register tonal burst that intertwined itself into and around what Konitz had just played. Iverson was by now more comfortable soloing with a passionate release of cascading notes that spurred Mr. Konitz on in the best interchange between the two of the performance.

On the final song of the set “What Is This Thing Called Love”, Mr. Iverson played in a percussive rhythmic style that was reminiscent of his work with his regular group The Bad Plus.

Playing as Mr. Konitz does, with no safety net, is a formidable task for most musicians, many of whom are used to having the material more worked out in advance. Mr. Street and Mr. Heath skillfully provided the rhythmic balance that allowed the two lead saxophonists the freedom to freely express themselves in this format. Mr. Konitz, who continues to thrill with his beautiful tone, his quiet energy and his inexhaustible creativity, has found in Mr. Turner the perfect foil whose tone, cadence and delivery is compatible with his own and whose musical inquisitiveness is equally inspirational.