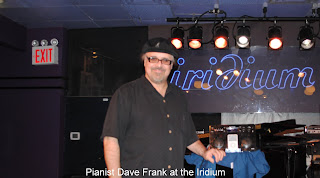 . Starting in February of this year Dave started a unique series of master classes on streaming video where anyone can watch as he delves into the music of some eclectic but brilliant musicians and dissects what they play, why they play it and how it is done. To date he has done master classes on Charlie Parker, Frank Zappa, Bruce Hornsby, Eric Dolphy and Keith Jarrett.

On Sunday, at the midtown jazz club The Iridium, Mr. Frank deconstructed the work of one of his major influences, the pianist Dave McKenna. Mr. McKenna’s work is known for it’s unerring sense of swing and his skillful use of the walking bass line. Mr. Frank has dedicated himself to extending the art of the walking bass line, bringing it to a whole new level of sophistication on his own solo piano work. In front of a nearly full house of friends, students and admirers Mr. Frank started by playing a recording of Mr. McKenna performing the song “Exactly Like You” from the “Live at Mayback Recital Hall”

album. The ebullient Mr. Frank showed his passion and enthusiasm for this music as he described the multiple techniques that Mr. McKenna employed. He then took a second recording “ Dream Dancing” and demonstrated section-by-section the myriad of styles that Mr. McKenna used to make the tune his own.  The professorial Mr. Frank explained terms like left hand 4 to bar chording, windshield wipers, smudging, obvious and implied rhythm, inner chording, tenths and echoing techniques, taking some of the mystery out of what McKenna was doing and demonstrating it on his piano for the audience to follow.

When the class work was finished the audience was treated to some of Mr. Frank’s own superlative playing. After demonstrating some “burn” with an impossibly complex walking bass line, he played the contemplative “Indian Summer “ from his album “Power of the Piano”, showing the more sensitive side to his playing. He introduced a new song “Midtown 9 am” from his upcoming album “Portraits of New York”, an impressionistic aural representation of the hustle bustle sounds of morning in New York City.  He played another moving ballad “Prayer at St. Patricks’s” which is from his “Turning it Loose”

cd from 2008. He ended the set with his “Broadway Boogie Woogie” another smoker that included many of the techniques he described in the McKenna master class, showing that he practices what he preaches. 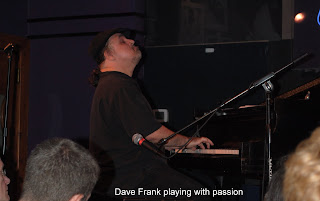 For those who admire solo piano jazz, Dave Frank is certainly an artist of immense skill and deep passion. His artistry is a combination of blazing speed, sly humor and unerring consistency, especially in his walking bass lines. His technical virtuosity is unquestionable, but it may well be the ever-developing sensitivity that he shows on his ballad work that will eventually put him on another level.